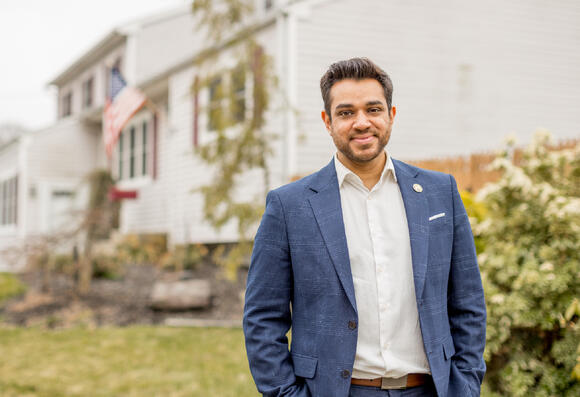 Town Council Vice President Sam Joshi has been working in public affairs since he was 14.Courtesy of Sam Joshi

(EDISON, N.J.) After winning an intense Democratic primary that made headlines statewide, Town Council Vice President Sam Joshi is hoping Edison residents will choose him to be their next mayor.

Joshi got his start in city affairs at age 14 as an intern at the Edison Senior Center. He later worked on campaigns and other township initiatives before serving on the Fair Rental Housing Authority, the Zoning Board and ultimately the Town Council.

“The more I learned about policy, I was just more and more interested,” he said. “I ran for council in 2017. It's now three and a half years that I've served on the council, and I love every part of my job. I wish I can do more and that's why I ran for mayor.”

To best serve the residents, Joshi said he will serve as mayor full-time in order to respond to issues as soon as they arise. He said a number of issues need to be addressed in Edison, which will start with implementing a new master plan, which has not been updated for around 30 years.

“Everything from our overdevelopment problems to our schools to our local economy — it all ties back to the master plan,” he said. “In order to efficiently address that, we have to make sure that everything is zoned correctly. We need to make sure that we are projecting Edison's future, not just a decade, but decades from now.”

Joshi has proposed a number of projects aimed at revitalizing the town. His one long-term goal is to build a marina alongside the Raritan River, which would have restaurants and shopping areas. The project would take about seven years to complete and would be paid for by private companies.

His opponent, Hahn, has criticized the marina plan due to environmental concerns. Joshi said the region Hahn is referring to is different from the one where the marina would be built.

Other shorter-term projects include modernizing an area of Woodbridge Avenue, creating a women’s history museum on the Middlesex Greenway and renovating Edison’s parks. He said parks can be improved through adding different fields for sports or installing exercise equipment. His website uses Polansky Park as an example, but he said all parks ultimately need to be updated.

Joshi also said he plans on working with county and state officials to secure funding that would facilitate the construction of new community centers, but said parks can be addressed first since these projects are more manageable.

“The good part is that with parks, it's comparatively less expensive, and we can move on it much quicker. We can upgrade several parks throughout the entire town,” he said. “We can do things in a park outdoors that is much more affordable to the taxpayers [and] much more economical overall. That would be the reason why we tackle the parks first. With the community centers, we need to have more than one — that’s just the reality.”

In terms of more practical issues, Joshi said he wants to focus on stabilizing taxes. One of his primary goals, which could help generate revenue, is to implement municipal broadband to offer an alternative to Optimum. He said the company currently owns all of the hardware and wires and controls the town’s internet prices.

“We have a monopoly right now because internet service providers throughout the country choose not to infringe on each other's territory,” he said. “The single biggest misconception is that it's an exclusive contract. It's not. It's never been an exclusive contract. Any other internet service provider can come to Edison if they want to — again, they choose not to.”

Joshi pointed out that other municipalities have successfully implemented municipal broadband and added that reliable internet access is important to help Edison’s economy.

With municipal broadband, the town would own its own cables and internet hardware, enabling Edison to negotiate prices. Currently, Joshi said the average household pays around $139 monthly to Optimum.

“That equates to more than $25 million per year that Optimum is making every single year. It costs $90 million to implement municipal broadband throughout the entire township over 30 years. The math alone — it is a no brainer,” he said. “So, instead of spending $25 million on a private company that gives us garbage, crap service, we would be able to dictate our own terms, and we can generate more revenue than any other municipality has.”

In regard to other economic issues, Joshi is opposed to the rise in warehouses around town, which he said have been encroaching on residential areas. He said Edison should look to create jobs in fields like science, healthcare and education by partnering with institutions in the area, like Hackensack Meridian Health, Robert Wood Johnson, Rutgers University and Middlesex County College.

Joshi’s campaign platform also aims to assess areas where the town can engage in public-private partnerships to help with long-term infrastructural growth. In 2019, Edison residents voted against privatizing the water and sewer system through a company called SUEZ — a company Joshi said would not be returning to Edison under his administration.

Joshi secured endorsements from a number of prominent Democrats, which he said better position him to secure resources for the town compared to his opponents. He added that his record shows that he is not necessarily a conformist either.

“The reason why these endorsements matter is because for too long, Edison residents have said that we've not gotten our fair share from the county or the state (or) the federal government,” he said. “Because of my relationships on a local, county, state and federal level, Edison Township will have more money coming into Edison than ever before.”

Going into November, Joshi said his campaign will be much larger than the primary. He said he is looking forward to participating in debates and town halls to help residents better understand his platform and character.

“I've chosen to live here because I want to make a big difference in this township. I bring a completely new perspective. You see that in not just my vision but my plans,” he said. “Residents can count on a transparent future with one that prioritizes the needs of Edison residents.”