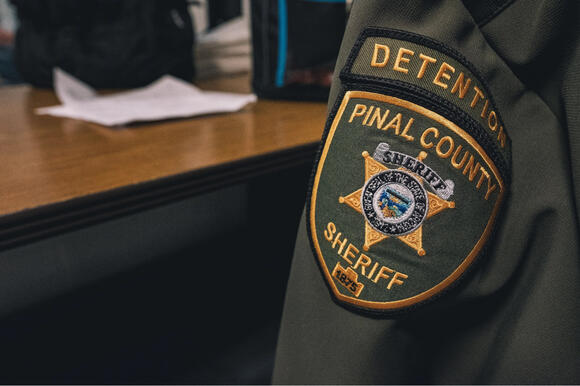 At a Board of Supervisors meeting last week, some residents said they felt Lamb, a Jan. 6 sympathizer, proponent of conspiracy theories and a Fox News regular, is only concerned with power.

“It’s become apparent that Sheriff Lamb is crossing a line that we consider to be dangerous. ...He does not represent us, and we fear that he will fail to uphold his oath of office to serve and protect us.”

Lamb, who runs the rightwing group Protect America Now, is one of dozens of sheriffs who ascribe to the idea of "constitutional sheriffs" -- an idea that, within their jurisdictions, sheriffs have the ultimate authority including above state and federal entities.

Susan Wortman, a resident of Casa Grande whose late husband, Randy, was a member of the Sheriff’s posse under former Sheriff Chris Vasquez, said she thinks Lamb is more focused on power than his job “so he seems to be selective about which laws he’s enforcing.”

Another resident criticized the mission of Protect America Now (which says it is made up of "[s]heriffs and law enforcement members that believe in God, Family and Freedom”).

“We actually saw Republicans win their races," she said. "We saw the Pinal County Board of Supervisors with a Republican majority certify the 2020 election."

Noel Reck of Casa Grande said that Lamb’s statements and those of the organizations he’s involved with are working to subvert, not protect, the electoral process.

“This outside interference explains why some poll workers and officials are leaving their positions, many afraid for their lives,” Reck said.

Some of the residents who raised concerns asked the board to investigate the Pinal County Sheriff’s Office and Lamb’s conduct. The Board of Supervisors said it has not yet reached a decision on how to respond to the residents’ complaints.

The Pinal County Sheriff’s Office did not respond to requests for comment.