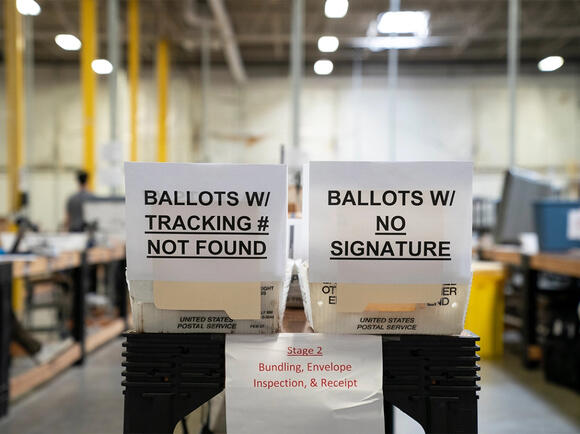 About 60,000 incorrect mail-in ballots were sent earlier this month that left off municipal elections for some – and included them for others who are not eligible to vote in those contests.

The error was caused when incorrect information was put into the computer system, officials said. No elections besides municipal ones were affected.

Anyone not located in these cities or located in unincorporated areas are not affected, officials said.

Here’s what you need to know to ensure your vote counts:

How do I know if my ballot was affected?

Those who aren’t sure if they’ve been affected can also check by searching their address with the county’s online tool.

My ballot was bad. What now?

Those who received early voting ballots by mail will receive a second “municipal only” ballot for their city or town’s elections.

So, what do I do with my original ballot?

Voters can use their original ballots for federal, state, legislative, and county elections – but the municipal section on those ballots will not be counted.

Officials said that both ballots should be sent in separately in their original affidavit envelopes and signed by the voter as usual.

I voted early in person. What should I do?

For those who visited an early voting site, officials say voters will need to return to a site to request a municipal-only ballot before July 29, or visit a voting site on Election Day, August 2. Those who have already submitted their early voting ballots only need to complete the new ballot.

Where were the bad ballots sent?

I’m planning to vote in-person on Election Day. What do I need to know?

In-person voting on Election Day won’t be much different than usual.

Residents in the seven affected cities and towns must simply go to a polling site on August 2 and complete two ballots: one for municipal contests and a second for all other elections.

Voters can use Pinal County’s online map for election polling sites to find a convenient location.

How did this happen in the first place?

Pinal County elections director David Frisk took full responsibility for the mishap, and Hobbs said the Secretary of State’s office will continue to assist Pinal County officials while they work to rectify it.

Secretary of State Katie Hobbs said that an investigation from the office verified the source of the error.

Coming on the heels of baseless voter fraud accusations that led to the audit of Maricopa County’s 2020 presidential election results, Pinal officials said retaining the public’s trust in the process is paramount.

“As a county, we strive for excellence, trust and transparency, particularly when it comes to elections, and we recognize the significance of these errors,” said a statement on Pinal County’s website.

Officials established the two-ballot solution last week. Since then they’ve been working to spread awareness about the change and ensure Pinal’s residents get their votes counted.

Pinal County posted a list of frequently asked questions about the ballot issue on its website, and anyone looking for more information can call 520-509-3555 or email communications@pinal.gov.

All Arizonans can also verify their voter registration and track their ballots after sending them through the Secretary of State’s voter information portal.