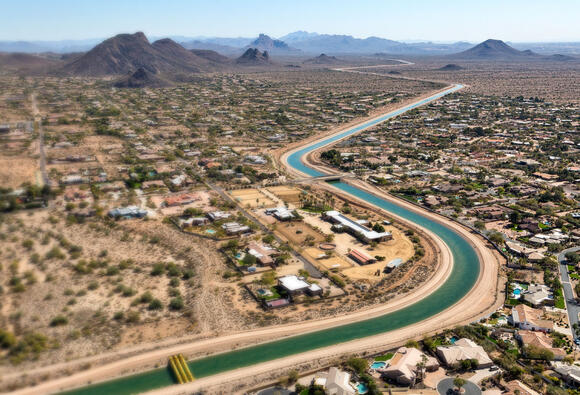 Ducey announced the plan as Arizona continues to struggle with water shortages and cutbacks.

Water supply from the Colorado River has already been reduced. Metro Phoenix, Pinal County and Tuscon are seeing less water delivery from the river through the Central Arizona Project’s canal system and more cuts are on the horizon.

The funding is intended to aid affected areas by creating an effective financial system for the Department of Water Resources, Ducey said.

Funding from the bill will be allocated to different water conservation measures such as drought resistant landscaping, watershed protection or upgrades.

At a signing ceremony for the bill, Ducey said the culmination of Arizona’s water struggles have “made it necessary for us to act,” to protect current communities and future generations.

The west coast has been experiencing an ongoing megadrought across the region for two decades.

Without the usual amount of water from the Rocky Mountains snowpack, the Colorado River and its major reservoirs have been dropping dramatically. Water levels in Lake Mead are hitting historic lows, and Lake Powell has sunk to its lowest level since the reservoir was filled in the 1960s.

According to the Department of Water Resources, Arizona residents use about 146 gallons of water per day on average. Most of Arizona’s municipal water use is residential, and 70% of that water is used outdoors for swimming pools or watering plants among other things.

Agricultural industries weigh on the state’s water supply through the unregulated drainage of groundwater from industrial farms.

The state is a leading producer of cotton, lettuce, and hay as well as cattle and dairy products, and groundwater makes up around 40% of Arizona’s water supply.

Until now, Arizona’s policies and a shift from agriculture to urbanization in large areas have kept water use levels in the state almost stagnant despite years of growing population numbers.

Arizona’s population has grown by six million residents since 1957. According to 2020 Census data, the state’s population grew by almost a million compared to 2010. Concerns of undercounting in 2020 also means the number could be larger.

Climate change and a population boom in recent years has rendered the current measures inadequate.

Ducey’s water plan is one measure among many that Arizona has been taking to tackle water conservation.

In order to keep water supplies under control in Lake Mead, Arizona is paying water providers $40 million if they agree to leave their water in the lake for this year and next.

Arizona is also looking to diversify its water supplies through various deals with nearby states.

Some alternative sources the state is eyeing include pumping Mississippi River flood waters to either Colorado or the Gila River in New Mexico where it could flow to Arizona.

Ducey also announced a plan earlier this year to build a desalination plant to increase water supply, and told KTAR last week that he is aiming to have a deal in place before the end of his term.

Although these options could potentially offset some current losses, making projects like these a reality is expensive.

Building a pipe to pump the water through this new route is estimated to cost $8.6 billion. It could cause water prices to soar from under $200 per acre-foot to $1,700. Arizona’s total statewide water use was approximately 7 million acre-feet in 2019.

Ducey’s desalination plant would also be costly, estimated to be around $5 billion.

Conservation measures have proven successful for Arizona in the past, but experts have established that it’s clearly not enough anymore.

While Arizona’s population and ensuing development continues to boom, keeping up with water planning requirements and ensuring all areas have sufficient supply is going to become increasingly difficult.