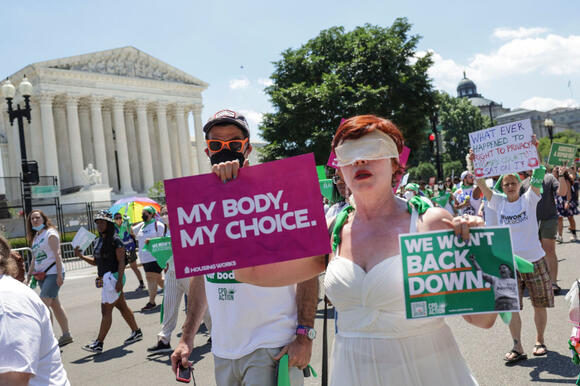 Abortion rights activists protest outside the U.S. Supreme Court on the last day of their term on June 30, 2022 in Washington, DC.Kevin Dietsch/Getty Images

Since the Supreme Court decided to eliminate a constitutional right to abortion, Arizona providers, advocacy organizations and politicians have been clashing over what it means for state policy.

Different groups argue that abortion is still legal in the state, while others claim an old law is back in effect after the repeal.

All but one of Arizona’s providers have decided to stop offering abortion services on account of the confusion.

Arizona lawmakers are at odds over what laws should go into effect after the Supreme Court decision. Arizona attorney general Mark Brnovich claimed that a pre-statehood law banning all abortions should be enforceable and he plans to file to remove the injunction blocking it.

Governor Doug Ducey said a law he signed in March that bans abortions after 15 weeks takes precedent and should be what’s enforced.

Although providers have suspended services over concerns of facing legal action local organizations and individuals say that the laws are too uncertain, or even not enforceable.

Volkmer didn’t confirm whether the office would prosecute such a case, but he said they don’t make the laws, but it’s also unlikely the county would see such a case as there aren’t any abortion clinics in Pinal County to his knowledge.

The office hasn’t established a way to address the overturning of Roe v. Wade, but Volkmer said the 15-week abortion ban will likely go into effect.

Arizona’s chapter of the American Civil Liberties Union and other abortion-rights advocates have also moved to block another law that would grant “personhood” to a fetus.

The ACLU also said that the 1901 law cannot take effect without lifting the 1973 injunction placed upon it.

Conflicting reports about whether or not previously blocked laws can be enforced has pushed clinics to stop operations over the growing risk of legal prosecution.

Planned Parenthood Arizona posted a statement from CEO Brittany Forteno that the group was outraged by Brnovich's “cruel and callous effort.”

"It's unconscionable and drastically out of line with the 7 in 10 Arizonans who support abortion access."

Phoenix and Tucson leaders have already spoken out about their unwillingness to enforce either laws being debated.

Phoenix Mayor Kate Gallego told Axios that she plans to work with city attorneys to “protect our residents and women's health care." Gallego also called such efforts a “waste of resources.”

Polls show that a majority of Arizonans support abortion rights. As officials and organizations continue to fight over what, if any, laws should be enforced, most of the state will be cut off from professional abortion services indefinitely.