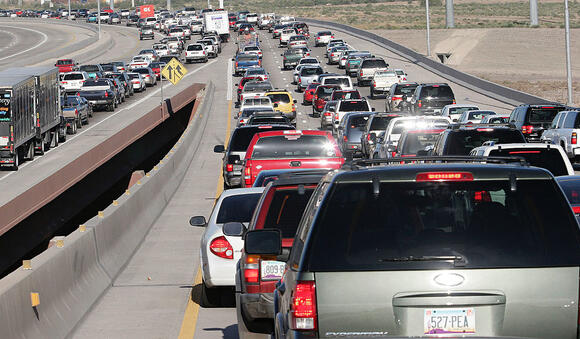 Maricopa’s population and development has been booming and now the city is getting an east-west transportation corridor.

This week, city council officials said in a press release that ground had broken on the Sonoran Desert Parkway project, which was originally announced three years ago.

The parkway will consist of four lanes beginning at the Ak-Chin Casino entrance. It will follow an existing alignment on Farrell Road to Porter Road, then turn north and construct Porter Road with a new bridge over the Santa Rosa Wash.

The connection, officials said, will be essential for improving regional traffic circulation and local access. It’s also the first part of a “high-capacity, multiphase corridor” that is planned to link Interstate 10, Casa Grande and Maricopa.

Both Maricopa and Casa Grande have major transportation facilities to connect to larger highways going north and south, officials said. But the area lacks a sufficient route going east and west to better connect the cities. Officials said the first phase of the project is expected to last at least 13 months.

Maricopa mayor Christian Price said that the new corridor is a “key and critical project” for the city, and, “a journey of a thousand miles starts with a few steps."

According to the U.S. Census Bureau, Maricopa grew by 6.1% in 2021, the eighth highest nationwide and fourth among Arizona cities. Maricopa is also ranked just under Casa Grande, which reported a 6.2% population increase in 2021.

The census report also ranked Maricopa County as second among the top five counties with the largest numeric gains in housing units between July 1, 2020, and July 1, 2021.

Maricopa County added almost 30,000 new units last year, but its housing market remains hot and pricey. As a result, buyers are sprawling out to Pinal County and cities like Maricopa and Casa Grande with hopes of living in a community they can afford.

With a population of around 62,000, Maricopa is still small. But developers are closing in on the town with several major projects that would bring new residences and business to the area.

The $87.8 million project is being funded in part by a $46 million bond transaction through the Arizona Industrial Development Authority, a nonprofit corporation and political subdivision of the State of Arizona dedicated to funding more affordable housing statewide. The Arizona Department of Housing also contributed $4 million to the project.

As cities like Maricopa see extreme growth in both population and prices, affordable housing projects like this one are an essential part of developing an area without pricing out locals.

Maricopa also approved a development in May that would bring the city its first townhome residences. The proposed development, called Villas at Stonegate, plans to put in 318 units on a 16-acre plot.

The development has drawn concerns from local officials and residents, but the consensus is that the project will bring much needed housing options for homebuyers.

Just last week, Maricopa Unified School District also cut the ribbon on phase one of the district’s second-ever public high school. The new campus will have capacity for 1,300 students and 600 freshmen and sophomores have already enrolled for the upcoming school year.

Maricopa has remained a small city for a long time, but with its current trajectory the community is likely to get much larger in the coming years.