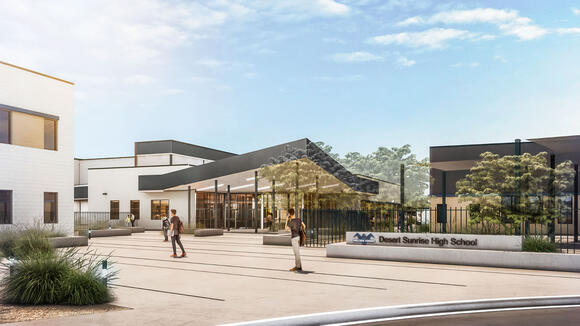 Maricopa district’s superintendent Tracey Lopeman said the building will eventually be a 125,000-square-foot school built across an 80 acre campus. The school will be Maricopa’s second-ever high school since Maricopa High School opened in 1955.

Desert Sunrise, Lopeman said, will accommodate 1,300 students and 600 freshmen and sophomores have already enrolled for the upcoming school year.

Phase one of the school’s construction includes a two story classroom building as well as a cafeteria, music building, sports facilities and an administration building.

The second phase includes building more sports facilities and a Student Commons Building which will include a media center and performance stage, as well as a college and career counseling area. The project’s architects and building team expect phase two to be complete by next summer.

Although there’s already a third phase planned, a timeline hasn’t been determined yet. Lopeman said the third phase could add more arts, career and technical education classes to the new campus. Lopemen also said a competition gymnasium complex, tennis courts, additional baseball and softball fields, and grandstand seating will all be added as well.

The name of the new Desert Sunrise High School was also revealed alongside more information about the school and its programs.

According to the district, Desert Sunrise will offer focused “career academies” where students can learn about specific topics alongside core curriculum like English or science. There are over a dozen specialized courses and electives across the STEM Academy and Leadership Academy.

So while learning typical classes, students will also have the choice to take courses on topics like engineering, app design, digital communications or agriscience.