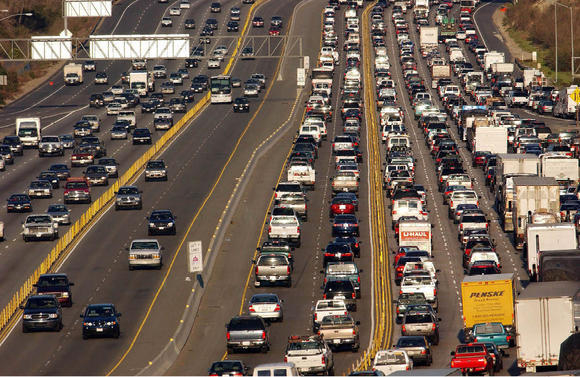 The plans to expand the I-10 and improve the trip from Phoenix to Tucson announced this year are going full steam ahead, according to Gov. Doug Ducey.

The $700 million project, announced during Ducey’s State of the State address in January, is focused on adding more lanes to the segment between Chandler and Casa Grande known as Wild Horse Pass. This part of the freeway is the last stretch to only have two lanes.

The project is a highly anticipated upgrade to the highway that’s constantly full of commuters, vacationers and commercial drivers going back and forth between two of Arizona’s largest cities.

The investment is being allocated through bipartisan-backed Senate Bill 1239. At a signing ceremony for the legislation, Ducey said he’s following through on his earlier promise to prioritize the project.

“This legislation ensures that everyone in Arizona can get to their destination safely and quickly, even as our state continues to grow. We’re not going to have the endless traffic jams you see in cities like Los Angeles, where men and women are stuck in their cars for hours every day,” Ducey said.

The comparatively narrow section of the I-10 has long been a cause of congestion, and has even proved to be a threat to drivers’ safety.

Expanding, officials said, will ease congestion that frequently plagues the area, improve safety conditions for drivers, and enhance economic development for the area surrounding the highway.

The expansion will make the section of highway three lanes and extend the HOV lane. $400 million of the project’s funding comes from the state while the other $300 million is from a federal grant.

The project is estimated to cost just under $1 billion, with nearly $700 million in state-dedicated funding. Officials also said Arizona’s upfront investment will give more opportunities to secure federal funds for the project.

Ducey announced a $230 million cash injection for new transportation infrastructure investments in 2021. In addition to this project, the funding is also expected to be used to update the Gila River Bridge on I-10, widen U.S. Route 93, add capacity to I-17, and improve more than 600 highway lane-miles statewide.

John Halikowski, director of the Arizona Department of Transportation, said improving the conditions of the I-10 is an essential component in boosting the state’s economic growth.

“The Governor’s investment into the expansion of I-10 is the leadership that is needed to lock in Arizona’s future as an economic powerhouse and continue to improve the quality of life for all Arizonans,” John Halikowski said in a statement.

The Arizona coalition ONE Community will be holding a highly interactive virtual event to give job seekers the opportunity to learn about inclusive companies and network with professionals.

Dogs are getting a new recreation destination in Apache Junction

Apache Junction dog owners will have a new spot to take their pups with the opening of the Dutchman Dog Park on the County's Apache Junction Complex. The park was created as a collaboration between Pinal County and the City of Apache Junction.

Maricopa has approved a development that could bring the city its first townhomes. The proposed development, called Villas at Stonegate, is a 16.1 acre plot at the southwest corner of Stonegate Road and Alan Stephens Parkway. The current plan is to put in 318 units with options of one-, two-, and three-bedroom homes.

Pinal County restaurants had another month of stellar performance on their food inspections in April. Almost all restaurants received an Excellent rating, only a handful were given a Satisfactory rating, and none got marks lower than that.

Last week, a former Pinal County real estate agent was sentenced to almost four years in prison for defrauding an acquaintance with a fake real estate investment. Sarah Nicole Kelley of Coolidge was found guilty of scamming two family friends. In 2017, she took $55,000 from one in a Pinal County real estate investment and another $130,000 claiming it was to help save her sister’s home from foreclosure. She also defrauded another family friend out of $647,000 in a similar way.

With a recent mosquito outbreak in Maricopa, Pinal County officials are warning residents to take precautions to avoid bites. Mosquitos are as synonymous with Arizona summers as scorching heat, but with some simple measures, you can keep them away from your yard and off your skin. Here’s 5 tips to prevent mosquitoes from sticking around, and what to do to treat a bite.

As most of Arizona counties’ new COVID-19 cases dwindle to low double digits, Pinal County reported 982 new cases this week. Pinal had more cases than any other county in the state, and over 200 more than Pima County, which had the second highest amount. Pinal has the third highest number of cumulative cases in the state by county behind Maricopa and Pima.