Get your ballot in: Final day to vote in the CA Recall this coming Tuesday

Tuesday will be the final day to cast your ballot in the CA gubernatorial recall election. Come get your sticker!Element5 Digital / Unsplash

The California Recall election has been a contentious and high-pressure event for over a year, since its first announcement in Feb. 2020. Now, the deadline has finally arrived for en election that could shake up the future of California.

If more than 50% of voters vote "yes" on the first question, the next highest polling candidate will take on the job, regardless of how many voters voted for them.

The state began sending out ballots to registered voters on Aug. 16, providing the option for constituents to return their ballots via mail, in-person at polling places and drop-boxes, or in-person at voting locations from now through Sept. 14.

Approximately 28% of ballots have already been cast by registered voters, amounting to just 6.1 million Californians. Compared to the general election and presidential election in Nov. 2020, those numbers aren't far off, with just 29% of Californians voting up to a week in advance of Election Day.

According to California's Public Policy Institute Vice President Paul Mitchell, however, there is still a fair amount of work to be done among many polling groups, even if Newsom's ousting seems unlikely at this point.

“Democrats, young people and Latinos are underperforming relative to the 2020 General,” he said. “But, again, that’s not really the required mark – the recall effort will need a much deeper tanking from these more progressive parts of the electorate, and a simultaneous spike in Republican turnout, to be successful.” 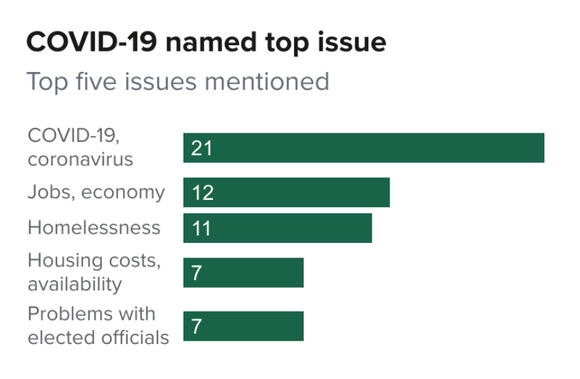 Many voters name COVID-19 as the major issue for which way they're voting. Newsom has been fairly stringent in his statewide mandates to protect Californians from COVID-19, but has also faced a great deal of criticism from small business owners, essential workers in the food industry, and Republicans. A birthday party at Yountville's the French Laundry in Nov. 2020 also led to wide criticism across the state, especially as COVID-19 surges continued through the fall and winter months.

In his recent bid to ensure he is not recalled, Newsom has called upon some big-name Democrats for their support, including Sen. Elizabeth Warren, former California senator and Vice President Kamala Harris, and former presidential candidate and Sen. Bernie Sanders.

Those endorsements seem to have helped, with recent polling from U.C. Berkeley's Institute of Governmental Studies showing 60.1% of likely voters planning to vote no on the recall.

Yet, the final result will really depend entirely on the turnout, as evident from the Nov. 2020 and Nov. 2016 general elections.

Learn where your polling place is in Santa Clara County and more information about the ballot via the County Registrar of Voters.

More from Grace Goes on an Adventure

The leaves are a-changing: How to enjoy the start of fall across Santa Clara County

One of our favorite fall activities is to go to a pumpkin patch. Luckily for Santa Clara County residents, there are a ton to pick from.Mark Duffel / Unsplash. Yes, yes indeed. And thank goodness for glorious start to the autumnal season!

Cyclists shouldn't feel exhausted by the bike lane for much longer; starting this week, Foothill Expy will update its bike lanes.Jorge Ponce / Unsplash. One of my longest-standing memories of growing up in the Bay Area has always been the packs of cyclists making their way down Foothill Expressway on weekend mornings. People of all different age groups, mostly in colorful spandex, chatting with friends as they glide down the bike lane on the way to grab coffee at Peet's. It was a cherished sight, and one that I was fortunate to join this year as a returning cyclist.

Santa Clara County's Board of Supervisors approved funding to bring up to 300 Afghan families ton the county over the next 12 months.Mo / Unsplash. Nearly one month after the Taliban takeover in Afghanistan following the U.S. withdrawal, many families are still seeking refuge across the globe. Here in the South Bay, local government officials have now approved a funding measure to help Afghan families further.

Still need a Fauci Ouchie? Here's where to get vaccinated in Santa Clara County

The CDC recently released a study highlighting the importance of vaccinations, and Supervisor Chavez hopes the study encourages residents.Steven Cornfield / Unsplash. As we enter the autumnal season, the federal administration has continued its push to get more Americans vaccinated. Here in Santa Clara County, the numbers of fully and partially vaccinated among eligible residents are fairly good — but there is still work to be done.

It's always difficult to be on the housing search in advance of a new school term — but for many UC Santa Cruz students, the search is downright abysmal. A shot of the redwoods in Henry Cowell State Park, close to UC Santa Cruz's campus.Richard James / Unsplash.

A close up of a mosquito. Santa Clara County recently made public that West Nile was found in Sunnyvale and Santa Clara.Wolfgang Hasselmann / Unsplash. Be careful out there, South Bay: a mosquito bite could be deadly.

With the start of the school year just around the corner, many Bay Area parents and families are concerned about sending their young ones back to the classroom. As COVID-19 cases continue to increase and mask mandates are reinforced, it makes sense to be cautious — but today, the health team released a statement to encourage a return.

TGIF: How to keep busy and wind down across Santa Clara County this weekend

One of the best ways to unwind is getting out in nature. Santa Clara County has 28 county parks with things for everyone in the family.Edwin Gonzalez/Unsplash. With more mask mandates in place as COVID-19 case numbers increase, it can feel as though we may backtrack to the days of the early pandemic. While it's important to stay cautious amidst the increasing caseload from the Delta variant, it's further important to take care of yourself, mentally and spiritually.

Bring your card: California leads the charge in vaccine verification for large events

A vial of a vaccine against the novel coronavirus.Hakan Nural/Unsplash. COVID-19 cases have been increasing dramatically nationwide, with epidemiologists citing the much more aggressive and easily transmittable Delta variant leading to surges.

This time last year, Northern California residents dealt with apocalyptic-level natural disasters. A firefighter battles a blaze, part of the CZU Lightning Complex Fire that destroyed 1,490 buildings and over 86,509 acres over 38 days.Stephen Lam/Reuters.

Live in luxury with a local staycation: The Ameswell Hotel opens in Mountain View

It's that time of year where everyone — and yes, we mean everyone — needs one final vacation before the fall hustle begins. Fortunately for Bay Area locals and visitors alike, a new hotel offers just what you need for a night away from home or a quick getaway with lots of fun.

When it comes to eating out, it can be difficult to satisfy everyone's tastes with just one restaurant. You may be looking for a slice of pizza, whereas your partner wants a bowl of pho, and your roommate wants tacos — what on earth can you do?