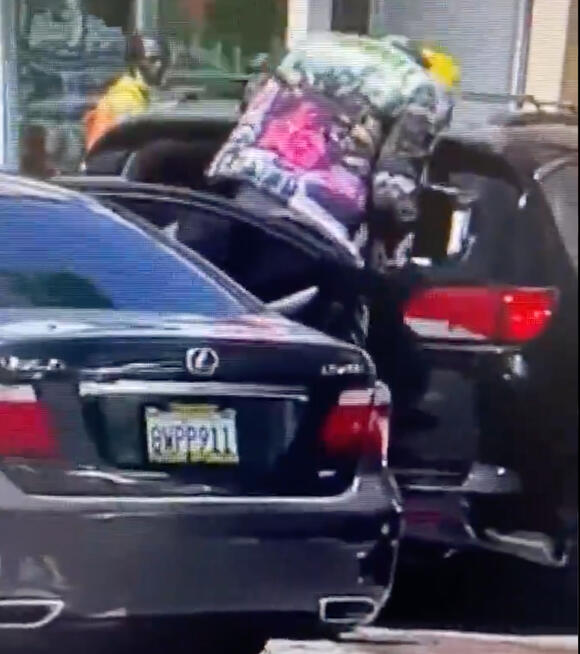 “This brazen crime happened in the middle of the day, in one of our busiest business districts,” said the police chief.via Oakland Police

Police in Oakland shared a shocking video of a car burglar calmly smashing through windows of parked vehicles to steal whatever was inside in broad daylight.

The troubling scene unfolded in front of shocked shoppers who watched the brazen crook hit car after car along Lakeshore Ave., a busy and popular shopping corridor in the city.

Locals said the incident was a common occurrence throughout Oakland, as emboldened thieves — unafraid of repercussions — become more brazen with their crimes.

On “July 21, 2021, at approximately 12:30 p.m., an individual was seen breaking into parked cars in the 3200 block of Lakeshore Ave.,” Oakland Police stated in a bulletin. “Investigators have released this photo/video of the person responsible for committing several auto Burglaries in the Downtown and Lakeshore areas. The photo shows the person investigators believe to be responsible for the auto burglaries.”

Oakland’s police chief expressed outrage by the video, which circulated on social media right after it happened.

“This brazen crime happened in the middle of the day, in one of our busiest business districts,” said Chief LeRonne L. Armstrong. “I thank our community member who safely captured this crime in progress on video, and to those who called 911. Together, we unite to STAND UP FOR A SAFE OAKLAND.”

Police are urging people to report tips so they can apprehend the car burglar. License plates on getaway vehicles are frequently stolen from other cars, which makes criminals more difficult to apprehend.

Commenters stated they are not surprised about the crime, even in one of the parts of Oakland considered safer than other areas.

“He does this because he knows the courts will not do a thing about his criminal activity,” one person stated. “Lawlessness in Oakland is the norm. It's only going to get worse as the Police get defunded and Police leave.”

In San Francisco, the car break-in problem has surged out of control.

According to San Francisco Police statistics compiled by the Chronicle, car break-ins for the Central District, where tourist-heavy Fisherman’s Wharf and Pier 39 are located, exploded a staggering 753 percent in May 2021.

The Oakland crime occurred not too far from Lake Merritt, where officers are trying to crack down on lawlessness. Police this week also shared word of another incident involving unpermitted vendors illegally slinging pot and booze.

“On July 17, 2021, Oakland Police Officers from the Alcoholic Beverage Action Team (ABAT) joined with OPD’s Lake Merritt Enforcement Detail, to identify unpermitted vendors selling marijuana and alcohol in the Lake Merritt area,” police stated. “At 12:30 PM, in the 500 block of Grand Avenue, officers identified an unpermitted vendor selling marijuana. When officers approached the man, he quickly discarded a loaded firearm and ran from the officers. Officers recovered and secured the firearm, pursued the vendor, ultimately placing him under arrest. A second vendor was determined to be selling alcohol. Officers seized the alcohol and cited the man.”