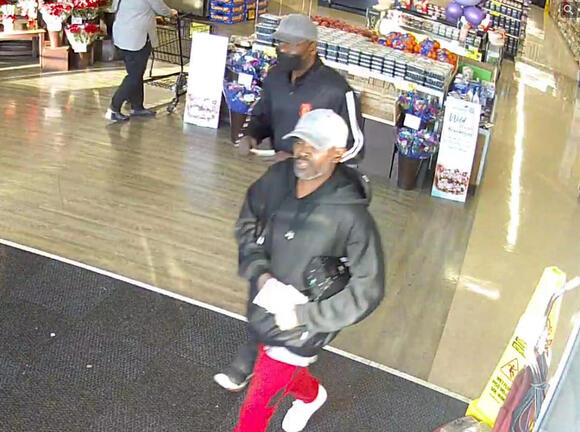 It's the second gunpoint robbery to occur at this popular shopping center in as many weeks. Local residents are alarmed by the increase.Alameda Police Dept.

Police are searching for two men who are accused of holding up a Safeway supermarket at gunpoint on a quiet Sunday morning. Investigators released a photograph of the suspects during their getaway after the brazen robbery.

It happened in Alameda, Calif. on July 18 as employees were getting ready to welcome shoppers.

“The Alameda Police Department is seeking assistance with identifying two individuals. The two individuals pictured, committed an armed robbery (APD Case #21-03251) in the 2200 block of South Shore Center this morning at approximately 6:50 a.m.,” police stated in a bulletin. “One of the individuals was armed with a firearm while both threatened an employee of the victim business while completing the robbery. Anyone with information about the identity of these individuals is being asked to contact the Alameda Police Department at 510-337-8340.”

Police released a photograph lifted from a security camera inside the Safeway supermarket.

“Yeah, I opened our Self-check out service this morning,” a person who said she was a Safeway employee commented. "This event happened just before I was coming into work and opening the registers. All I want to say is bad people need to stay home and think about their actions. As an employee, we don’t get paid enough.”

Other residents also chimed in, concerned about crime in Alameda.

“Please fill the empty vacancies at APD, and get back the reputation for not coming to Alameda to commit crimes or drive dangerously and put people’s lives in danger,” one person stated.

“And, even when we had lots of cops they disproportionally targeted black and brown drivers. So, maybe not a reputation we want to bring back, really,” another commenter responded.

“Of all the times to not wear a mask…,” one person quipped.

“There have been to many crimes at South Shore Center lately,” another commenter wrote. “Next will be the Alameda Landing and Harbor Bay landing too.”

Residents have been alarmed by the increase in crime in Alameda and at the shopping center.

Crime is rare in Alameda, a quiet suburb popular with families who want a laid-back lifestyle while being minutes away from San Francisco and Oakland. South Shore Center is normally teeming with people, particularly in the middle of the day, when the robbery occurred.

On Tuesday, June 15, a trio of armed robbers followed a victim across the South Shore Center parking lot in search of a quick payday.

“Alameda Police Department dispatchers received the report of an armed robbery with a gun at South Shore Center,” police stated. “Once at the scene, officers were advised that a silver SUV, similar to a Chevy Equinox with three occupants, pulled up to an adult male as he was attempting to enter Safeway. One suspect exited the vehicle, pointed a gun at the victim, and demanded his property. A brief struggle over the items ensued. A second suspect exited the vehicle, pulled out another gun, and demanded the victim’s property. The victim complied, and the three suspects fled northbound on Park Street, likely turning east on Otis Drive towards Fernside Blvd.”

Shaken from the incident, the victim was not seriously harmed.

“At this time, APD detectives have determined the silver SUV entered the South Shore Center parking lot around 9:50 am and parked within view of the shopping center’s banks,” police continued. “After a brief time in the parking lot, the suspects observed the victim exiting one of the banks. The suspects circled in the parking lot and robbed the victim as he attempted to enter Safeway at 10:05 am. The vehicle was last seen fleeing north on Park Street and is believed to have turned onto Otis Drive.”