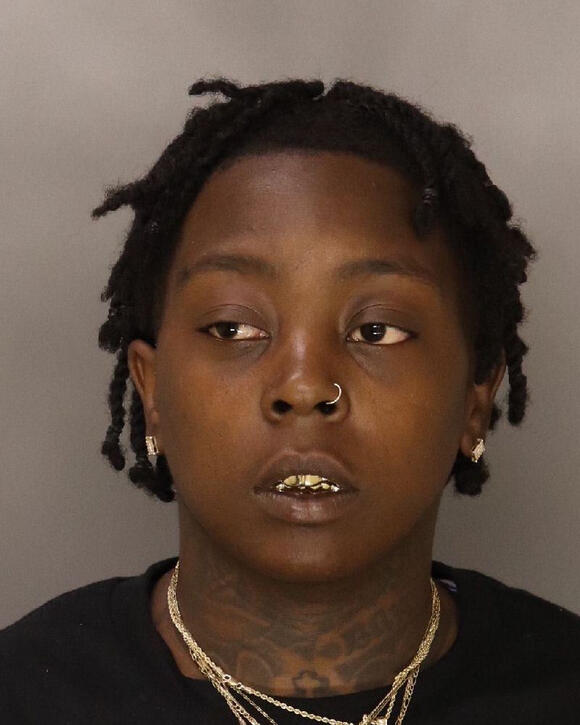 The suspect was found asleep behind the wheel in a lane of traffic on a Silicon Valley street, police said.Mountain View Police

An Oakland woman was arrested by a police officer in a Silicon Valley town after she’s accused of falling asleep while under the influence of drugs while behind the wheel of her Jaguar.

When the officer searched the car, police said they found cold hard cash, packages of cannabis, and a loaded handgun.

“Around 11:20 pm on July 17, a Mountain View Police Department officer on patrol spotted a Jaguar sedan stopped in a lane at Grant Road and North Drive,” investigators stated in a media bulletin. “When our officer approached the vehicle, they found 28-year-old Dominque Porter asleep at the wheel. Our officer also noticed a strong odor of cannabis emanating from inside the car. Our officer safely had Porter step out of the car and after field sobriety test, Porter was arrested on suspicion of driving under the influence of drugs.”

“After safely detaining Porter, officers conducted a search of the vehicle and subsequently found a loaded handgun, several pounds of cannabis and concentrated cannabis, as well as more than $1,000 in cash,” investigators said. “Porter was booked into the Santa Clara County Jail for possession of a loaded firearm while under the influence, carry a concealed firearm in a vehicle, possession of a loaded firearm in a vehicle, armed with a firearm while committing a drug offense, possession of cannabis for sales, and transportation of cannabis for sales, in addition to the driving under the influence charge.”

Police credited the alert police officer for ensuring the situation was resolved safely.

“This was excellent work by our patrol officer, from start to finish,” said Deputy Chief Jessica Nowaski. “His work kept the community safe, and we are relieved that this incident was peacefully resolved.”

This is the latest incident where Bay Area police officers took a driver into custody who was passed out, allegedly from drugs and/ or alcohol. Last month, police in Hercules confronted a woman who appeared to be passed out at the wheel.

“On June 13, 2021, at 2:47 a.m. An officer saw a tan 2001 Toyota Avalon stopped at a gas pump at Shell gas station at 3900 San Pablo Ave.,” Hercules Police stated in a media release. “The driver appeared to be passed out at the wheel. There was a vehicle stopped behind the Avalon, and the driver reported the Avalon’s engine was still running. The Officer was unable to get the driver to wake up by knocking on the passenger window. The Officer saw an open bottle of Tequila on the passenger seat (partially empty).”

That’s when the officer continued to take action to try to wake the driver.

“The Officer eventually got the driver to wake up and turn off the ignition,” police continued. “While talking to the 50-year-old female driver of Sacramento, the Officer observed objective symptoms of alcohol intoxication. The officer also saw a Black “police-style” Baton on the front passenger floorboard.”

In another unrelated incident, police officers in Daly City pulled over a vehicle in San Francisco and made a startling discovery.

“On Wednesday, June 23 at 7:47 p.m., following a traffic stop by Officer Smith at Geneva Ave. and Bayshore Blvd., a 21-year old Oakland female and a 19-year old San Francisco male were arrested for having approximately 790 grams of fentanyl, crystal methamphetamine, heroin, Alprazolam and Oxycodone pills in their possession,” Daly City Police stated. “They also had a large amount of packaging materials, manufacturing materials, scales, cellphones, and cash.”

That’s when Officer Smith made a startling discovery when he looked to the back of the car.

“The female’s young children, ages 1 and 3-years old, were in the backseat without a seatbelt or car seat, and they were in reaching distance of the dangerous and illegal drugs. Child Protective Services took the children into protective custody.”