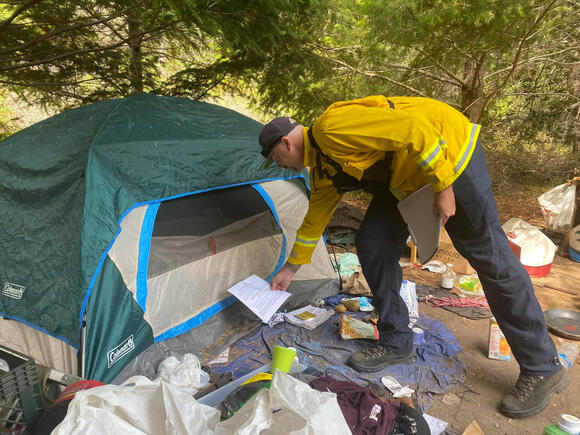 Homeless encampment fires in California are becoming more frequent and more dangerous. One city has had enough.Santa Cruz Police

With more and more fires started by California’s out-of-control homeless encampments, one city is clearing out the makeshift open-air communities to mitigate fire danger as the state endures the most dangerous wildfire season ever.

Santa Cruz Police announced it teamed up with the local fire department to clear encampments that have sprung up and grown in its open spaces beside popular hiking and recreation trails.

Officers and firefighters recently fanned out to give notice to homeless people living in the encampments that it was time to clear out for the sake of fire danger.

“Our Neighborhood Policing Unit teamed up with SCFD for fire safety outreach and to vacate encampments in our beautiful Pogonip and wildland spaces. An EMERGENCY ORDER TO CLOSE/VACATE OFF-TRAIL, CITY-OWNED OPEN SPACE AREAS is in effect,” police stated. “SCFD and SCPD staff has been out in the City's off-trail open spaces over the last several weeks providing notification of this upcoming closure.”

"This closure is necessary because of the potential for extreme fire behavior in dry vegetation in off-trail areas such as Pogonip, Delaveaga, and Moore Creek,” Santa Cruz Fire Chief Hajduk said in a statement. “These conditions are coupled with the number of fires that have already occurred in these areas necessitates closures until conditions change."

Santa Cruz recently enforced a no-camping ordinance on its beaches to clear numerous encampments that have taken over the city’s picturesque and popular beaches. Now it is turning its attention to the trails.

Cities throughout Northern California have seen large fires caused by encampments. It is a frequent problem in Oakland, San Francisco, and San Jose. Occupants use an open flame, fed by flammable fuels to cook and stay warm. That poses a significant fire threat when in dry vegetation or in an urban environment with a lot of things to burn.

“Santa Cruz, like the majority of the western United States, is experiencing unprecedented heat and lack of precipitation,” Hajduk said in a letter explaining why he issued the order. “Because of these factors, our wildland open spaces are more prone to significant wildland fire, and there is an urgent need to close off-trail areas of City-owned wildland open spaces. This year, the SCFD has already seen multiple fires associated with off-trail campsites in City-owned wildland open spaces, and we have been fortunate that the fires have not spread. Going into an extremely dry summer season, the City must take further steps to protect itself from dangerous fires and the steep financial costs associated with major fire suppression efforts, which can easily run into the millions.”

The Santa Cruz Mountains frequently see large wildfires, which is why the rush to clear the campsites is so critical as the state moves into peak wildfire season.

“Therefore, to address fire risk and prevent negative impacts to our community, I hereby order that all off-trail areas of City-owned wildland open spaces' are to be promptly closed, and any individuals occupying these areas are directed to vacate,” he added. “City recognized trails and roads may stay open for normal use. This closure is necessary because of the potential for extreme fire behavior in dry vegetation in off-trail areas such as Pogonip, DeLaveaga, and Moore Creek. These conditions coupled with the number of fires that have already occurred in these areas necessitates closure until conditions change.”