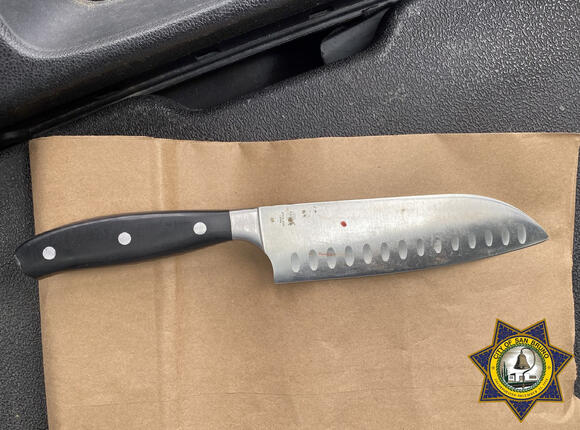 The suspect walked next to the victim and stuck the knife into his lower back, police said.San Bruno Police

A freak knife attack has left one person injured near the San Bruno Caltrain Station, according to police.

A suspect has been arrested in connection with the attack, and officers suspect the person also broke the window of a passing vehicle just moments earlier.

“On Wednesday, July 7, 2021, at 2:42 p.m., San Bruno Police Officers responded to the intersection of West San Bruno Avenue and Huntington Avenue on the report of a subject with a knife, who had just broken the window of a passing vehicle,” San Bruno Police stated. “While officers were enroute to the call, an additional caller reported that the above subject had just stabbed him with a knife and fled on foot. Officers responded to the scene, located the victim, and provided him with emergency medical care until paramedics arrived. During this time, officers also located the fleeing suspect, approximately one-quarter mile from the stabbing scene, and utilized de-escalation techniques to safely take him into custody without incident.”

Officers searched the suspect and discovered the weapon used in the attack.

"The suspect was still in possession of the knife when he was arrested,” police stated. “Further investigation revealed that the suspect, a 26-year-old male from South San Francisco, walked up behind the victim on the sidewalk, and stabbed him in the lower back with a large kitchen knife.”

Thankfully, the victim is expected to make a full recovery. Police did not say whether the victim knew the suspect.

“The victim was transported to a local hospital where he was treated for non-life-threatening injuries,” police stated. “The suspect was arrested for charges related to attempted murder, brandishing a weapon, and vandalism. He was booked into the San Mateo County Jail.”

Police released an image of the knife used in the attack, which resembled a large kitchen cleaver.

“The B- grade means the rate of crime is about the same as the average US city,” CrimeGrade.org stated. “San Bruno is in the 54th percentile for safety, meaning 46% of cities are safer and 54% of cities are more dangerous. This analysis applies to San Bruno's proper boundaries only. See the table on nearby places below for nearby cities. The rate of crime in San Bruno is 24.97 per 1,000 residents during a standard year. People who live in San Bruno generally consider the east part of the city to be the safest. Your chance of being a victim of crime in San Bruno may be as high as 1 in 27 in the north neighborhoods, or as low as 1 in 48 in the east part of the city.”

Police are asking for any witnesses to step forward to help with the investigation into the stabbing.

“Anyone with any information related to this crime is urged to contact the San Bruno Police Department at (650) 616-7100 or by email:sbpdtipline@sanbruno.ca.gov," investigators asked. “Information can be left anonymously.”