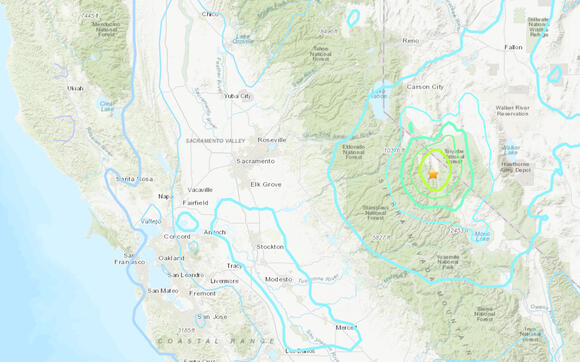 The epicenter was near the Nevada border, but people on the coast felt the shaking too.U.S. Geological Survey

A strong earthquake that shook the eastern part of California was felt all the way from Sacramento to San Francisco. It sent boulders tumbling from mountains and onto narrow two-lane highways below.

Drivers in the area of Interstate 395 in Mono County shared social media videos of big rocks covering the two-lane road. Some of the videos showed big plumes of dust being kicked up in the air after the quake knocked rocks loose from mountains on the east side of the Sierra Nevada range.

“ATTN DRIVERS: Caltrans District 9 is responding to several reports of rockslides on U.S. 395 and SR 89 in northern Mono County following a 4.8 earthquake,” the state department of transportation alerted through Twitter. “Traffic may be temporarily delayed or re-routed as crews work to remove the rocks from the road.”

Caltrans managed to clear the road in about 90 minutes from Bridgeport, Calif. to the Nevada state line.

According to the U.S Geological Survey, the quake struck just before 4 p.m. Thursday, July 8. It measured a magnitude 6.0 with an epicenter in Markleeville, Calif. which is about 40 miles southeast of South Lake Tahoe.

There have been numerous aftershocks, the largest of which has measured a magnitude of 4.4.

“The M5.9 this afternoon is a classic normal faulting earthquake for eastern California,” tweeted Dr. Lucy Jones, a well-known Seismologist at CalTech in Southern California. “As is common in this region, there are a lot of aftershocks - 10 above M3 in the first hour. The focal mechanism shows the fault is NNE-striking. There are many NNE-striking faults in the area. The nearest town in the USGS database is Smith Valley, 20 miles away, so unlikely there is any damage A M~6 quake is usually felt for more than 100 miles so it is not surprising it was felt in the Central Valley.”

State officials said there did not appear to be injuries or fatalities resulting from the tremor. People as far away as Fresno, Santa Cruz, and Redding felt the shaking.

“While there are no preliminary reports of damage or injuries, this is a rapidly evolving situation & more details will emerge in the coming hours,” the California Office of Emergency Services stated. “We are working closely with local officials to ensure they have the resources and support to rapidly respond to these earthquakes.”

They offered this word of caution.