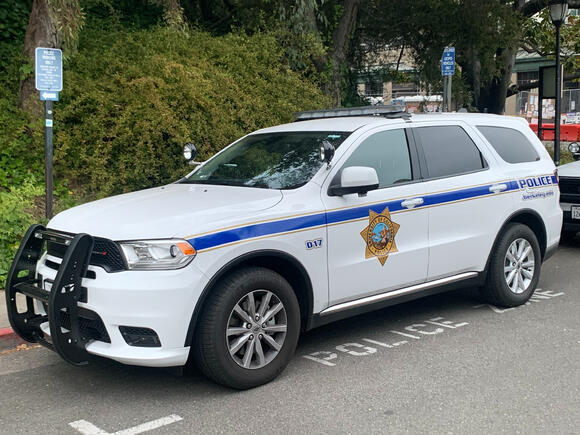 Campus police wanted to support LGBTQ+ community. That incensed a student group that's supposed to be about inclusion.Golden Gate Media

“The month of June commemorates LGBTQ+ Pride Month and the historic Stonewall Riots,” the note from campus police read. “We recognize the hardships and sacrifices experienced in the LGBTQ+ community and stand in solidarity with our LGBTQ+ community members. As a tribute to Pride month, we’ll be wearing our Pride lapel pins during the month of June.”

That touched off a furious response from the board of a UC student group representing “both undergraduate and graduate students of various gender identities and expressions.”

The group's leaders immediately rejected the Police Department’s display of inclusion and acceptance, arguing that the force should be defunded instead.

“We, as board members of UC Berkeley’s Queer Alliance Resource Center, or QARC, adamantly reject this bad-faith signal of false allyship, and we call for an immediate defunding and abolition of all policing institutions that exercise state violence against our community,” read an Op-Ed in the campus newspaper, The Daily Californian. “This Pride Month, QARC emphasizes that the origins of Pride have never been about the neoliberal acceptance of a white, patriarchal, cisgender, heteronormative society. It has never been about introducing hate crime bills in Congress, fighting to have Transgender soldiers in the military or supporting the nonprofit industrial complex. Pride has never been about aligning Queerness and Transness with a violent, neoliberal state agenda that exploits and harms marginalized people.”

The Op-Ed authors alluded to instances of anti-gay violence by police in the past: the Stonewall Riots and the violent 1966 rioting at Gene Compton’s Cafeteria in San Francisco’s Tenderloin District.

“These two instances of radical anti-police movements are cornerstones of Queer and Trans history, defined by resistance against oppression and founded by poor, Black and Brown community members,” the Op-Ed read. “In light of this history, UCPD’s email affirming its ‘allyship’ to Queer staff members and students for Pride Month seems utterly performative, and the message ostensibly showcases the way police departments neoliberalize queer spaces and pinkwash the Transphobic, Queerphobic, anti-Black and anti-poor violence that is fundamental to the existence of police.”

The message went even further — it criticized officers who chose to wore the pride flag pins on their uniforms. The Op-Ed demanded they take the pins off.

“Cops can never be allies to the queer community, and no number of rainbow pins will change that,” the Op-Ed piece read. "Wearing the Pride flag on their uniforms is violent and incredibly hypocritical.”

“Divesting from policing and carceral solutions to safety, supporting mutual aid and community care efforts, implementing transformative accountability practices and bolstering community defense will keep us safe,” the authors continued. “In our eyes, they do not serve the Queer and Trans community, nor do they keep us safe. Instead, it is up to community members to protect and heal each other when one of us is hurt. We recognize that QARC only exists because UC Berkeley fails to institutionally support the needs of its Trans and Queer students and protect us from violence.”

The anti-cop Op-Ed ended with the hashtag, “no pigs at pride.”