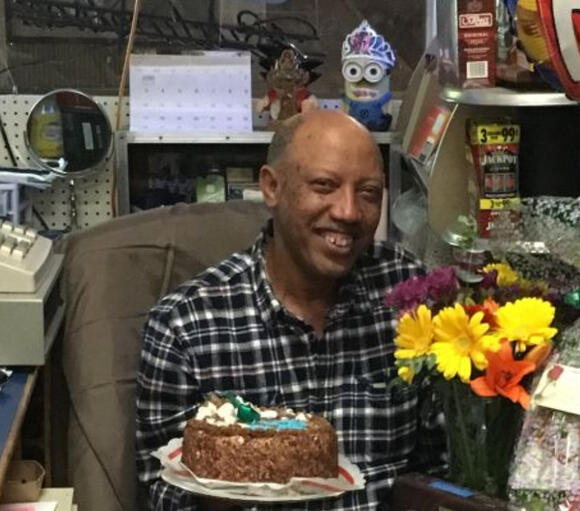 A long-time San Francisco market owner was left partially blinded and fighting for his life in a random attack - just before retirement.GoFundMe Page

He was victimized twice by San Francisco criminals in a matter of hours. First, they went after the store he's owned for a quarter-century. Then they tried taking his life.

A long-time beloved San Francisco grocer -- months away from retirement -- was viciously attacked and left partially blinded by a deranged assailant as he waiting for repairs to be done to his storefront following an attempted overnight break-in.

Petros Yohannes, owner of Franklin Market, at Franklin and Pine Sts. in San Francisco remains in a hospital with serious stab injuries to his face, chest, and arms, according to his daughter.

She detailed the harrowing incident that occurred last week on a GoFundMe page that she hopes will raise enough money to cover his medical bills.

“My parents have been proud small business owners in San Francisco for 25 years,” Katerina Yohannes wrote. “Unfortunately, due to the recent spike of violence and burglaries, they felt defeated and had essentially been living/working in fear. Heartbroken, they agreed to retire in the coming months and begin a new chapter of their lives. Before they were able to do so, there was another major attempted break-in, in which an SUV had driven into our storefront repeatedly at 4 a.m. My father received the call & once again, went in to assess the damages. A little before 10 a.m., while he made arrangements to get the storefront repaired, he was confronted by an aggressive individual. The individual refused to leave the store & began fighting with my dad. During the fight, the individual stabbed my dad multiple times and fled.”

“One of our long-time customers, who just happens to be a doctor, came in shortly after to make a purchase,” Yohannes continued. “He found my dad losing blood quickly and jumped to action. He called 911 while applying pressure to his wounds and helped him maintain consciousness until the paramedics arrived. This terrifying incident caused my dad to lose his left eye & he only regained partial vision within his right eye in addition to the wounds on his chest and arms.”

Yohannes was rushed to a hospital where he currently remains. Police have not announced an arrest in the incident. The troubling attack has outraged regular customers of the market, a fixture in San Francisco for more than 25 years.

Petros Yohannes is beloved by loyal customers. Many expressed outrage at the attack, the latest in a spate of violence targeting seniors, small business owners, and even uniformed police officers.

“My parents immigrated from Eritrea (East Africa) in hopes to provide a better life for my siblings and I,” Yohannes wrote. “They worked 16-18 hours a day, 7 days a week. They gave until they could not give anymore, and this is how they have always been. Consequently, the sweetest and most hardworking man I know was left to rely on our family for assistance with almost everything. His assailant had stripped him of his independence and pride. My dad has one of the biggest hearts of anyone I know. If you had ever stopped in his store guaranteed you left laughing, with a smile, or even a quick history lesson. If you were lucky, you’d get all three.”