Why did a U.S. Navy combat ship sail into San Francisco Bay this week? 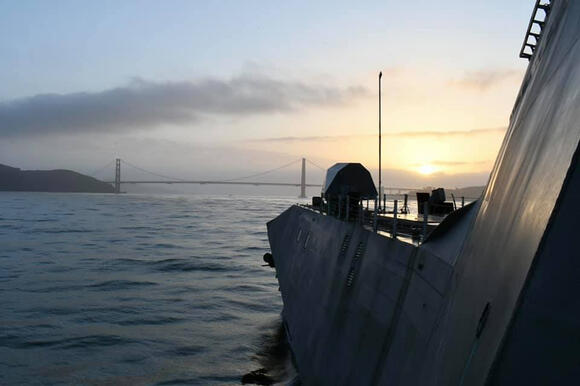 A U.S. Navy combat ship named to honor the City of Oakland sailed under the Golden Gate Bridge early Wednesday morning where she will be christened during a Saturday morning ceremony in the city of her namesake.

It is the third Navy ship to bear Oakland’s name. The commissioning ceremony will be a smaller affair because of the pandemic.

The commissioning will take place at Pier 22 at the Port of Oakland. It will be live-streamed online. You can watch the ceremony here.

According to the U.S.S. Oakland Commissioning Committee, “the first Oakland was commissioned in 1918 and used to transport cargo.”

“In 1943 the second USS Oakland was commissioned,” the committee writes. “Though in service for less than seven years, she was key to many anti-aircraft missions in the Western Pacific—Marshall Islands, Pagan Island, Guam, Iwo Jima, Rota, Peleliu, and Okinawa. After the war, Oakland performed two duty patrols off the coast of China before her decommissioning in 1949.”

All photos in this story are courtesy of the U.S. Navy’s U.S.S. Oakland - LCS24 Facebook page. 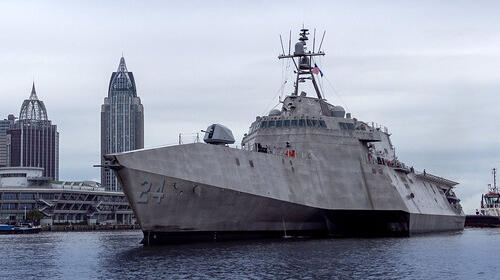 The latest U.S.S. Oakland is the Navy’s 22nd littoral combat ship, which the service abbreviates as LCS. It is the 12th of the Independence-variant to join the Navy’s fleet. The ships are built to be agile, stealthy (thus the ship’s boxy, sleek look), and built for speed so it can carry out operations that are close to shore.

The trimaran measures 471-ft-long and 104-ft-wide and is capable of speeds of 40 knots.

The capabilities of the ship can go against surface-to-surface, mine, and anti-submarine warfare.

“The LCS is capable of supporting forward presence, maritime security, sea control, and deterrence,” according to the Navy.

“This ship will play an essential role in carrying out our nation’s future maritime strategy,” LCS program manager Capt. Mike Taylor said when the Navy took delivery of the ship on June 26, 2020.

“The dedication and skilled work of our industry partners ensure this ship will represent the great city of Oakland and serve our Navy and Marine Corps team for decades to come,” Secretary of the Navy Richard V. Spencer said during the ceremony.

The U.S. Navy has played a pivotal role in Oakland’s history. Most recently, Oakland was home to the Oak Knoll Naval Hospital, which closed in 1993. The Oakland Fleet and Industrial Supply Center was located in the present-day Port of Oakland. That closed by 1996.

Across the estuary, the Alameda Naval Air Station served critical roles for the Navy until its closure in April 1997.

All photos in this story are courtesy of the U.S. Navy’s U.S.S. Oakland - LCS24 Facebook page.