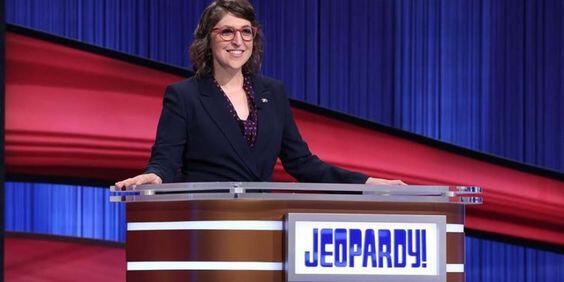 Like Pat Sajak and Vanna White is with Wheel Of Fortune, Alex Trebek was Jeopardy. His professionalism was undeniable to the viewers. He just had a calming presence that had you feel that if you were on Jeopardy, you were in good hands with Trebek at the helm.

After his death was announced, a search had begun to see who would be his replacement in hosting Jeopardy.

For a short minute, it sounded like Levar Burton (Reading Rainbow/Star Trek!) would get the job and then…silence. I wondered what happened after not hearing anything about his progress. Then I found out that he didn’t want the position anymore, which was a bummer, I thought he would have been a great host for that show.

Several other candidates were auditioning for the show including football player Aaron Rodgers who I heard did a great job during his short time hosting the show.

Then I eventually found out that Mayim Bialik was hosting Jeopardy.

I was a little curious about Mayim Bialik — because I learned a couple of years ago when I saw her on a few episodes of The Big Bang Theory that she was the same person who was Blossom on the tv show Blossom! The few memories I had of the show came flooding back to me.

I didn’t see Blossom that much when it was on the air in the 90s, but hearing that theme song, and seeing Mayim’s unforgettable smile while dancing to it, left a strong impression on me as a kid — to where it felt like I had watched the show from the beginning to its end.

Mayim still has that smile to this day just by looking at some of her Google photos on the internet.

So, I figured I watched a Jeopardy Youtube video a couple of days ago with her hosting the show, and she did a GREAT job on that clip. She was very poised, professional, and warm to the three contestants on that episode.

She commanded that show with a quiet strength and grace that I’m sure would make Alex Trebek proud.

I hope she gets the gig for good! It fits her really well.

Her podcast on Youtube is really great also. Her emphasis on mental health is very inspiring and empowering. It makes me wish I had someone who had that kind of concern during my middle school days.

I guess it’s safe to say that I’ve become a Mayim Bialik fan.