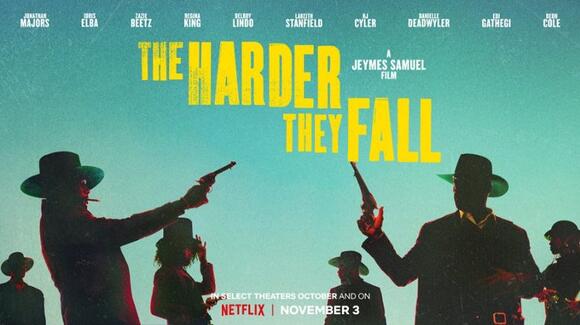 I saw this movie two days ago on Netflix, and the effect it had on me still lingers on.

For a two-hour movie, I had myself glued to my laptop from the beginning scene to the ending.

When I saw the trailer for this film a few days ago, I thought to myself ‘’I gotta see this movie!’’ I haven’t had that feeling since I saw the trailer to the movie Cruella with Emma Stone that made me want to see it (It’s a great movie!).

I love westerns! I grew up on Westerns because my dad was a western fan, so, he would watch them any chance he had. It wouldn't take long for me to like them too.

The cool cowboy hats, the guns, the gun battles, and the outside atmosphere were so intense and so cool at the same time.

Soon, I would find myself practicing with toy guns that my parents got me when we would go to this store called Roses. I remember wanting to be as cool and as respected as the main characters in the movies.

I didn’t see many westerns that came out in the ’00s and 10s, though, there was a really good one named Appaloosa with Ed Harris, Viggo Mortensen, and Renee Zellweger. The Magnificent Seven remake with Denzel Washington and Chris Pratt was really good also.

There are so many great movies in that genre.

Movies like Tombstone (my favorite one), The Good, The Bad & The Ugly, The Magnificent Seven, Winchester 73, Hang Em High, The Outlaw Josey Wales, Hell Or High Water, Warlock, Major Dundee, and yes…The Harder They Fall belongs on that list.

This movie has a great cast with Regina King, Idris Elba, Delroy Lindo, Johnathan Majors, LaKeith Stanfield, Zazie Beetz, RJ Cyler, and other great actors who bring this story to life. I was surprised to see comedian Deon Cole in this, he does a phenomenal job in his role.

The movie begins by showing a nice loving family getting ready to enjoy their dinner — when a stranger knocks on the door — interrupting their dinner time. The movie viewer will learn later through the movie — that this stranger is named Rufus Black (Idris Elba). There’s also a feeling that the family man and Rufus have some history together.

Rufus kills the mom and the dad in front of the frightened boy. You hope that he doesn’t meet the same fate as his parents, After talking to the kid, Rufus decided to cut him on his forehead having him holler in agony before the scene fades to black.

The scene is very sad and makes you angry — wanting Rufus to die immediately.

In a few scenes after that horrible tragedy, we find out that years had passed since it happened and that the boy who witnessed a horrific crime done to his family is still alive and is now a grown adult named Nat Love (Johnathan Majors).

Two other characters will join the group to take down Rufus Black and his gang. a worker for Stagecoach Mary named Cuffee(Danielle Deadwyler) and well-known lawman Bass Reeves (Delroy Lindo).

Meanwhile, Rufus Black has been freed from a cell on a train thanks to his loyal teammates in Trudy Smith (Regina King) and Cherokee Bill (LaKeith Stanfield). Together, they plan to run a town named Redwood with force.

Nat Love and his crew stand in their way to carry out their plans which leads to a final showdown between the two sides.

In a movie full of great scenes. There were a couple that stood out to me.

The one scene where Regina King’s character Trudy forces a conductor to stop a train is priceless. The flustered conductor gets off his train to confront her.

‘’That ain’t no way to board a train you stupid Nig’’ POW! The conductor is shot dead by Trudy.

Then she and Cherokee Bill debate what n-word the conductor was going to say was hilarious.

Another part I really loved was the buildup in the standoff between Jim Beckworth and Cherokee Bill is brilliantly done. It makes you believe that Jim will win the fight when he counts, only, the fight ends in a sad way. Cherokee Bill doesn’t wait for Jim to finish his count, he just kills him after he counts to three.

The entire cast is outstanding in this film. Regina King stays giving great performances in her works, as does Idris Elba and Delroy Lindo. LaKeith Stanfield, I had heard of, but, lately, he’s really gotten me taking notice of his acting talent.

I first became aware of Johnathan Majors in the Spike Lee movie Da 5 Bloods (Delroy Lindo is in that one too) and thought he did a good job in it. Like LaKeith, he had me say ‘’okay, I see you showing me you’re acting talent’’.

This movie also got me wanting to check out the other cast members in their other works.

Even though the story is fictional, the main characters in the movie existed in real life. The only ones I somewhat knew about were Bass Reeves, Cherokee Bill, and Bill Pickett. I had seen their names in a history book a while ago, but, it wasn’t a lot of information on these historic figures.

This movie has me wanting to learn more about them. Credit to director Jeymes Samuel for having the imagination to bring this story to the screen.

The Harder They Fall is a fresh western that is worth seeing.