My writing is popular in academia (biology, psychology, etc.) and on websites such as Quora (millions of views) and Medium. Also, I'm signed to the same literary agency as Eckhart Tolle. In short, my sole mission in life is to serve my brothers and sisters from all walks of life. https://finalspeciescode.com/genius-turner/

Why Rich People Would Rather Give Than Receive

One of the world's oldest marketing secrets

I. Perception is Reality

“Oprah’s greatest strength has always been her ability to help us,” President Obama said, mere moments before pinning the prestigious medal on Oprah.

According to Law 40 of the 48 Laws of Power — to give a gift to another is to place the recipient under obligation.

Say thank you! our parents scolded us in youth, so as to impress upon our youthful psyches this sense of obligation. Pause for reflection, if you will, and truly ponder what’s being suggested here.

To grasp the above insight is to know why historically the kings and queens of the world have delighted in bestowing gifts but were said to occasionally take offense when offered a gift. Aha! No wonder Oprah’s nickname is the Queen of All Media.

“The beginning of wisdom," said Socrates, "is the definition of terms.”

Armed with the Socratic method, it becomes apparent why the word rich essentially means "to have more than you need."

Because there’s no reality, only perception, your perception must be your reality. For this reason, the giver is always perceived as richer than the recipient. Think about it. ...

The homeless fella who begs for change on the subway, though his true reason for asking for change stems from hopes of securing a change of his misery, unknowingly violates one of the world’s oldest marketing secrets.

So ancient is this old yet paradoxical insight into marketing that thousands of years ago the Nazarene advised his disciples:

“For whoever has will be given more, and they will have an abundance. Whoever does not have, even what they have will be taken from them.”

II. All the World Loves a Cheerful 'Giver' 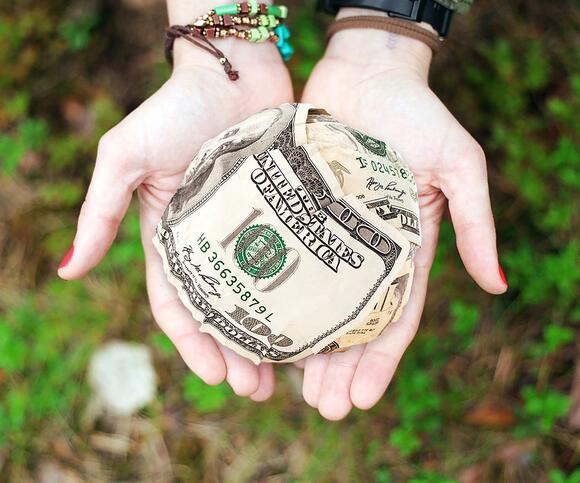 “It’s the weirdest thing, but as soon as you make it big and are pulling down the kind of salary where you never have to worry about money again, brands and other rich celebs can’t give you free stuff often enough.” — Amber Garrett

“What’s up with rich celebs getting expensive free gifts they can easily afford?” reads the headline of Garrett’s article.

The answer to Garrett’s riddle lies in knowing that human nature can no more change than leopards change their spots. For this reason, history repeats itself. And to those of us who listen closely, history can be overheard mumbling: people smile at the sunrise yet frown at the sunset.

Again, the perception of being rich or having more than enough is reality. And nothing heightens this perception more than giving; nothing diminishes it more than receiving. Perhaps this explains why Jay-Z once rapped, “Do me a favor — don’t do me no favors!”

By giving, noted Greene in the 48 Laws of Power, you essentially enhance your reputation. After all, everyone loves a generous person. And because reputation is the cornerstone of power, there is no greater marketing power to be found than that of being perceived as a giver.

The boxer Floyd Mayweather Jr. famously gifted his pal a $200,000 Bentley for his birthday. When Thomas was asked what he bought Mayweather in return, he chuckled. And then noted, “C’mon, you know — Floyd gets mad if you try to buy him something.”

Perhaps Mayweather intuitively grasps why Aristotle once said the man armed with the upper hand “is of a disposition to do men service, though he is ashamed to have a service done to him. To confer a kindness is a mark of superiority; to receive one is a mark of subordination.”

“It is one of the beautiful compensations in this life that no one can sincerely try to help another without helping himself.”

Emerson called the above principle “The Law of Compensation.”

When Mark Zuckerberg’s friends and family pestered him to slap a price tag on his fledgling Facebook company, Zuckerberg — armed with an intuitive grasp of the Law of Compensation — replied by refusing to charge a single penny.

Notice he used the word giving.

When Oprah stepped down from her talk show, Ellen DeGeneres abruptly seized the throne as the new Queen of Daytime TV. Though the name for your highness changed, the use of the oldest marketing principle remained the same.

From her famed 12 Days of Giveaways to gifting a family $1 million on her talk show, Ellen never once strays from the Law of Compensation, which is but shorthand for — rich people would rather give than receive.

Armed with the Socratic method, it becomes apparent to compensate means to repay… or give back.

No wonder the greatest investor in modern history — Warren Buffett — thought it wise to use the Law of Compensation to invest… pardon… to donate $37,000,000,000 to charity. After all, is not the very definition of money the medium of exchange or compensation?

Perhaps the above insight explains why the incredible headline of an article in the business section of TIME reads — Famous People Get $100K Worth of Free Stuff Annually.

In short, the reason it has long been said the rich get richer is that most rich people — whether knowingly or intuitively — primarily operate from one of the oldest principles of marketing:

"It is better to give than to receive.”

My writing is popular in academia (biology, psychology, etc.) and on websites such as Quora (millions of views) and Medium. Also, I'm signed to the same literary agency as Eckhart Tolle. In short, my sole mission in life is to serve my brothers and sisters from all walks of life. https://finalspeciescode.com/genius-turner/

HOUSTON, Texas — On Halloween night, Sampson and Benjamin texted me a picture. The face was familiar. “Rest in peace,” read the Facebook caption that memorialized a death-day.

With some of the most expensive rent in the world, Manhattan gives new meaning to "you get what you pay for."(Nicolás Boullosa/Flickr) Dorm-sized apartments once again show why NYC is nation's most expensive city.

How a Former Houston Rocket is Giving Back to His Hometown

For over half a century, Nannie Mae Turner has served Third Ward's community.(The author/screenshot) Houston proudly celebrates a true pillar of its historic district. Houston, TX — "Family does not necessarily mean blood relatives," said Queen Elizabeth II, "but often a description of a community, organization or nation." Indeed, from the Queen of England to 3rd Ward's Queen — spreading love reflects a royal touch.

After losing on Friday, Serena Williams gave a winning farewell.(Boss Tweed/Flickr) Before exiting stage left for the final time, Serena gave the crowd one last hurrah. New York City — "Are You Not Entertained?" Maximus asked the sold-out Roman Colosseum.

Bill Gates, the biggest philanthropist of all time, recently announced his plans to share most of his wealth.(Sebastian Vital/Flickr) Gates recently tweeted he plans to donate most of his 'wealth to the foundation'

The City That Never Sleeps appears to have a population that's "waking" back up.(Source: educalingo) New York City — "Don't call it a comeback!" L.L. Cool J once roared. Indeed, with more people moving back to the Big Apple than before COVID struck, perhaps the New York native's old lyric serves as the city's new mantra.

For decades residents and visitors have complained about lack of public restrooms in NYC.(Adam Fagen/Flickr) TikTok may offer a new solution to an old, New York problem. New York City — I once heard someone joke that "a good Relief Map shows where the restrooms are." A TikToker named Teddy Siegel proves once again why there's truth in jest.

Why Natural 'Smart Pills' are Growing in Popularity

Since the dawn of civilization, humans have searched for ways to improve the brain.(Vic_B/pixabay) The booming brain-health-supplements industry reflects a shift toward alternative medicine.

Why Piano Bars are the Hottest NYC Clubs of the Moment

Dizzy Gillespie performing in NYC, in 1947, during the heyday of piano bars.William Gottlieb/Public Domain Media. The resurgence of piano bars briefly returns NYC to the ‘Golden Age of Nightlife’

Given the recent shift, some wonder if offices have become a thing of the past.(Jeffrey Zeldman/Flickr) With so few Manhattan workers returning, remote work appears to be here to stay.

Jean-Michel Basquiat has become synonymous with "cool."Scrubhiker (USCdyer)/Flickr. Basquiat's sisters showcase over 200 rarely shown pieces from the family's archives. New York City — Hip-hop started in New York City. Jay-Z, a native New Yorker, is widely considered the greatest rapper ever. And so, when Jay-Z — the "King of NY" — raps, "[I'm] inspired by Basquiat," and then grows dreadlocks styled like Basquiat ... ahem, what's understood need not be explained.

Due to limited space, NYC struggles to reduce garbage piles on city streets.(Jim Pennucci/Flickr) Mayor Adams & the Sanitation Commissioner hope NYC's waste bins are a step in the right direction.

Why Uber Teaming up with Taxicabs Benefits New York City

For decades, taxicabs served as the staple of transportation in NYC.(Rawpixel/Public Domain) New Yorkers ordering Ubers will also be able to choose taxicabs. New York City — As NYC mourns the loss of DJ Kay Slay, it's only right hip-hop's most iconic battle sets the stage.

Mayor Adams reminds high-school students why nothing is impossible. After all, the word itself says 'I'm possible'!(Picryl/Public Domain Search Engine) Some feel slighted over Mayor Adams changing the mandate for athletes.

How a Houston Artist Turned Trash Paper into Masterpieces

Aaron Lundy-Bey's artwork has become legendary in Houston.By the author. A local artist shows why 'one man's trash is another man's treasure'. Houston, TX — Recently, upon visiting my hometown, I stopped by Aaron's Beauty Salon. Brother Aaron greeted me with a hug and a smile. But before we could play catch up, I asked the million-dollar question: "Where's your latest masterpiece?"