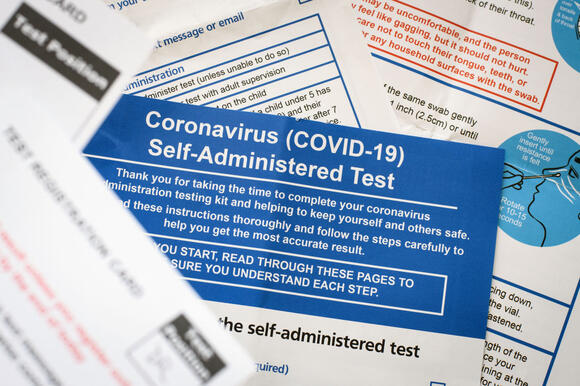 (ATLANTA, Ga.) During the Tuesday meeting, the Cobb County Board of Commissioners (BOC) voted to purchase and distribute COVID rapid test kits.

The opposing commissioner of District 1, Keli Gambrill said, "I continue to voice for opposition to the funding.”

“And while I understand it’s coming from undesignated contingency, and just last night, county government at 6:03 p.m. sent out an email stating that this is going to be using the remaining CARES funding,” she continued.

Gambrill also voiced that the approval of test kits violated the agreement the county made when they accepted the CARES funds.

It was noted during the meetings, District 2 Commissioner Jerica Richardson asked county Finance Director Bill Volckmann if using the funds for the test kits was an appropriate use.

Volckmann answered yes and continued “So to add that, at the end of December, we closed out our CARES grant.”

He informed the board that the money was used to reimburse public safety salaries as eligible under the CARES Act.

“And in doing so we freed up general fund dollars that would have been otherwise used to fund public safety salaries,” he said. “We moved those to a contingency account to address ongoing pandemic expenses that were going to happen beyond the December 31 cutoff.”

Volckmann further specified that there was no restriction for using funds for pandemic-related express, which led to officials setting aside money for at-home test kits.

The motion to approve passed 4-1.

(ATLANTA, GA.) Individuals and organizations are gearing up to celebrate MLK Day this year with a variety of in-person and virtual events. King, an Atlanta native, was an influential civil rights leader best known for his work on racial equality and ending racial segregation in the United States. Many individuals and organizations worldwide celebrate his life and achievements with acts of service, community involvement and more.

(Image courtesy of the City of Kennesaw) (ATLANTA, Ga.) The city of Kennesaw and the Kennesaw Parks and Recreation Department will hold an open house for the new recreation center in the coming weeks.

(ATLANTA, Ga.) Atlanta Public Schools (APS) is doing its part in preventing human trafficking and is encouraging residents, students, staff and parents to do the same. National Human Trafficking Awareness Day is recognized each year on January 11 and throughout the month, Blue Campaign hosts a variety of special events and educational activities to raise awareness.

(ATLANTA, Ga.) While navigating the recent omicron variant of COVID-19, Atlanta Public Schools (APS) made the decision to return to virtual learning from Jan. 3 through Jan. 7.

Hundreds of Atlanta residents to receive $500 monthly through pilot program

(ATLANTA, Ga.) Up to three hundred Atlanta residents will receive $500 per month for a year as part of a basic guaranteed income program. The Income Mobility Program for Atlanta Community Transformation (IMPACT) is a partnership between the city and the Urban League of Greater Atlanta. The initiative was announced during former Mayor Keisha Lance-Bottoms’ candidacy.

(ATLANTA, Ga.) The Atlanta Community Food Bank (ACFB) is hiring for full-time positions at their office in the East Point area. Positions range from volunteer coordinator to project manager and include competitive wages, flexible schedules and great benefits.

Andre Dickens officially sworn in as 61st mayor of Atlanta

(ATLANTA, Ga.) Andre Dickens has been officially sworn in as the 61st Mayor of Atlanta on Monday afternoon. Many were in attendance at Dicken's alma mater, the Georgia Institute of Technology, to view the ceremony and officially welcome Dickens into office despite frigid temperatures and cold winds.

(ATLANTA, Ga.) It’s a running joke for some that live Christmas trees stay in households until the summertime. However, this year Cobb County and corporate partners are working to recycle Christmas trees this holiday season.

Atlanta opening a warming center ahead of severe winter temperatures

(ATLANTA, Ga.) In response to the frigid winter temperatures ahead, the city of Atlanta is opening an emergency warming center for those in need. The warming center will open tonight Wednesday, Dec. 22 at 8 p.m. There are no requirements nor sign-up needed to be admitted into the center. The venue is especially for those experiencing homelessness and without shelter throughout the night in freezing temperatures.

(ATLANTA, Ga.) With the recent surge in COVID-19 cases and the impact of the Omicron variant of the virus, Atlanta Mayor Keisha Lance Bottoms has decided to issue an executive order to reinstate the citywide indoor mask mandate.

(ATLANTA, Ga.) During a remote special meeting on Monday, the Atlanta City Council authorized an agreement for community benefit funds. The funds and legislation were approved for mayor Keisha Lance-Bottoms’ One Atlanta initiative. The initiative and funds used would continue over a five-year period with an option to renew for an additional five years.

(ATLANTA, Ga.) In a recent 4-1 vote, the Cobb County Board of Commissioners approved a proposal to make and recognize Juneteenth as a county holiday. Juneteenth is celebrated yearly to recognize the Emancipation Proclamation that formally ended slavery in the United States. Until now, the day was casually celebrated and honored with a day off work by certain establishments.

(ATLANTA, Ga.) In the spirit of the holidays and giving back, Atlanta city leaders are going into communities to provide for families and individuals in need. On Thursday, District 10 Councilmember Andrea Boone will be spreading holiday cheer for five local families. Boone is taking the families on a holiday shopping outing at the Walmart located on Howell Mill Road at 6 p.m.

(ATLANTA, Ga.) Over 200 county officials across the country gathered in DeKalb County for the National Association of Counties (NACo) Large Urban County Caucus (LUCC) and NACo Board meetings.

(ATLANTA, Ga.) After a weekend of celebrations after winning the World Series, the Atlanta Braves organization met with Cobb County officials to discuss the aftermath of the event logistics.

(ATLANTA, Ga.) In an effort to decrease crime and vehicular crashes in high traffic areas, Mayor Keisha Lance-Bottoms created an initiative, “One Atlanta—Light Up the Night.”