Andre Dickens officially sworn in as 61st mayor of Atlanta 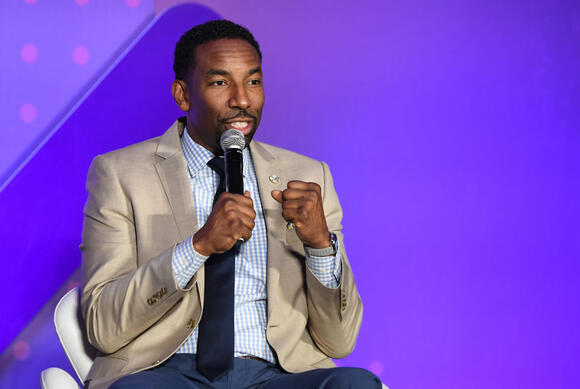 (ATLANTA, Ga.) Andre Dickens has been officially sworn in as the 61st Mayor of Atlanta on Monday afternoon.

Many were in attendance at Dicken's alma mater, the Georgia Institute of Technology, to view the ceremony and officially welcome Dickens into office despite frigid temperatures and cold winds.

Dickens addressed his plans as mayor, including tackling the issue of the lack of affordable housing throughout the city as well as the increase in crime throughout the metro Atlanta area. Both are prominent issues and concerns of residents across Atlanta.

“Now, our opponents are poverty, fear, inequality, violence, hopelessness, and homelessness,” Dickens said. “Each mayor had their burden in mind to bring us together to form a safe, clean, thriving city and to restore our sense of community.”

Dickens also discussed the Buckhead City secession movement which will become the topic du jour as the state house’s legislative session begins next week. During his speech, Dickens, also an ordained deacon, used the Book of Nehemiah as a backdrop to describe his frustrations with building the wall around Jerusalem. He spoke on the story about people being worried about crumbling infrastructure, but in 52 days, the wall was built.

“They chose to work together to accomplish a difficult task. They chose to unify and not to divide,” Dickens said. “And we need to choose to do the same.”

Dickens spoke on the focus of his administration which will prioritize Safety and Justice. He also spoke on his Safe Streets Atlanta plan, which promises to hire 250 police officers in 2022. Additionally, Dickens promised he’d train officers in conflict resolution, de-escalation tactics and community policing beginning in the first quarter of 2022.

“First of all, as your mayor and with their help, I want to make sure that our city is safe,” Dickens said.

“From Bankhead to Buckhead. I want to see our city be a place where little kids can play outside without being afraid of getting shot by a random bullet; where women can stop at a gas station and pump a few gallons of gas without fear of physical intimidation and where an elderly can feel empowered to come outside of their homes and can enjoy a walk in the park on a sunny day.”

Before becoming mayor, Dickens served as an at-large City Council member for two terms. As the Post 3 At-Large Councilmember, he was a vocal legislative leader on public safety, transportation, affordable housing and workforce development.

He served as the chairman of the Transportation Committee, providing oversight to city streets, bridges, sidewalks, paths and Hartsfield-Jackson Atlanta International Airport, the world’s busiest airport.

In 2017, he chaired the Public Safety and Legal Administration Committee, during which time homicides went down 33% and all violent crimes decreased 12%.

Many are optimistic about Dickens’ plans to move the city forward and create solutions to looming issues due to his passionate leadership throughout the city.

(ATLANTA, Ga.) Atlanta is known most for its plethora of wing franchises and flavors. However, there’s a new set of establishments on the rise in the city. Many restaurants are becoming more aesthetically friendly and creating environments and menus that make for great Instagram pictures and TikTok videos. The ambiance of most establishments these days is enough to have individuals booking reservations and walking through the doors to see what the hype is about.

(ATLANTA, GA.) Individuals and organizations are gearing up to celebrate MLK Day this year with a variety of in-person and virtual events. King, an Atlanta native, was an influential civil rights leader best known for his work on racial equality and ending racial segregation in the United States. Many individuals and organizations worldwide celebrate his life and achievements with acts of service, community involvement and more.

(Image courtesy of the City of Kennesaw) (ATLANTA, Ga.) The city of Kennesaw and the Kennesaw Parks and Recreation Department will hold an open house for the new recreation center in the coming weeks.

(ATLANTA, Ga.) Atlanta Public Schools (APS) is doing its part in preventing human trafficking and is encouraging residents, students, staff and parents to do the same. National Human Trafficking Awareness Day is recognized each year on January 11 and throughout the month, Blue Campaign hosts a variety of special events and educational activities to raise awareness.

(ATLANTA, Ga.) While navigating the recent omicron variant of COVID-19, Atlanta Public Schools (APS) made the decision to return to virtual learning from Jan. 3 through Jan. 7.

Hundreds of Atlanta residents to receive $500 monthly through pilot program

(ATLANTA, Ga.) Up to three hundred Atlanta residents will receive $500 per month for a year as part of a basic guaranteed income program. The Income Mobility Program for Atlanta Community Transformation (IMPACT) is a partnership between the city and the Urban League of Greater Atlanta. The initiative was announced during former Mayor Keisha Lance-Bottoms’ candidacy.

(ATLANTA, Ga.) The Atlanta Community Food Bank (ACFB) is hiring for full-time positions at their office in the East Point area. Positions range from volunteer coordinator to project manager and include competitive wages, flexible schedules and great benefits.

(ATLANTA, Ga.) It’s a running joke for some that live Christmas trees stay in households until the summertime. However, this year Cobb County and corporate partners are working to recycle Christmas trees this holiday season.

Atlanta opening a warming center ahead of severe winter temperatures

(ATLANTA, Ga.) In response to the frigid winter temperatures ahead, the city of Atlanta is opening an emergency warming center for those in need. The warming center will open tonight Wednesday, Dec. 22 at 8 p.m. There are no requirements nor sign-up needed to be admitted into the center. The venue is especially for those experiencing homelessness and without shelter throughout the night in freezing temperatures.

(ATLANTA, Ga.) With the recent surge in COVID-19 cases and the impact of the Omicron variant of the virus, Atlanta Mayor Keisha Lance Bottoms has decided to issue an executive order to reinstate the citywide indoor mask mandate.

(ATLANTA, Ga.) During a remote special meeting on Monday, the Atlanta City Council authorized an agreement for community benefit funds. The funds and legislation were approved for mayor Keisha Lance-Bottoms’ One Atlanta initiative. The initiative and funds used would continue over a five-year period with an option to renew for an additional five years.

(ATLANTA, Ga.) In a recent 4-1 vote, the Cobb County Board of Commissioners approved a proposal to make and recognize Juneteenth as a county holiday. Juneteenth is celebrated yearly to recognize the Emancipation Proclamation that formally ended slavery in the United States. Until now, the day was casually celebrated and honored with a day off work by certain establishments.

(ATLANTA, Ga.) In the spirit of the holidays and giving back, Atlanta city leaders are going into communities to provide for families and individuals in need. On Thursday, District 10 Councilmember Andrea Boone will be spreading holiday cheer for five local families. Boone is taking the families on a holiday shopping outing at the Walmart located on Howell Mill Road at 6 p.m.

(ATLANTA, Ga.) Over 200 county officials across the country gathered in DeKalb County for the National Association of Counties (NACo) Large Urban County Caucus (LUCC) and NACo Board meetings.