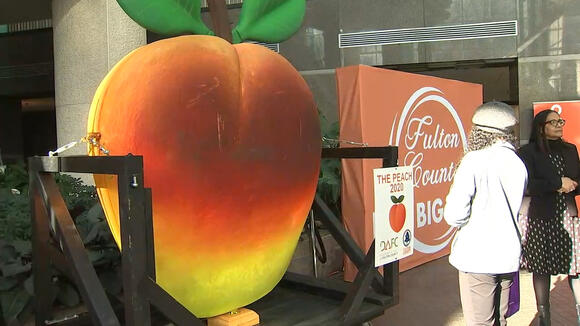 Officials cited a rise in COVID-19 cases due to the omicron variant. It's the third consecutive year the event has been canceled.

"Due to the rising number of Covid cases, the City is canceling the Peach Drop at Underground. While we are saddened to miss this year's party and musical acts, we are very excited to bring the Peach Drop back next year better than ever."

The Peach Drop has been an Atlanta tradition since 1989 — 2019 was the first cancellation in 30 years. Each year, tens of thousands of people gather around in the Underground area to watch a huge peach slowly drop at the stroke of midnight.

Ashanti and Goodie Mob were scheduled to perform as headliners for the event this year.

Mayor Keisha Lance Bottoms provided a public statement on the cancellation of the event saying, "In consultation with public health officials, we have made the very difficult decision to cancel the Peach Drop. As positive COVID-19 cases rise, I encourage everyone to be safe, get vaccinated and follow CDC guidelines."

Event organizers were hopeful the signature New Year's event would return to bring in 2022.

Atlanta isn't alone. Other cities across the country and around the world have canceled or scaled back New Year's Eve events.

Many residents are sad to miss out on another year of the city’s tradition but are hopeful for its return next year.