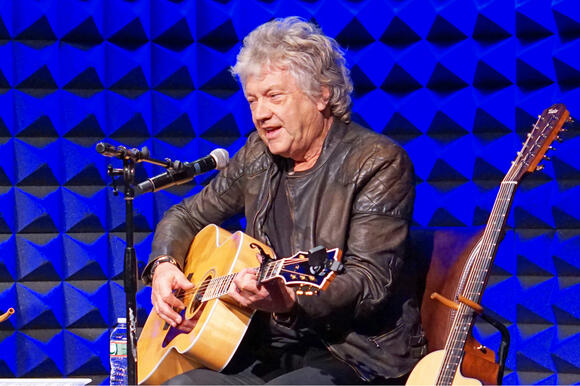 The Steve Miller Band and the Moody Blues played some of their earliest major gigs at New York’s Fillmore East. In this book excerpt from Fillmore East: The Venue That Changed Rock Music Forever, guitarist Steve Miller and Moody Blues bassist John Lodge recall some of the insanity that accompanied their most memorable shows at promoter Bill Graham’s East Village concert hall.

John Lodge: Fillmore East. Those were our first real gigs in America, that was in 1968. Very first gigs.

I remember everything about it. We got there, got on stage, and we were using a Mellotron at the time. The Mellotron runs on a series of tapes, eight-second loops. We were three songs into our set and we suddenly realized the tapes were coming out of the back like spaghetti.

Mike Pinder, who was our keyboard player and knows all about it, was trying desperately to repair it and no way. So we actually played second fiddle to Road Runner cartoons and Joshua’s Lights. Then we went back on stage and we just did it with the three of us without Mike on stage. I think he just played tambourine and we did the rest of the show like that.

Steve Miller: What was going to be my first time headlining at the Fillmore East was real important to me. It was a big deal. So I get to New York, I’m very excited. I’ve worked my way up. I did the show with Miles Davis, I did the show with Neil Young. And now I’m finally getting to headline my show with Mungo Jerry.

These are the guys who’ve got “In the Summertime,” that little tune, you know? That hit single? And I get to town and I go by the Fillmore East and the billboard says “Miller Mungo.”

And I liked Mungo Jerry, I thought they were kind of funny. I liked the tune, but I was very upset, right? And we go and play the gig and as soon as they finish their set, they throw out about 500 kazoos into the crowd and leave the stage. So you could imagine coming out with 500 people with kazoos.

Mastropolo is the author of Fillmore East: The Venue That Changed Rock Music Forever and New York Groove: An Inside Look at the Stars, Shows, and Songs That Make NYC Rock.