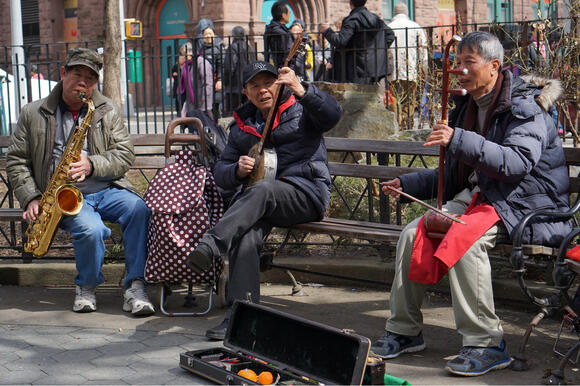 Watching people enjoy making music and playing mah-jongg in Dr. Sun Yat-Sen Plaza in Chinatown’s Columbus Park, it’s hard to imagine the site was a dangerous, decrepit slum in the late 1800’s. Photojournalist and social reformer Jacob A. Riis dedicated a chapter in his 1890 book How the Other Half Lives to the squalid conditions in the area then known as Mulberry Bend.

Riis documented the brutal life of immigrants in the shanties of the Bend, named for the southeastern turn taken by its eastern border, Mulberry Street. In Riis’ day, Italian immigrants had displaced the Irish who arrived in the Bend in the 1840’s, part of the crime-ridden Five Points section. Riis described the Bend as “the foul core of New York’s slums… a vast human pig-sty.”

Riis traveled with the protection of the police to photograph the squalor of Mulberry Bend. One of the most notorious spots was Bandit’s Roost, a tangle of wooden shanties and alleyways. Riis called Bandit’s Roost “the vilest and worst to be found anywhere.” Riis identified a tenement in his photo of Bandit’s Roost as 59 ½ Mulberry Street, the area of Columbus Park where people now sit on benches and warm themselves in the sun.

Riis was determined to have the wooden shanties of the Bend torn down. Shopkeepers sold their products outside along the alleys in unsanitary conditions. Riis wrote, “Big, awkward sausages, anything but appetizing, hang in the grocer’s doorway, knocking against the customer’s head as if to remind him that they are there waiting to be bought. What they are I never had the courage to ask.

“Along the curb women sit in rows… haggling over baskets of frowsy weeds, some sort of salad probably, stale tomatoes, and oranges not above suspicion.”

The tenements of the Bend were razed in 1895 and two years later Mulberry Bend Park was dedicated. Designed by Calvert Vaux, co-architect of Central Park, the park had large grassy areas and brought much-needed sunlight to the neighborhood.

Vaux created the Pavilion, an open-air building designed to remind Italians of their homeland. Free band concerts were held at the Pavilion Tuesday evenings. “Before nine o’clock all the walks were crowded with tired mothers and babies, who were willing to stand in order to hear the band play,” reported the New York Times in 1897.

In 1911, the park was renamed Columbus Park after the explorer, a reflection of the Italian influence in the neighborhood. The grassy areas, which had been off limits to people, were paved over to create a children’s playground.

Columbus Day 1934 marked another renovation of the park. At a rally attended by 15,000 people, the park reopened with an expanded playground and a new recreation center.

By the mid-20th century, Chinatown expanded its boundaries to encompass the park, which stood on its southwestern end. The park became the hub of the Chinese community, a place where labor rallies and music festivals were held.

By the mid-1980s, the Pavilion had begun to deteriorate and was closed. The building had become a roost for pigeons and a place for the homeless to sleep. A complete renovation of the Pavilion was unveiled in 2007.

Today fortune-telling ladies, crouched on low stools, gather at the park’s entrance. Tables are crowded with women playing cards. Men prefer Xiangqi, or Chinese chess. Kids play soccer and swing from monkey bars in the playground on the park’s south side. Free concerts are still held but instead of the brass bands of Riis’ day, musicians play traditional instruments and perform Chinese opera.

In 2011 a statue of Dr. Sun Yat-Sen, the first president of the Republic of China, was erected in the park. Dr. Sen was a resident of Chinatown in the early 1900s. In 2019 the northern plaza of the park was renamed in Dr. Sun’s honor.

Inscribed on the statue’s pedestal is the Confucian motto “All Under Heaven Are Equal” rendered in English and in Dr. Sen’s calligraphy.