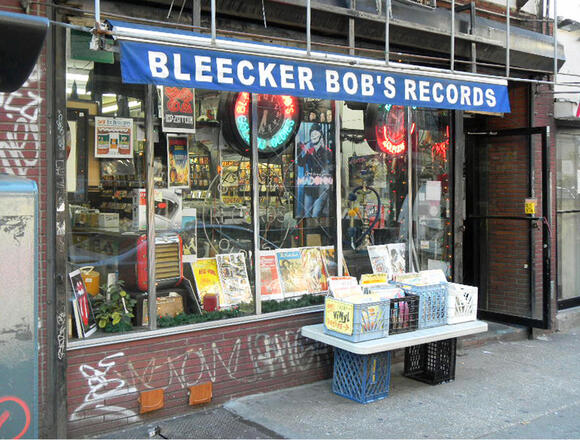 In this excerpt from the new book New York Groove: An Inside Look at the Stars, Shows, and Songs That Make NYC Rock, we look back at Bleecker Bob’s, the iconic Greenwich Village record shop.

Fellow record collectors Al Trommers and Robert Plotnik opened Village Oldies in 1967 at 149 Bleecker Street in Greenwich Village. It was at the record shop that Trommers, known as Broadway Al, gave Plotnik the nickname Bleecker Bob.

The partners moved to MacDougal Street in the 1970s. By 1981, Trommers left the business and Plotnik moved to the former Night Owl Café site at 118 West Third Street, where the shop was renamed Bleecker Bob’s Records. The shop, and Bob’s tough-guy persona, were immortalized in 1993 on television’s Seinfeld in the episode “The Old Man.”

Clip from Seinfeld "The Old Man"

Plotnik recognized new trends in music and it was the source of hard-to-find punk rock releases in the genre’s early days. Thousands of albums and singles were stacked in countertop compartments and posters and memorabilia covered the walls. David Bowie, Keith Richards, the Ramones, Frank Zappa, Lou Reed, and Cyndi Lauper often perused the racks of vinyl. Patti Smith met guitarist Lenny Kaye there when he worked at the shop.

“Bob’s was more than a record store,” Kaye told the New York Times. “It was an important gathering place to introduce and hear the new and progressive as well as honoring the past, how music lives on to influence and discover its new forms.”

“Bleecker Bob’s record store was the first store I ever saw that was the model for the little indie record shops that are now everywhere,” Blondie guitarist Chris Stein recalled in Spin. “It was very funky, and Bob was a very specific odd character. There’s definitely a movie in there somewhere.”

Plotnik suffered a debilitating brain aneurysm in 2001. Employees kept the store running until 2013 when it closed due to a rent hike. Plotnik, 75, died in 2018.