The Night Paul McCartney Donned a Disguise at Fillmore East 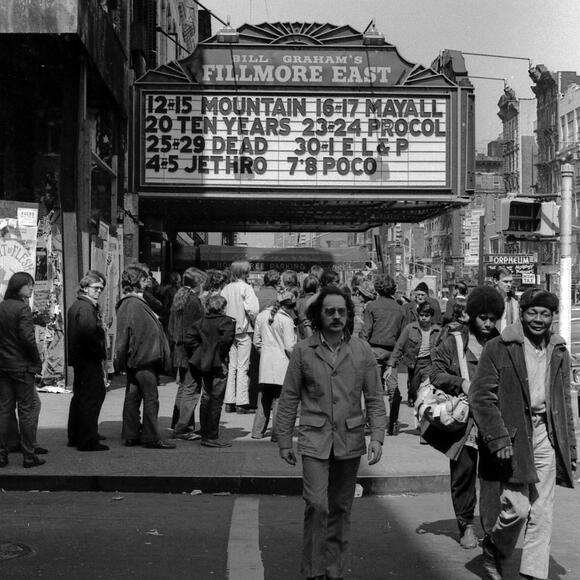 In this excerpt from the book Fillmore East: The Venue That Changed Rock Music Forever, two people who worked at promoter Bill Graham’s historic concert hall describe for the first time the night Paul McCartney — in disguise — and future wife Linda Eastman attended a show.

Marc Rubenstein is the founder of Pig Light Show, one of the pioneering groups of technicians that created the lighting effects at Fillmore East. Kip Cohen became Managing Director of Fillmore East in 1968.

Marc Rubenstein: I was never really impressed. I was young and I was working. I met all of these people but they were the people I was working with. The only people that I remember being really impressed having met was Paul McCartney and John Lennon. And I met them on the same night. They came to see the Mothers of Invention when they were recording the album Fillmore East.

Paul came to the early show. He came in at about six o’clock. There was a little office at the back of the house that Bill used rather than the upstairs office whenever he was in town. It was usually Kip Cohen’s office. I saw him come in the front door and they hustled him in.

I went in just to see what was going on and they had a wheelchair and they put a hat on him and a beard. When the show started, they wheeled him out to the back of the orchestra so that nobody really knew who he was and between acts, they’d roll him back into the office.

Kip Cohen: Paul would come with Linda, who wasn’t well known, and they bought tickets to sit in the back of the orchestra. We would take a couple of the ushers who were on to it and we would bring them food and drinks and they would visit three or four times. They were very sweet about it.

Marc Rubenstein: I’d stand right by him at the back of the orchestra because just being with Paul, man, was so cool! And they did this for all of the acts of the show. He never went backstage, so other than the people who saw him in and around the office, nobody saw him.

Kip Cohen: Before the place closed, they sent me a lovely note that just said, “Thanks for all your hospitality, Paul and Linda.”

After Fillmore East closed in 1971, Marc Rubenstein and Pig Light Show were asked to be the house light show at the upcoming Capitol Theatre in Passaic, New Jersey. Rubenstein continues to teach lighting in colleges and stage light shows for concerts and television.

Kip Cohen went on to work as a disc jockey at WNEW-FM in New York and later as Vice President of Artists & Repertoire for Columbia Records and A&M Records. Today he pursues a variety of philanthropic causes in Los Angeles.

Mastropolo is the author of Fillmore East: The Venue That Changed Rock Music Forever and New York Groove: An Inside Look at the Stars, Shows, and Songs That Make NYC Rock.