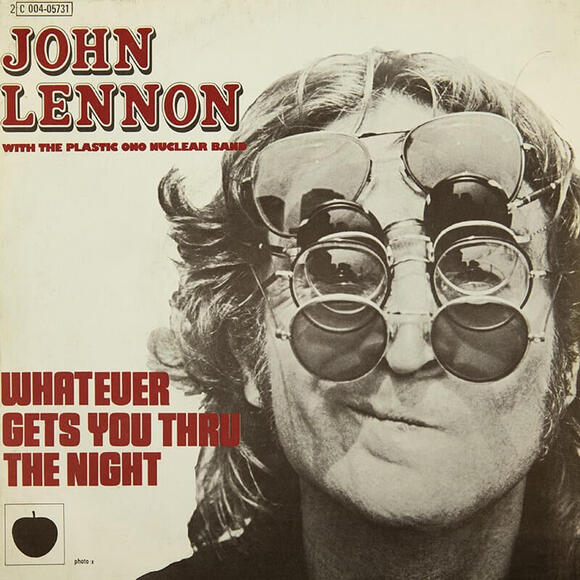 New York Groove: An Inside Look at the Stars, Shows, and Songs That Make NYC Rock Book Excerpt

When John Lennon carried a black Fender Telecaster to the Madison Square Garden stage to join Elton John on Thanksgiving Day, Nov. 28, 1974, his last full-length performance had been 1972’s One to One concert. Lennon only appeared because he had lost a bet to John two months earlier. It would be Lennon’s last performance before he was murdered six years later.

By 1974, Lennon was the only former Beatle who had not scored a number one single as a solo artist. When Elton John contributed vocal harmonies and piano to the recording of Lennon’s “Whatever Gets You Thru the Night,” he wagered the skeptical Lennon that the song would top the charts. “I was at the studio at the time,” guitarist Davey Johnstone told the New York Post, “and Elton said, ‘Well, I’ll play on it, but if it gets to number one, you have to come on stage with us at Madison Square Garden.’ And John went, ‘Yeah, OK’ because he never expected it to be a number one hit, which it was. So John had to make good on his promise.”

“He sang on a single that turned out to be a cut from Walls And Bridges, ‘Whatever Gets You Thru The Night,” Lennon recalled in Playboy. “He sang harmony on it and he really did a damn good job. So I sort of halfheartedly promised that if ‘Whatever Gets You Thru The Night’ became number one, which I had no reason to expect, I’d do Madison Square Garden with him. So one day Elton called and said, ‘Remember when you promised . . .” It wasn’t like I promised some agent or something, so I was suddenly stuck. I had to go on stage in the middle of nothing.”

Lennon performed three songs: “Whatever Gets You Thru the Night,” “Lucy in the Sky With Diamonds,” which John had recently recorded with Lennon’s help, and “I Saw Her Standing There,” an early Beatles hit that featured Paul McCartney’s lead vocals. Lennon introduced the last song.

“I’d like to thank Elton and the boys for having me on tonight. We tried to think of a number to finish off with so I can get out of here and be sick, and we thought we’d do a number of an old, estranged fiancé of mine, called Paul. This is one I never sang, it’s an old Beatle number, and we just about know it.”

“John was terrified,” lyricist Bernie Taupin told the Los Angeles Times. “The guy was throwing up in a bucket in the dressing room. He wanted somebody to lean on. I said, ‘I can’t do that. I can’t lead you on stage — you’re not Stevie Wonder. Just go out there and enjoy it.’ And he was fine.”