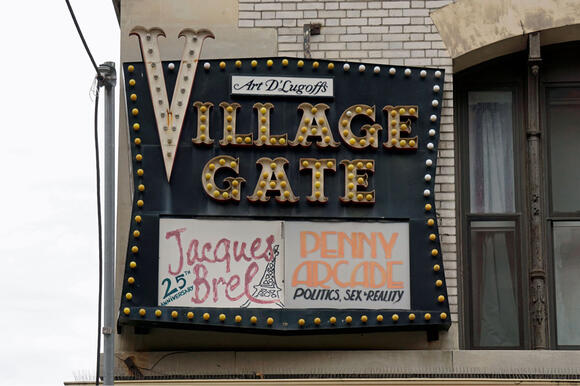 Art D’Lugoff opened the Village Gate in 1958 on the ground floor and basement of the former Mills House №1, a hotel for men down on their luck. The basement had been the hotel’s laundry room. By the time the Gate closed in 1994, it had become a Greenwich Village icon.

In the 1970s musical comedy revues like National Lampoon's Lemmings, with John Belushi and Chevy Chase, were presented upstairs at the Top of the Gate.

"A New Yorker in style and attitude, D'Lugoff had a kind of beatnik appearance, slender and bearded," noted the New York Daily News when D'Lugoff died in 2009. "He had a droll sense of humor, loved show business stories and was never shy about offering an opinion.

"D'Lugoff was one of those colorful, outspoken New York showmen and raconteurs who could have stepped right out of Guys and Dolls — only he also had a social conscience in his pocket."

D'Lugoff presented Paul Robeson and Pete Seeger when they were blacklisted in the 1950s. Lenny Bruce was hired when it was well-known that police waited in the audience to arrest him..

The Village Gate ghost sign endures on the corner of Bleecker and Thompson Streets. Two placards on the sign advertise two of D’Lugoff’s favorite shows: Jacques Brel Is Alive and Well and Living in Paris and performance artist Penny Arcade’s Politics, Sex & Reality.

When the “King of Rockabilly,” Carl Perkins, released “Blue Suede Shoes” in 1956, radio stations played its B-side, “Honey, Don’t.” Within a month, Cleveland DJ Bill Randle put “Blue Suede Shoes” into regular rotation and the song’s popularity spread across the country. Soon Perkins had a million-seller, one of the first records to be a hit on the country, rhythm & blues and pop charts.

Joe Strummer Mural, 112 Avenue A©Frank Mastropolo. The new book New York Groove: An Inside Look at the Stars, Shows, and Songs That Make NYC Rock tells more than 200 stories of the artists, writers, DJs, and impresarios who came together in Manhattan to make rock history from the 1950s to today. The Clash's tumultuous performances at a Times Square club are recounted in this excerpt.

Omega Oil was a liniment that promised to cure everything from weak backs and lumbago to sunburn and sweaty feet. The company moved to New York from Boston at the beginning of the twentieth century and spent decades advertising its dubious curative properties in newspapers and on walls across the country.

The luxury apartment buildings and hotels of Lower Manhattan’s Tribeca grew out of streets lined with commercial buildings. In the mid-19th century the area featured an exclusive residential neighborhood known as St. John’s Park, the square that surrounded St. John’s Chapel. Its demise came when Trinity Church sold the square to the Hudson River Railroad in 1867 for $1 million.

New York's upscale Columbus Avenue is lined with yogurt, gelato and traditional ice cream shops that cool off sweltering Upper West Siders; O O Wonder, Venchi and Van Leeuwen are some of the fancier outposts. A "ghost sign" — advertising a product or business that has long vanished — remains of a pioneer in the ice cream sweepstakes.

Richie Furay has been part of three influential bands that have produced a stack of hits: Buffalo Springfield, Poco and the Souther-Hillman-Furay Band. Yet Furay as a solo artist has said he's "never really had what I'd call a solid hit song."

Chicago, the self-described "rock and roll band with horns," does everything big. Formed in 1967, Chicago celebrates its 55th anniversary this year with the release on July 15 of a new album, Born for This Moment, their first LP of original songs in eight years. Its first single is "If This Is Goodbye," performed by vocalist and keyboardist Robert Lamm and vocalist Neil Donell.

Few songs are so strongly identified with soul singer Otis Redding as “Try a Little Tenderness.” Though everyone from Three Dog Night and Tom Jones to Michael Bublé and Chris Brown have attempted to put their own stamp on it, no one has been able to improve on Redding’s definitive performance.

The leather jacket and moody persona were only a part of the puzzle that was Lou Reed. Steve Katz of Blood, Sweat & Tears and Genya Ravan of Ten Wheel Drive remember Reed as a friend with a wicked sense of humor and a gracious heart.

The Rascals’ Eddie Brigati Interview: A Look Back at His Career and Solo Debut