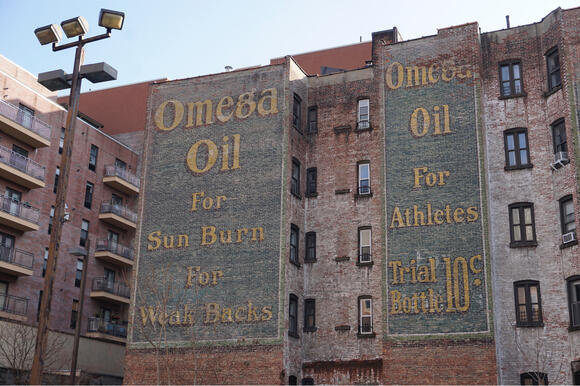 Omega Oil was a liniment that promised to cure everything from weak backs and lumbago to sunburn and sweaty feet. The company moved to New York from Boston at the beginning of the twentieth century and spent decades advertising its dubious curative properties in newspapers and on walls across the country.

A 1901 Brooklyn Daily Eagle ad decribed the wide range of ailments the oil would " cure":

Omega pioneered the use of endorsements by professional athletes. A 1934 New York Daily News ad featured boxer John L. Sullivan, who states, "You can put me down as saying that Omega Oil is fine stuff to rub on the body and limbs. Its green color suits me, too."

"The successful athlete doesn’t take chances with his physical condition," another ad advised. "Every other man wants to be strong and vigorous too, no matter whether he is a laborer, a merchant, a professional man or a preacher." 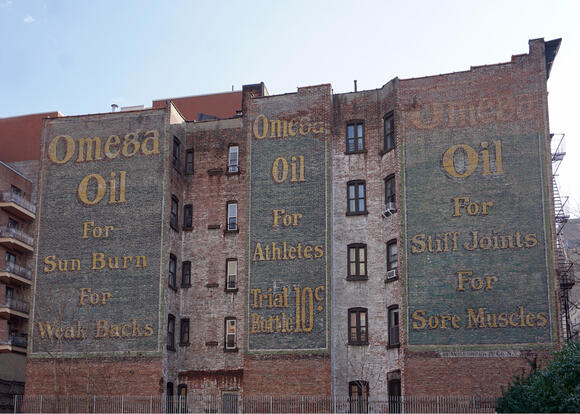 Omega Oil was acquired by Colgate-Palmolive-Peet in 1931. The brand disappeared sometime after 1957 when it was accused of false advertising by the Federal Trade Commission. Its majestic three-wall ghost sign remains in Harlem.

Joe Strummer Mural, 112 Avenue A©Frank Mastropolo. The new book New York Groove: An Inside Look at the Stars, Shows, and Songs That Make NYC Rock tells more than 200 stories of the artists, writers, DJs, and impresarios who came together in Manhattan to make rock history from the 1950s to today. The Clash's tumultuous performances at a Times Square club are recounted in this excerpt.

The luxury apartment buildings and hotels of Lower Manhattan’s Tribeca grew out of streets lined with commercial buildings. In the mid-19th century the area featured an exclusive residential neighborhood known as St. John’s Park, the square that surrounded St. John’s Chapel. Its demise came when Trinity Church sold the square to the Hudson River Railroad in 1867 for $1 million.

New York's upscale Columbus Avenue is lined with yogurt, gelato and traditional ice cream shops that cool off sweltering Upper West Siders; O O Wonder, Venchi and Van Leeuwen are some of the fancier outposts. A "ghost sign" — advertising a product or business that has long vanished — remains of a pioneer in the ice cream sweepstakes.

Richie Furay has been part of three influential bands that have produced a stack of hits: Buffalo Springfield, Poco and the Souther-Hillman-Furay Band. Yet Furay as a solo artist has said he's "never really had what I'd call a solid hit song."

Chicago, the self-described "rock and roll band with horns," does everything big. Formed in 1967, Chicago celebrates its 55th anniversary this year with the release on July 15 of a new album, Born for This Moment, their first LP of original songs in eight years. Its first single is "If This Is Goodbye," performed by vocalist and keyboardist Robert Lamm and vocalist Neil Donell.

Few songs are so strongly identified with soul singer Otis Redding as “Try a Little Tenderness.” Though everyone from Three Dog Night and Tom Jones to Michael Bublé and Chris Brown have attempted to put their own stamp on it, no one has been able to improve on Redding’s definitive performance.

The leather jacket and moody persona were only a part of the puzzle that was Lou Reed. Steve Katz of Blood, Sweat & Tears and Genya Ravan of Ten Wheel Drive remember Reed as a friend with a wicked sense of humor and a gracious heart.

The Rascals’ Eddie Brigati Interview: A Look Back at His Career and Solo Debut