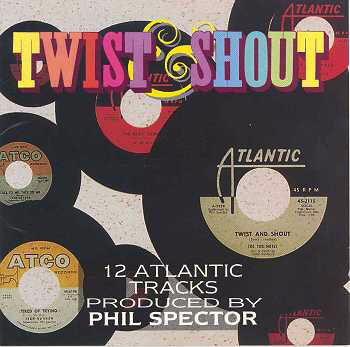 Since then, many have recorded “Twist and Shout,” from the Mamas & the Papas and Booker T. and the M.G.'s to Celine Dion and Mae West. Though the Isleys were the first to find success with the song, they were not the first to record it. The Top Notes, a little known R&B group from Philadelphia, first cut the song. Despite a star producer, the effort was a flop.

"Twist and Shout" by the Top Notes

The Top Notes, fronted by singers Derek Ray and Guy Howard, signed with Atlantic Records in 1960. The group cut a few songs—“A Wonderful Time,” followed by “Say Man"—but never had a breakout success. But 1961 brought an opportunity when Atlantic assigned a young producer to the group: Phil Spector.

Spector was working for producing legends Jerry Leiber and Mike Stoller and had racked up hits with Ray Peterson’s “Corrina, Corrina” and Curtis Lee’s “Pretty Little Angel Eyes.” Spector’s next assignment was to produce the Top Notes.

On February 23, 1961, Spector and the Top Notes recorded “Always Late (Why Lead Me On)" and its B-side, a song written by Bert Berns and Phil Medley. Berns would become one of the most prolific writers and producers in rock, responsible for “Under the Boardwalk,” “Brown Eyed Girl,” “Hang On Sloopy” and “Piece of My Heart.” But in 1961 Berns was a newcomer to the business who handed off “Twist and Shout” to Spector to produce. Berns reportedly fumed during Spector’s production of the song, believing it had the wrong tempo and feel.

"Twist and Shout" by the Isley Brothers

Berns later brought the song to the Isley Brothers, hoping for the energy the Isleys delivered on their hit “Shout,” recorded two years earlier. They delivered and the song became a hit in 1962. The Isleys’ version was the one copied by the Beatles in 1964.

And the Top Notes? When their version of “Twist and Shout” failed to chart, Atlantic terminated their contract. The group only released two more singles, 1962’s “Wait for Me, Baby” on Festival Records and “I Love You So Much” for ABC-Paramount the following year.