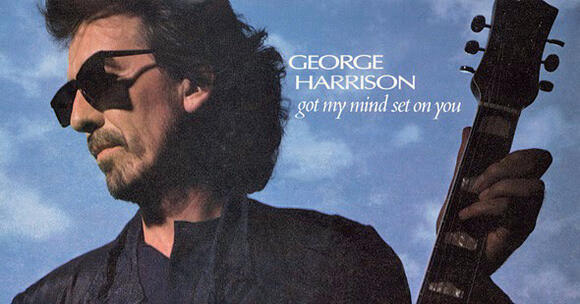 James Ray released the tune in 1962 with high hopes; it followed his debut hit the previous year, “If You Gotta Make a Fool of Somebody.” But Ray would not live long enough to know any further success. By sometime in the early 1960s (the exact date is unknown), Ray was dead of a drug overdose.

"I've Got My Mind Set on You" by James Ray

Harrison discovered Ray’s tune, titled “I’ve Got My Mind Set on You,” on his first trip to the US in September 1963. Harrison and his brother Peter visited their older sister Louise at her home in Benton, Illinois. At his sister’s urging, Harrison sat in with a popular local group, the Four Vests, for about an hour at a small club.

“I went to New York and St Louis in 1963, to look around, and to the countryside in Illinois, where my sister was living at the time,” Harrison recalled in The Beatles Anthology. “I went to record stores. I bought Booker T and the MGs’ first album, Green Onions, and I bought some Bobby Bland, all kind of things.”

Harrison also picked up Ray’s eponymous debut album, which included “I’ve Got My Mind Set on You.” Harrison already knew Ray’s work; “If You Gotta Make a Fool of Somebody” was part of the Beatles’ live set.

Ray, just five feet tall, was known as Little Jimmy Ray when he recorded “Make Her Mine” in 1959. Ray disappeared from the music scene after the single peaked at number 41 on the Billboard chart; by 1961 he was homeless, living on a Washington, DC rooftop.

While singing on the sidewalk for handouts, Ray was discovered by Rudy Clark, a mailman with dreams of becoming a songwriter. Clark would later write or co-write classics like “Everybody Plays the Fool,” “Good Lovin’” and “It’s In His Kiss (The Shoop Shoop Song).” Signed by Caprice Records, Ray recorded Clark’s “If You Gotta Make a Fool of Somebody,” a Top 10 hit on Billboard’s R&B chart that reached number 22 on the Hot 100 in 1962.

Ray’s follow-up singles, including Clark’s “I’ve Got My Mind Set on You,” went largely unnoticed. Harrison, however, remembered it during his 1987 Cloud Nine sessions with co-producer Jeff Lynne. Harrison sped up the song’s pace and dropped some of Ray’s downbeat lyrics:

Everywhere I go, you know / Bad luck follows me
Every time I’ve fallen in love / You know I’m left in misery

"Got My Mind Set on You" by George Harrison

The result was a power pop classic, one of the biggest hits of 1988. Harrison released two versions: the album cut at 3:51 and an extended track that ran 5:17.

Two quirky music videos directed by Gary Weis were also released. The first features a girl who watches Harrison and the band in an arcade movie viewer. A second video, which went into heavy rotation on MTV, has Harrison playing in a study surrounded by a dancing furniture and singing stuffed animals.

"Got My Mind Set on You" by George Harrison

Today James Ray is usually remembered as a footnote to Harrison’s number one hit. But a close listen to his early recordings reveals a sadness in his voice that foreshadows the tragedy to come.