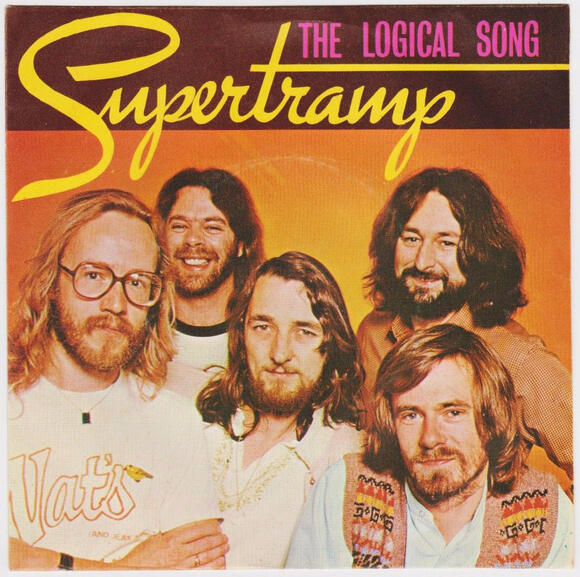 By 1977, British progressive rockers Supertramp had reached a crossroads. Their previous LP, Crime of the Century, hadn’t yielded a successful single and its follow-up, Even in the Quietest Moments…, could only deliver one hit, “Give a Little Bit.”

The band moved to California during this period and it would be two years before their next album was released. The more pop-oriented Breakfast in America became the group’s greatest success, with four hit singles: the title cut, “Take the Long Way Home,” “Goodbye Stranger” and their triumph, “The Logical Song.”

"The Logical Song" by Supertramp

Though credited to keyboardists Roger Hodgson and Rick Davies, “The Logical Song” was written by Hodgson during a break after Quietest Moments was released. Hodgson told Creating the Classics that he reached back to his own childhood for the lyrics.

“For many years I complained about being sent away to boarding school but I have to say that it spawned a lot of great songs and ‘The Logical Song’ was one of them . . .

“They left me with the question, ‘Please tell me who I am.’ I want to remember that joy-filled being that came into this world.”

In 1978, Supertramp entered Village Recorders in Los Angeles to co-produce with Peter Henderson the Breakfast in America LP. Supertramp liked to play together live in the studio. But with Davies on the Clavinet, Dougie Thomson on bass, Bob Siebenberg on drums and Hodgson at the Wurlitzer electric piano, the main room was packed tight.

Henderson told Sound on Sound that space had to be found for John Helliwell to play his saxophone so his sound wouldn’t be heard on another track. Thus the memorable sax solo of “The Logical Song” was played in the toilet.

“Everyone was playing together on the track, and we couldn’t have John’s sax bleeding onto the drums,” said Hodgson. “John kept moaning about his lot, but I think he actually quite enjoyed it.”

One other addition from outside the studio was the sound of a Mattel electronic football game, which punctuated the word “digital” in the lyrics. Hodgson explained in Something Else! how the sound effect was added.

“One of the band, I can’t remember who, was in the sitting room of the studio, playing away on this video game. We’d hear that sound, over and over, coming from the other room. I think, at some point, we decided: Why don’t we put that sound on it? And it worked. We were always looking to create new sounds.”

“The Logical Song” was the band’s most successful single, reaching number six on the Billboard Hot 100 in 1979. “I think it was very relevant when I wrote it, and actually I think it’s even more relevant today.” Hodgson explained in Songfacts that students can fall through a “huge hole” in the system.

“They don’t really prepare us for life in terms of teaching us who we are on the inside. They teach us how to function on the outside and to be very intellectual, but they don’t tell us how to act with our intuition or our heart or really give us a real plausible explanation of what life’s about.

“There’s a huge hole in the education. I remember leaving school at 19, I was totally confused. That song really came out of my confusion, which came down to a basic question: please tell me who I am.”

The Story Behind ‘They’re Coming to Take Me Away, Ha-Haaa!’

Inside the Mind of Jerry Samuels, aka Napoleon XIV. Novelty songs first appeared in the late 19th century and were popular on the radio into the 1980s. One of the most successful—and weirdest—was 1966’s “They’re Coming to Take Me Away, Ha-Haaa!” by Napoleon XIV.

Randy Bachman wasthe singer-songwriter and lead guitarist of the Guess Who in May 1970, weeks before promoter Bill Graham closed Fillmore East. Bachman recalls his final performance with the band at Fillmore East.

"That was a magic moment" The Magic Shop opened in 1988 well before Bloomingdale's, MoMA and a luxury hotel became its neighbors in New York's SoHo. The increase in the area's rental value spelled the end of the studio. Despite the offer of financial help from Foo Fighters frontman Dave Grohl, owner Steve Rosenthal was unable to buy the space from his landlord. While Rosenthal continues his business of mixing and restoring classic recordings, the Magic Shop closed March 16, 2016.

Arthur Conley’s Eternal Question: ‘Do You Like Good Music?’. By 1966, soul shouter Otis Redding’s career was at a crossroads. Rumored to be unhappy with Stax Records, Redding established Jotis Records with managers Alan and Phil Walden and producer Joe Galkin (the “J” in Jotis). With Jotis, Redding hoped to break and produce new talent.

Why Dave Mason Is 'Feelin' Alright'

In 1967 Dave Mason founded Traffic with Steve Winwood, Chris Wood and Jim Capaldi. The British band’s debut album that year, Mr. Fantasy, made them international stars. Despite their instant success, Mason left the band after the album was released, then returned for a few months in 1968.

‘Monday I've Got Friday on My Mind’

Beatlemania in Australia reached its peak in June 1964 when the Fab Four staged a three-week tour of the country. Hundreds of rock groups sprouted as a result, formed by teens who hoped to emulate their heroes from Liverpool.

Art D’Lugoff opened the Village Gate in 1958 on the ground floor and basement of the former Mills House No.1, a hotel for homeless men. The basement had been the hotel’s laundry room. By the time the Village Gate closed in February 1994, it had become a Greenwich Village icon.

‘Imagine us dressed up like the Beau Brummels’. Jack Casady and Jorma KaukonenErik Kabik Photography / Media Punch / Publicity Photo. Jorma Kaukonen and Jack Casady are among the 90 musicians and crew members interviewed in the new bookFillmore East: The Venue That Changed Rock Music Forever. In this excerpt Casady and Kaukonen, who played Fillmore East with Jefferson Airplane and Hot Tuna, discuss the outsized presence of impresario Bill Graham.

Life Behind the Scenes with the Go-Go’s

Gina Schock’s New Book Features a Treasure Trove of Photos. You may think you’ve stumbled into a time warp when you see how omnipresent the Go-Go’s have become in 2021. Formed as a punk band in 1978, the Go-Go’s — singer Belinda Carlisle, guitarists Charlotte Caffey and Jane Wiedlin, bassist Kathy Valentine and drummer Gina Schock — starred in 2020’s acclaimed Showtime documentary The Go-Go’s and haven’t slowed down since.

The Story Behind 'Tighten Up' by Archie Bell & the Drells. In the early 1960s, Archie Bell and the Drells were a struggling Houston vocal group performing their brand of “Texas funk” at local talent shows. In 1964, the group recorded a demo of a song called “Tighten Up.” Although they often performed the song live, the demo was soon forgotten.

De Robertis Pastry Shoppe closed in 2014 after more than a century serving Italian coffee, pastries, cookies and ices. Four generations of the De Robertis family worked at the pasticceria since it opened in 1904. John De Robertis, whose grandfather Paolo started the business, described the store’s early days. “They made pignoli, the seeded cookies, and they made coffee, cappuccino and as refrigeration came in they started making pastries, cannoli. Then as time went by they started making lemon ice. They catered to the Italians because that’s what everybody around here was used to.

The Drifters' 'White Christmas': An Appreciation

The Drifters (l-r) Bill Pinkney, Gerhart Thrasher, Clyde McPhatter, Willie Ferbee & Andre ThrasherPublicity photo. Thanksgiving is immediately followed by a brutal month of Christmas music overload. It’s inescapable; every radio station, department store, and building lobby engulfs us with tunes of the season. So when a great song rises above the holiday hype, it deserves recognition.

Avenue A was for decades the neighborhood to shop for baby carriages, strollers, cribs and toys. Ben’s Juvenile Mart and Schachter’s Babyland, with its kiddie horse ride in front, were a few doors apart near East 6th Street. Schneider’s Juvenile Furniture on the corner of 2nd Street was the last to leave the area in 2004.