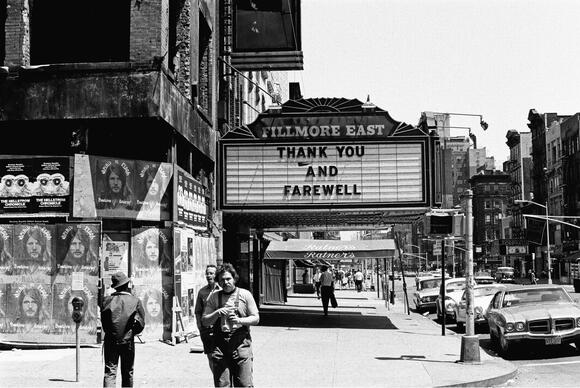 Randy Bachman was the singer-songwriter and lead guitarist of the Guess Who in May 1970, weeks before promoter Bill Graham closed Fillmore East. Bachman recalls his final performance with the band at Fillmore East.

Randy Bachman: Bill Graham did a great service to the world and to music. To put bands together like BTO and Sun Ra or Chicago and Clapton and Miles Davis, whoever he put on these shows, it was a great mixture of hip guys, jazz and rock and blues guys, to put us all together. Because basically, we’re all just musicians. We all liked the same music but we get pegged into playing blues or pegged into playing jazz or playing pop because we had a hit in that genre and everybody expects more from us on that genre over and over and over.

So I said to my doctor, I’ve got to go play this Fillmore gig. And so I called the band, said I’m coming back to play the Fillmore gig and they said, “Great, you’re out of the band, it will be your last gig.” And so I knew it was my last gig.

You’re looking at real podunk, bumpkin kids from Winnipeg playing rock and roll, going out into the world and dreaming of these iconic places, like Carnegie Hall, the Fillmore, Royal Albert Hall in London, these places where all these people played. And so suddenly to get asked to play the hippest of the hip, which is the Fillmore East and the Fillmore West, it was quite an amazing thing.

We think we’re not cool enough to play there because we have pop singles. You gotta play stretched-out, long, Electric Flag music, you know what I mean, Mike Bloomfield-kind of stuff and you have to really play your stuff.

So we had songs to go and play there. And we were determined not to play “These Eyes.” So we get to the Fillmore, we’re playing all of our album tracks, playing longer guitar solos, and just trying to fit in with the musicianship because we realized the audience is very musically inclined. They’re kind of just sitting there, grooving on the music.

And we keep getting encores. At the end of the night, another encore. Finally, we go out and Burton Cummings says, “We have nothing left to play.” And they yell out, “Why don’t you play ‘These Eyes’? And we look at each other stunned because this is our ultimate Top Forty million-selling song. So we play it; we figured, what the heck, and then everybody puts their arms around each other. It’s like their high school dance love song. It’s like a “let’s get engaged” and “let’s go steady” song. We were quite stunned by that whole “Yeah, they like pop music as well” kind of thing.

It was quite an amazing end of a career with the Guess Who. And American Woman was the Number One album and single at the time.

After Fillmore East closed, much of the rock concert scene moved north to the Academy of Music, renamed the Palladium in 1976. Promoter Barry Stuart tried to capture some of the Fillmore’s magic by reopening the hall Dec. 7, 1974, as the N.F.E. Theater — for New Fillmore East — with Bachman’s new band, Bachman-Turner Overdrive, the Bob Seger System, and David Barretto, a Latin-rock artist.

It was amazing. Of all the great places to play, I get to play the Fillmore, and then it gets reopened, I get asked to play the opening. We played LA the night before and then we flew overnight to New York and we went and did the re-opening of the Fillmore. That was absolutely another highlight in my life. And I saved the t-shirt from that but I don’t have it, it’s gone. I wish I had it.”