It Began as an Ode to a Long Island Community 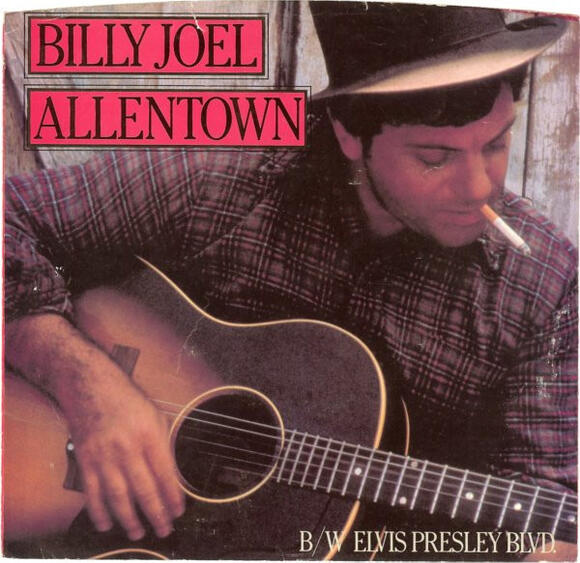 When struggling singer-songwriter Billy Joel began touring in 1971, his fans in cities like Bethlehem and Allentown were what Joel would call his “bread and butter.” From that perspective, Joel saw how the area had been decimated by the loss of jobs.

By 1982, Joel was a superstar, mixing piano-driven ballads with flat-out rockers like “It’s Still Rock and Roll to Me,” his first number one single. That year Joel released the LP he would call his favorite, The Nylon Curtain. Influenced by the songwriting style of John Lennon and Paul McCartney, the album was a hit with critics and fans. Joel told the Morning Call what inspired him to write its title track, “Allentown.”

“I remember reading about how the decline of the steel industry had been affecting the Lehigh Valley, and I decided that’s what I was going to write the song about…

"I had been touring since the beginning of the ’70s, so there was maybe close to 10 years seeing America and wanting to write about what I’d seen…

"It’s a song about being out of work, and people may not put that together with rock stars. But rock stars aren’t born, they’re made, and they start out being musicians. Musicians know all about unemployment. You’re unemployed a lot, and I think there’s a great deal of empathy between musicians and people who are out of work…

"To be fair, I was writing about the region, not necessarily Allentown itself. I talk about ‘they’ve taken all the coal from the ground.’ There’s no coal in that area, but there is coal mining in Pennsylvania. I used Allentown as a metaphor for the region.”

In fact, the song was originally about neither Bethlehem nor Allentown. Joel came up with the chord progressions for “Allentown” a decade earlier but struggled with the lyrics. The song, Joel told James Lipton of the Actors Studio, was based on his Long Island, NY hometown.

“I wanted to write kind of a Woody Guthrie kind of song. It took years to come up with ‘Allentown.’ It was originally titled ‘Levittown.’ And I tried to write a song about Levittown. So it goes:

“Then in 1982 when the Rust Belt kicked into high gear and the steel industry took a big dump, we played in Allentown and I said ‘Allentown. Allentown. That’s an American name, it’s like Jimmytown, Bobbytown, Tommytown.’”

“Allentown” reached number 17 on the Billboard chart and became a blue-collar anthem. Joel said it was unusual for one of his songs to germinate for years before taking shape.

“Usually when I’m writing, I try to write fairly quickly. If a song sits around too long, it starts to take on a stink. Most of my songs are written in one sitting, two sittings maybe. Those are the ones I like the best, anyway.”