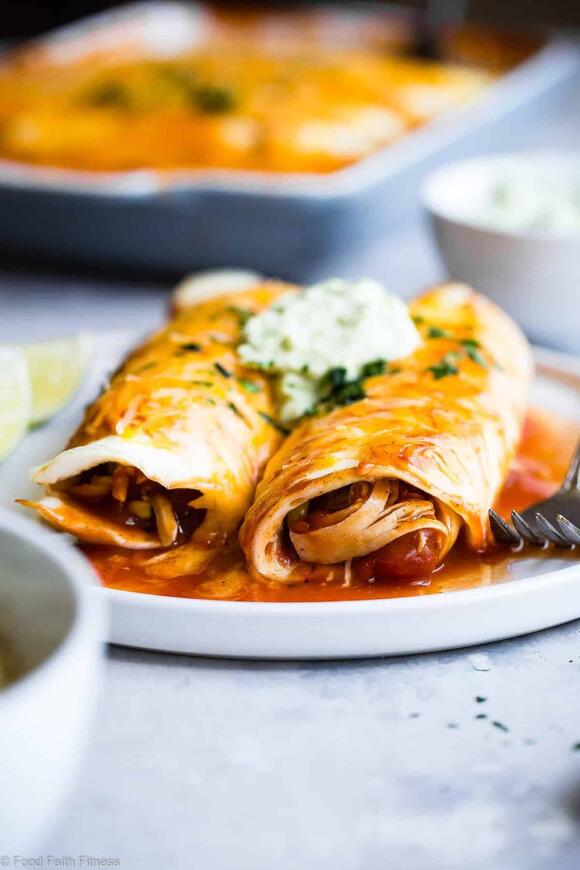 Pin This Recipe For Later!

Name something better than a chicken enchilada.

I could eat crock pot enchiladas or chicken enchilada casserole or, who knows, some breakfast version?

I should make that.

Either way. They are the bomb.com and there is no one who doesn't like them.

UNLESS you are watching your carbs...then you probably are sad that you have to miss out on their cheesy, saucy deliciousness and no Instant Pot chicken enchiladas are in your future...

Typically, enchiladas are not what one considers “healthy.” They’re loaded with a lot of heavy, saturated fat and refined carbs that make them something you don’t want to eat on THE REG. You guys know I’m all about balance though, so just wanna give the HEADS up that it’s also totally okay to eat them in their cheesy, tortilla glory and TRULY enjoy them every so often! But if you wanna eat them, liiiiike, everday? (Me! Me!) Then you’re going to be all over these low carb white chicken enchiladas!

How many carbs are in Chicken Enchiladas?

I’m always up for reprogramming classic recipes to make them better for you alternatives WITHOUT sacrificing on texture and flavor! This low carb chicken enchilada casserole is going to be a winner in your books because it brings all that Mexican flavor and cheesy goodness to your plate, but also cuts down on carbs! For each serving of enchiladas, there is about 26 grams of carbs.

How to make Low Carb Tortillas

Ok, do you want to know a BIG secret? The tortillas I use to make low carb chicken enchiladas aren’t tortillas at all! WHAT now!? That’s right, to make low carb tortillas I use none other than versatile and mild tasting egg whites! To make them, you will want to heat a small pan over medium high heat, spray it with cooking spray and pour in some egg whites. Cook for a couple of minutes, then carefully flip the “tortilla” and continue cooking on the other side for an additional couple of minutes. Voila- now you have low carb tortillas!

What else can I use instead of Egg Whites?

If you’d rather not use egg whites to make this low carb chicken enchilada recipe, there are other options as well! Feel free to make and use coconut flour tortillas or tortillas made of cheese instead if you’d rather.

Bring a large pot of salted water to a boil. Add in the chicken breast and cook until it’s no longer pink inside. Remove the meat from the water and use 2 forks to shred the chicken. Set it aside in a small bowl.

Cook up your egg white “tortillas” as detailed above!

Heat up a splash of oil over medium-high heat in a large pan. Add the garlic and chopped onions and cook until they are soft. Add in the blended tomatoes, salsa, and spices and season to taste with salt and pepper, if needed.

Take one “tortilla” and spoon a line of the tomato mixture down the center. Add in some of the chicken as well as a bit of the corn, and roll it up tightly. Place the rolled tortilla in the baking dish, securing it with a toothpick if needed. Repeat with other tortillas and fillings. Top with the enchilada sauce and grated cheese.

Bake your enchiladas until the cheese is melted and bubbly. Serve them up and DEVOUR!

What to serve with Enchiladas

Although these enchiladas are incredibly delicious and shine all on their own, it’s always fun to cook up some side dishes to serve alongside them! I recommend adding a side of keto mexican cauliflower rice as well as a fresh and tasty mexican grilled corn salad with jalapeno and avocado to your plate as well.

How to Freeze Enchiladas

To freeze these enchiladas, I recommend assembling them, then covering the casserole dish tightly with plastic wrap followed by aluminum foil. Label the enchilada casserole with the date and freeze for up to one month. When you want to bake and enjoy it, simply thaw it in the fridge for 24 hours, remove the foil and plastic wrap, and bake until the cheese is hot and bubbly!

For the Avocado Crema:

This crowd-pleasing, gluten free Paleo Carrot Cake with Almond Flour has a luscious cashew "cream cheese" frosting and is easy to make!. OH UH HUH YES. IT IS HERE. It is the season to put vegetables in our dessert.

This deliciously smoky Chicken Pesto Sandwich hits the spot! Flavorful and protein-packed, it's the perfect sandwich for lunch or dinner!. Oh HELLO there crusty bread with melty cheese, smokey chicken and the bright and zingy herby pesto!

This Carrot Cake Bread has all the flavors of your favorite spiced cake, but in loaf form! A carrot-y, nutty, and cinnamon-y sweet snack!. Ok people, Easter is coming up fast and you know what that means here in FFF land! Yup, that’s right- an influx of absolutely delicious carrot cake recipes! If baking up a batch of carrot cake paleo magic cookie bars wasn’t enough, and even dairy free carrot cake cheesecake didn’t fully do it for you, then you NEED to make this moist carrot cake bread recipe! That’s right- it is incredibly soft and moist and isn’t one bit dry. It’s also extremely flavorful with all those warm spices and perfectly sweet from the coconut sugar and natural sugars found in the carrots and pineapples. On top of all this goodness, this carrot cake bread is also perfect for all ages- it’s a crowd pleasing, soul nourishing snack to share with your loved ones this Easter season!

Have a morning fiesta with this easy and flavorful Mexican Breakfast Casserole! Perfectly spiced and filling to make for a delicious breakfast!. If you're a fan of taco Tuesday than this breakfast is going to be your new favorite way to start the day.

This Low Carb Keto Carrot Cake has amazing texture and is perfectly spiced! Made with healthy fats, great flavor and without sugar or gluten!. Just warning you. I don't think all the carrot cake recipes we already have, like gluten free carrot cake cupcakes and paleo carrot cake, are enough...

Super tender and moist Banana Pineapple Bread is a perfect combo of these 2 fruits in loaf form! A deliciously sweet spin on a classic snack!. BANANAS AND PINEAPPLES TOGETHER. Honestly, these are my two favorite fruits so this bread is giving me ALL THE FEELS 😍.

These Air Fryer Cinnamon Rolls are perfectly fluffy and cinnamon-y sweet! Your favorite traditional breakfast treat with a trendy twist!. Develop a "normal" cinnamon roll recipe but make it trendy.

This No Bean Whole30 Keto Chili in the Instant Pot is a meat lovers dream! A paleo chili recipe that's a healthy weeknight dinner for the whole family!. LOOK AWAY veggie friends! This recipe is NOT FOR YOU.

Pass on the takeout and try this Beef with Garlic Sauce! Flavorful, filling, quick, and super easy! Your family will surely ask for seconds!. "It's like a better version of restaurant beef and broccoli"

TheseHomemade Healthy Gummiesare only 2 ingredients, have no sugar added and are paleo & whole30 friendly! Kids and adults will love them!. 2 words for you: HEALTHY. GUMMIES. Yep. I went there and I am SO EXCITED ABOUT IT.

These Keto Cream Cheese Cookies are sure to satisfy your cookie craving! A perfect sugar-free/gluten-free combo of sweet and spice!. But it randomly worked in the keto low carb breakfast bars and so why not try out cookies?

A warm and crispy classic, these Dairy Free Waffles can be made gluten free, too! Your favorite breakfast food done simply and SO deliciously!. My dad's famous waffles are rolling onto the scene!

Your favorite Mexican dish made even easier! Instant Pot Chicken Enchiladas are perfectly spicy and cheesy, a gluten free & healthy dinner!. I know, that was very excited....but when you taste these little bites of cheesy, Mexican BLISS...you will understand.

This easy Homemade Keto Low Carb Cereal tastes like cinnamon toast crunch but its gluten/grain/dairy/sugar free! Only 6 ingredients!. It’s time to separate the right cereal eaters from the wrong cereal eaters with this one question:

Satisfy your chocolate craving with this Dairy Free Chocolate Cake! Perfectly moist and decadent, made with ZERO dairy!. This cake is the chocolate cake version of paleo lemon bars.

You'll be adding this Keto Chocolate Frosting to almost any of your desserts! Decadently delicious, perfectly chocolate-y, and sugar free!. That is LUSCIOUSLY smooth and fluffy....in fact it might not even make it's way to the top of your avocado chocolate cake because you will just eat it with a spoon.

It's hard to believe this delicious Keto Chocolate Cake has no sugar! Free of gluten and full of healthy fats, it's a decadent keto dessert!. Keto friends, I am about to blow your mind.

This delicious Keto Tomato Soup is possibly the best tomato soup you will ever eat! Perfectly creamy and full of flavor and simple to make!. If it you ate it with a healthy egg salad grilled cheese sandwich. But, then it wouldn't be keto, so you probably won't.

Save oven space with this Instant Pot Chocolate Cake! So tender, fudge-y, and perfectly sweet, this cake is the perfect treat!. If you're wondering what in the heck a cake is doing in the Instant Pot, blame the Instant Pot Banana Bread.