The 2022 NFL Combine is here! Yes, 324 NFL Draft prospects have gathered in Indianapolis, IN to showcase their skills and abilities, hoping to raise their draft stock. Many football fans like to watch the testing, seeing these remarkable athletes do remarkable things. Over the years, the NFL Combine records for these tests have been set quite high.

However, with science advancing, athletes are able to do things incredible things now. Will one of the NFL Combine records be broken this year? While the likelihood is low, it is possible, which is what makes watching so fun.

Below, we have the all-time NFL Combine records in the 40-Yard Dash, Bench Press, Vertical Jump and other tests.

Yes, there have been faster NFL 40-Yard Dash times from NFL players. For example, Bo Jackson ran a 4.12-second 40 time, but that was during the hand-timed era.

John Ross owns the official record, which was set back in 2017. Here are the next fastest 40-Yard Dash times recorded at the Combine.

The NFL Combine tests how many bench reps a player can do at 225 points. The record for this was set by Stephen Paea (49) back in 2011. 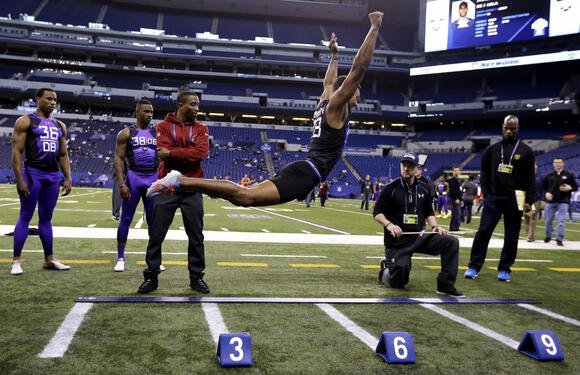 Not only did Byron Jones top the NFL Combine records with his broad jump in 2015, but he also set a new world record! He still holds this world record today.

Breaking Down the Complicated AFC South

In honor of "Throwback Thursday," let's throw it back to last season when the Indianapolis Colts were a fringe playoff team. The Tennessee Titans were the AFC's top overall seed and have had consistent success under Mike Vrabel. The Jacksonville Jaguars were in shambles during and after the Urban Meyer saga. And, well, there were problems in Houston. In other words, half of the AFC South were good/decent ball clubs and the other two would select near the top of the draft in April.

Yikes. After the last two weeks of embarrassingly close defeats, it is safe to say that doubt has officially plagued the Cincinnati Bengals. Additionally, if things only get worse, there is no question as to who will take the fall.

NFL Week 2 is nearly in the books. If you are a Darnell Mooney fantasy football owner and you had him in your starting lineup, hopefully you found strong performances elsewhere. Of course, if you read our Week 2 Start 'em Sit 'em, then you may have sat Mooney this week.

With two weeks of football under the belt, we are already seeing the top players separate themselves from the pack. Names that we expected, Josh Allen and Patrick Mahomes, are of course on top of the NFL MVP tracker. While the big-name guys get the shine, players like Tua Tagovailoa and Carson Wentz have logged huge games as well.

Every year in the NFL, we find that during Weeks 2-4 the NFL starts to sort itself out. After an opening week full of surprises, Week 2 gave plenty of teams a reality check one way or another. Although there is still plenty of football to be played, there is no question that, once again, there were way too many overreactions in Week 1. With two weeks of football behind us, here are your NFL Power Rankings for Week 3 of the 2022-23 season.

The Sun Belt is the New 'Group of Five" Powerhouse

It's officially Week 3 of the 2022 college football season and boy, oh boy has it been a wild season already. Shakeups, dropdowns, and drama have filled the AP's top-25 polls for the last two weeks. Confusingly, Georgia just moved up to the number one slot, over the Crimson Tide, whom they beat last year for the championship title. This move has fans everywhere scratching their heads as to why they weren't ranked number one overall already. Amongst this chaos from the AP poll voting, one conference systematically knocked the traditional "Power Five" schools out of alignment. Of course, we are talking about Sun Belt football.

The NFL world is not a stranger to negative Dak Prescott injury news. However, the fact that it is coming in Week 1 is certainly disheartening to Dallas Cowboys fans, Dak Prescott fantasy owners, and the NFL community as a whole.

Jake Spavital is Must Prove Himself Quickley at Texas State

In 2018, Texas State made Jake Spavital the new head coach in the hopes of breathing life into the dismal prospects for the university’s flagship athletic program. It’s no secret Texas State football hasn’t had much success. Their only claim to fame was over three decades ago when they won two national championships, mind you, at the FCS level.

It is that time of the year! Sports fans all around the world can smell football in the air. As the summer begins to wind down, training camp for all 32 NFL teams is in full force. We have created our NFL rankings of the NFL top 100 players of 2022. Each article will be split up into 10 different players, starting at 100-91 and moving all the way to 10-1.

After a weather day, the Las Vegas Raiders and Jacksonville Jaguars faced off in the 2022 NFL Hall of Fame Game. Both teams entered the game with new head coaches, with Josh McDaniels and Doug Pederson coaching their first games with the Raiders and Jaguars, respectively. It was also many players' first taste of NFL action with their new teams, including Raiders rookie running back Zamir White.

As NFL Training Camps around the country begin, we are given more information about teams and players. In particular, fans are often interested in learning about where the progress injured players are making and when we can expect them to return to the field. Today, we were given a Michael Gallup injury update from the man himself.

Where Could Jimmy Garoppolo Be Traded?

The Most Consistent Fantasy Football RBs

If you want to win your fantasy football league, you need to hit early on running backs. While the "Zero RB" strategy has picked up in popularity in the past few years, the fact is getting a good running back early that can produce for your the entire season is massive. While it's important that top players have a high ceiling, it is just as important that your top guys are also predictable and consistent.

It's officially fantasy football research season, and everyone is refreshing their memories of how everyone performed last NFL season. However, we too often see fantasy football players use the end-of-season rank as the be-all and end-all. Lumping the entire season together doesn't tell the entire story.

Leonard Fournette's Fantasy Value Dropping Due to His Reported Weight

If you are a fantasy football fan and on the internet, you probably heard the recent news about the Tampa Bay Buccaneers running back, which has the Leonard Fournette fantasy football value dropping, at least speculatively. The news that everyone is talking about is that the Buccaneers coaches are unhappy with the newly-extended running back, after he showed up to camp weighing 260 pounds.

A Look at the Previous Orlando Magic Number One Overall Picks

With the upcoming 2022 NBA Draft, the Orlando Magic hold the number pick. There are conversations surrounding who should go number one: Jabari Smith, Chet Holmgren or even Paolo Banchero. The consensus is that Jabari Smith Jr. from Auburn will be selected number one. Since the regular season ended in April, the Magic have been tasked with evaluating and finding their next cornerstone.

We have seen multiple start-up professional football leagues over the past few years. However, the USFL is the first in recent history to finish its regular season, meaning we will have league awards for the regular season. We have tracked 2022 USFL Stats all season long. After 10 long weeks, it was Tampa Bay Bandits quarterback Jordan Ta’amu who finished as the USFL season as the passing leader.

It is officially 80 days until the official kickoff of the 2022 NFL season! As our official countdown here on FlurrySports, we will be releasing the best players to ever wear the jersey number of the number of days remaining. Follow along to keep track of how many days until the NFL season, and share who YOU think the best player to ever wear that jersey number is! Click here to see the best NFL players from yesterday.

As we head into a lull in the NFL offseason, we have a few teams wrapping up their minicamp and speaking to the media. The Arizona Cardinals are one of these teams. While speaking to the media, head coach Kliff Kingsbury sharing an interesting nugget that has the Eno Benjamin fantasy football value on the rise.