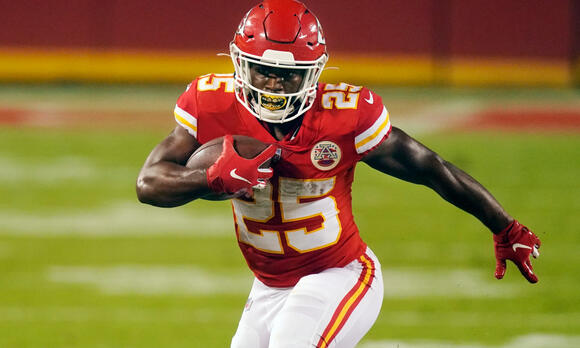 On Sunday Night Football, we saw two top AFC contenders face-off, though only the road team truly showed up to play. The Kansas City Chiefs were handled with ease, and injuries were the main takeaway from their side. One of the biggest injuries was to their running back, and we recently got a Clyde Edwards-Helaire injury update that provides a bit of clarity.

While the Clyde Edwards-Helaire injury update suggests he’ll miss some time, it’s possible the injury is not as severe as it could have been.

Per Ian Rapoport, Edwards-Helaire sprained his MCL and will miss a few weeks. It appears he is an obvious candidate to be put on short-term IR, which means he would be out at least three weeks. While this is not news a 2-3 football team would hope to hear, it clearly could have been much worse.

Still, the Chiefs need to start winning games. They sit on the bottom of their division looking up at the Los Angeles Chargers, who already have a win against them. Sure, the Chiefs offense runs through Patrick Mahomes. However, having a strong running game helps to balance out this offense, and a legitimate threat out of the backfield is something Andy Reid-coached teams have typically featured.

Who’s Up For the Chiefs?

Following the Clyde Edwards-Helaire injury update, what is next for the backfield of the Chiefs?

If we look at the roster right now, it’s possible that Kansas City features a complementary duo of Darrel Williams pounding the rock and Jerick McKinnon being the change-of-pace, receiving back. However, neither player has been especially outstanding.

The Indianapolis Colts were looking to trade Marlon Mack a couple of weeks ago, and it’s a trade that could be useful. We haven’t seen much from Mack this season, coming off a major injury. However, if he looks anywhere close to his old self, he could be a solid contributor for this Chiefs team.

Todd Gurley is also a name being floated. The veteran running back has knees made of jelly, but he is someone that did have some success for the Atlanta Falcons last season. It’s concerning the Baltimore Ravens worked him out, then passed on him for Devonta Freeman and Le’Veon Bell. Still, he could be a player worth exploring.

What’s wrong with Duke Johnson? He was released by the Jacksonville Jaguars, of all teams, this season, which has to be a humbling experience. Of course, Johnson is not a bell-cow back. However, he is a capable runner and receiver out of the backfield, as CEH is. This seems like a smart, cheap replacement option for the Chiefs. If he can have any kind of success, it’s possible he can leapfrog one of the unexciting options that are currently on top of the depth chart.

Why the Cincinnati Bengals Are Super Bowl Contenders

Every Monday during the NFL season, after a full slate of unpredictable outcomes on Sunday, analysts and fans love to overreact. Narratives change on a weekly basis on which teams are contenders and which teams are pretenders. One narrative that is not an overreaction is that the Cincinnati Bengals are a legitimate contender.