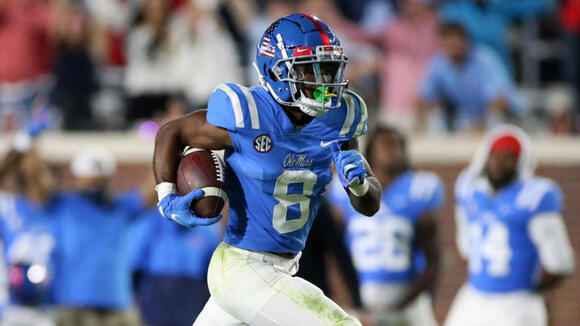 The 2021 NFL Draft is now just two weeks away. The three-day event is slated to take place from April 29th-May 1st in Cleveland, Ohio. The draft is always a weekend full of new beginnings and hope for the future. This goes for the members of the incoming draft class, NFL teams and fans alike. Among the highly-touted players in this year’s NFL Draft is wide receiver Elijah Moore out of Ole Miss.

The following is a complete NFL Draft profile for Elijah Moore including stats, highlights and a mock projection.

Elijah Moore will be the third uber-talented receiver to come out of Ole Miss in the last three years. He, D.K. Metcalf and A.J. Brown were all teammates in Oxford in 2018. The Rebels made a coaching change when they hired Lane Kiffin last offseason. Moore showcased his versatility in Kiffin’s high-octane offense throughout his junior season. He found success lining up both outside the numbers and in the slot. While his size would suggest that he is better suited for the slot at the NFL level, we have seen small, quick receivers do damage on the perimeter before. Speaking of quickness, Moore has a whole lot of it. He combines his speed with athleticism, toughness and strong hands. He is truly a threat to break a big play every time he touches the ball.

While Moore possesses excellent physical speed and agility, his route running could certainly stand to be polished at the next level. With size being one factor working against him, he also hasn’t proved to be a very effective blocker on running plays. His smaller size also prevents him from having a large catch radius. He could struggle against long and physical NFL corners when running routes down the field.

All 2021 NFL Draft Projections are taken from the latest CBS NFL Mock Draft by Ryan Wilson.

Elijah Moore is currently projected to be drafted by the Green Bay Packers at No. 62 overall. He is the eighth wide receiver selected in this mock draft.