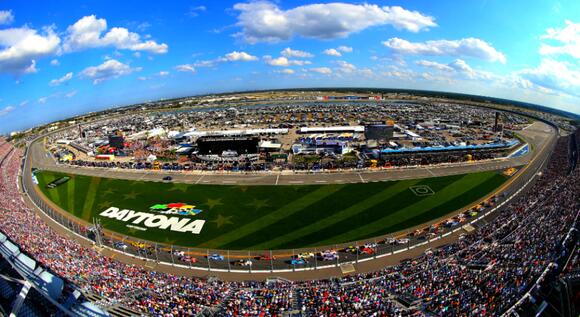 Happy early Daytona Day! The 2021 NASCAR Cup Series season will commence this weekend with the annual running of the Daytona 500. Like Daytona International Speedway, the race traces its history back to 1959 and is widely recognized as the most prestigious race on the schedule. The Daytona 500 has been the opening race of the NASCAR Cup Series season every year dating back to 1982.

Whether you fall into the category of die-hard racing fans or are more casually involved, the Daytona 500 is one not to miss. This article contains all of the vital information necessary to get you ready for the biggest weekend of the NASCAR season including the Daytona 500 start time, starting grid and statistics.

The method for determining the Daytona 500 starting order is different from all other races on the NASCAR Cup Series schedule. The two cars on the front row will be determined through a standard individual-car qualifying session which is scheduled for Wednesday night. The drivers that run the fastest laps during this time trial event will start at the front of the field.

The next 34 cars in the Daytona 500 starting lineup is determined by the Duels. Scheduled to take place on Thursday night, the Duels are a pair of 150-mile races to set the order of the 500 field. Cars that finish with an odd-numbered placeholder in the individual qualifying session (third, fifth, etc.) will race in Duel 1. Cars with an even-numbered placeholder (fourth, sixth, etc.) from the time trials will race in Duel 2.

Note that when it comes to improving their starting position, drivers only have to beat the drivers in their respective duel race. Duel 1 drivers will line up in the order of finish on the inside row while Duel 2 drivers will do the same on the outside.

So, if the Daytona 500 field contains 40 cars and we've accounted for the qualifying procedures of 36 thus far, what about the other four? The last two rows on the starting grid are for cars that do not have a charter exemption. These will be drivers and teams who are not running a full-time NASCAR Cup Series schedule in 2021. The fastest car on the open-entry list in each duel race receives a spot in the field. The last two spots are granted to the two fastest cars in individual qualifying who did not qualify through the duels.

Impact of the USFL and XFL On Professional Football

There's a common saying in America that refers to Sundays being "owned" by football. Truthfully, the game has come to dominate Saturdays as well, with the help of college football contests. Autumn is for football it seems, but the spring of 2023 will bring the return of not one, but two separate professional leagues: the XFL and the USFL.

The 2023 NASCAR Cup Series season is nearly upon us! The full complement of Speedweeks events and racing will begin early next week at Daytona International Speedway. Of course, NASCAR's opening week will be capped off with the 65th running of the Daytona 500. As always, there are several NASCAR driver changes that have transpired. From a former champion switching teams to the dynamic rookie duo joining the fray, the landscape looks a bit different than it did just one year ago.

We have finally arrived at Super Bowl week. While the Kansas City Chiefs and Philadelphia Eagles still have their eyes on hoisting the trophy, 30 other teams have already shifted their focus to the offseason. Much of this offseason process will be focused on the 2023 NFL Draft. For the Green Bay Packers, it's almost exclusively on the draft, since they are allergic to outside free agents.

Will the Lakers Trade For Kyrie Irving?

Less than one year after Kyrie Irving proclaimed his love for the organization and his intent to stay with the Brooklyn Nets franchise long-term, Kyrie Irving requested a trade on Friday. Irving has stated he wishes to be moved prior to Thursday's NBA Trade Deadline or he will leave this July in free agency.

Where Will Kyrie Irving Be Traded?

Less than one year after Kyrie Irving proclaimed his love for the organization and his intent to stay with the Brooklyn Nets franchise long-term, Kyrie Irving trade was requested on Friday. Irving has stated he wishes to be moved prior to Thursday's NBA Trade Deadline or he will leave this July in free agency.

The puck drops on the 2023 NHL All-Star Weekend on Friday, February 3rd. However, the three-on-three tournament will take place on Saturday, with four teams competing for their slice of one million dollars. The 2023 NHL All-Star rosters are set, featuring many of the league's best players.

The 2023 NHL All-Star Weekend Schedule is set to take place from FLA Live Arena in Sunrise, Florida beginning this Friday, February 3rd. We have a full weekend of festivities, which is sure to engage both casual and die-hard hockey fans.

Why is Josh Allen Not on the NFL Pro Bowl Roster?

The 2023 AFC Pro Bowl roster has been set ahead of this weekend's activities. Additionally, AFC Pro Bowl replacements have been named as well, and there are a lot of them.

Just when you thought we would be having a weekend without NFL football, the 2023 NFL Pro Bowl is here to fill the void. Well, somewhat at least. The 2023 Pro Bowl rosters and replacements have been finalized, so let's go over the lists below.

Super Bowl LVII is finally here, and we have a terrific matchup between the Kansas City Chiefs and the Philadelphia Eagles. This also means we don't have much time left to get your Super Bowl Squares grid filled in with your friends, family and co-workers' names! Luckily, FlurrySports has a free printable Super Bowl Squares template for you to download and fill out!

The Super Bowl 2023 is set, which means 30 of the 32 picks of the NFL Draft order 2023 are set. Well, we actually only have 31 picks in the first round of the 2023 NFL Draft, since the Miami Dolphins had theirs taken away. Following the Sean Payton trade today, the other first-round draft pick the Dolphins once had switched hands once again.

Drivers, start your engines!!! The 2023 NASCAR Cup Series season schedule is nearly upon us, and not a moment too soon! This coming weekend, NASCAR will descend on the Los Angeles Memorial Coliseum for the Busch Light Clash exhibition event. Then, it's full speed ahead to Daytona Beach for the full complement of Speedweeks events. The 65th running of the Daytona 500, which is set to go green on Sunday, February 19th, will mark the first official points-paying race of the NASCAR Cup Series season.

Did the NFL Refs Rig the Championship Games?

The NFL's Conference Championships have come and gone, and Super Bowl LVII has been set, but the drama from the penultimate game of the NFL season still lingers. The Cincinnati Bengals and San Francisco 49ers may have valiantly lost, but the sour taste of defeat still lingers. And as we all know, the internet keeps receipts. Stay tuned, as we will dive into the latest round of drama, thanks to NFL refs, that will launch some two teams into the offseason.

Will the Rock Return at the WWE Royal Rumble?

One of the biggest rumors for the 2023 WWE Royal Rumble on Saturday is that The Rock would return to the WWE. In fact, The Rock's Royal Rumble odds to win the WWE match are rather favorable, which would set up a WrestleMania match with Roman Reigns. If you want to know what we think, check out who we think will win the Men's Royal Rumble match.

The 2023 WWE Royal Rumble is this Saturday, and it's shaping up to be an exciting event. As with every year, the Rumble will feature returns and surprises. However, Saturday's event could end up being one of the biggest in a while. Below, we will go over five possible winners for the 2023 WWE Men's Royal Rumble.

The 2023 WWE Royal Rumble is this Saturday, and it's shaping up to be an exciting event. As with every year, the Rumble will feature returns and surprises. However, Saturday's event could end up being one of the biggest in a while. Below, we will go over three possible winners for the 2023 WWE Women's Royal Rumble.

The 2023 WWE Royal Rumble will take place Saturday, January 28th in the Alamodome of San Antonio, Texas. Every year, the Royal Rumble is one of the most exciting, must-watch events in professional wrestling. This is due to the surprises, quality of wrestling and overall fun of the event.

Texas State football has been at the bottom of the barrel in the public eye for seemingly as long as time itself has lingered. After parting ways with supposed QB guru Jake Spavital, the university did not take long to find his replacement, G.J. Kinne. However, I believe the new Texas State football coach won't last long either.

Coming into Tuesday night's game, Rutgers was tied with Michigan for second place in the Big Ten basketball standings with a 5-3 conference record. Penn State came into the game just one game behind them, at 4-4, and leading the rest of the pack trying to make a push for the top spots in the conference.