Green Bay Bar, The Abbey, Gets Needed Funding From Barstool

The year 2020 ended on a positive note for one bar owner in Wisconsin, as the found help from the Barstool Fund. Kerry Counard owns The Abbey bar, next to St. Norbert University in De Pere, WI. The Abbey has been a favorite of both locals and visitors. Every Sunday, the bar was packed with die-hard green and gold fans, as they cheered for Lambeau Leaps. 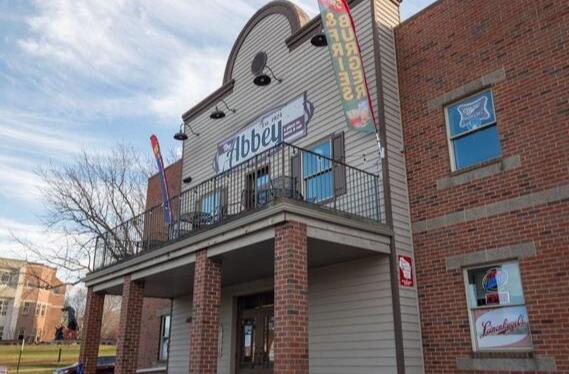 The pandemic spelled disaster for the bar. On March 18th, Counard was forced to do take out only. In order to keep customers coming through, he started a “free beer Friday.” where a free beer was given out with takeout. Counard also implemented a “Pay-It-Forward” program. This program helps front-line workers. Counard took donations and turned them into gift cards to send a meal to those fighting the pandemic.

Like other small business owners, Counard was working as hard as he could to pay both utilities and his employees. But then a shining light appeared…

On December 18 th , 2020, Counard received a message from a former employee. Detailed in the message was an attached video. The video showed Dave Portnoy, the owner and founder of Barstool Sports, expressing his displeasure that the government was not giving small businesses enough help.

Counard had previously applied for grants and help within Wisconsin, but saw the Barstool Sports opportunity as a chance to positively affect his small business. This shined some hope for Counard and his employees.

With the lack of sufficient help from others, Counard applied for the “ Barstool Fund .”

Portnoy created the “Barstool Fund” to help small businesses all across the country to stay afloat during these unprecedented times. With ties to Boston and New York, small businesses in those areas where among the first to be chosen for aid. With the help of Barstool employee, Liz Gonzalez, Portnoy saw Counard’s application.

Gonzalez, being a Packer fan, really pushed for The Abbey to be included in the Barstool Fund. After the application process concluded, Counard became aware that The Abbey had been selected to become apart of the fund.

Counard was able to stay open due to the aid from Portnoy and the donors to the fund. Counard attributes this to his “urgency” and “diligence” as well as something that Gonzalez called “Midwest Humility.”

With the help from Barstool Sports, Counard is able to continue to run his small business as well as continue his “Pay-It-Forward” program. Counard is also assisting in aiding the House of Hope, a program in Green Bay to help mothers and children who have experienced domestic abuse.

The Barstool Sports fund has raised over 33 million dollars and has assisted in keeping over 200 small businesses afloat. Counard stays in contact with many of these businesses all around the country.

Celebrities ranging from Aaron Rodgers, to Tom Brady, to Kid Rock have donated to the fund, to help keep our small businesses thriving.

It’s scary to think that both of the top seeds in the NFL Playoffs will be getting All-Pro players back in their lineup this weekend. Of course, the teams needed to see how these players responded to practice reps this week. The Green Bay Packers look to get both Za’Darius Smith and Jaire Alexander back. In the case of the Tennessee Titans, the Derrick Henry injury update has been positive.

The Green Bay Packers have their attention on a Super Bowl run, currently. However, the first Mel Kiper NFL Mock Draft of the season was released today, which leads us to look down the road a bit.

The Green Bay Packers were able to watch Wild Card Weekend from the comfort of their homes, as they rested and prepared for Divisional Round weekend in the NFL Playoffs. On top of being the top overall seed, the Packers look to be getting healthier headed into the weekend. On Tuesday, head coach Matt LaFleur gave a Jaire Alexander and Za’Darius Smith injury update that should make Packer fans quite happy.

Super Wild Card Weekend was mostly super boring. However, a San Francisco 49ers road victory against the Dallas Cowboys was one of the more exciting games on the NFL Playoff schedule. San Francisco dominated the majority of the game, and they ended up escaping with a win. However, the headlines weren’t all positive. There were many 49ers injuries in the game, including a Jimmy Garoppolo injury.

The Cincinnati Bengals have a massive NFL Playoffs matchup with the Las Vegas Raiders to kickoff Super Wild Card Weekend on Saturday. While all Bengals fans are ready to get their taste of playoff action, many have been waiting for a Tee Higgins injury update.

Black Monday in the NFL turned into a week full of firings, capped off with the Houston Texans firing David Culley today after just one year in charge. This is a controversial firing to most and should be seen as an unfair firing to all. However, the business of the NFL always wins. As I stated on the FlurrySports Podcast, this firing would only occur if they knew the person they wanted to replace him with. Almost immediately after the firing news broke, more Texans news came out that they would be targeting Brian Flores to become the new head coach.

The Green Bay Packers are one of the few teams that will be getting better from a roster standpoint as we head deeper into the NFL Playoff schedule. Last week, Green Bay welcomed back David Bakhtiari and Josh Myers on the offensive line. A couple of All-Pro players in Jaire Alexander and Za’Darius Smith have also ramped up their practicing. Now, we got a surprising Whitney Mercilus injury update that Packer fans can’t help but smile at.

For all who know and watch football, it’s obvious Davante Adams is the best wide receiver in the NFL. His release is legendary and his stats are great, but it’s his football IQ that speaks louder than his stats ever could.

Coming into Saturday’s game, the Wichita State and Memphis basketball teams couldn’t have been more different. While both still have the upside to win the AAC, they both took different routes to get to their matchup. Memphis had been struggling with consistency seemingly all season. Wichita State, on the other hand, outside of a bad loss to North Texas, has been one of the most consistent teams in the conference.

Needless to say, the Urban Meyer era did not go well in Jacksonville. As a result, there once again is a Jacksonville Jaguars head coach search. The next head coach will be walking into an organization that has devoted a massive amount of money to the team facilities. They will also inherit the 2020 first overall draft pick in Trevor Lawrence. With a top-two pick likely upcoming for this season’s draft, the team should also have a couple of young stars to build around.

Birth of the Rose Bowl | Today in Sports History

Today in sports history, one of the most famous and historic bowls of all time started in 1902. The matchup between Michigan and Stanford was the first-ever Rose Bowl played. “The Granddaddy of Them All,” the Rose Bowl, started in 1902 and has been played every season since 1916. It is the oldest current bowl game in the college football bowl season.

Today in sports history, the 2008 Detroit Lions became the first team to go winless in a 16-game season. With a 31-21 loss on the road to the Green Bay Packers, the Lions made sports history. The Lions were the first team to go winless over the course of a full NFL season since the Tampa Bay Buccaneers in 1976. For Tampa Bay, however, it was their first season as an expansion team. Unfortunately for the Lions, it was their second winless season, with the other coming back in 1942.

Today in sports history, the mighty Cleveland Browns matched up with the Baltimore Colts for the NFL championship. The game was held in Cleveland, Ohio and was the first football game to ever be broadcast by CBS.

Today in sports history, one of the worst trades in baseball history was agreed upon. On December 26th, 1919, the Boston Red Sox sold Babe Ruth to the rival New York Yankees for just $25,000. The trade would see Ruth’s career flourish and provide the Yankees franchise with multiple championships. On the Boston side, the “Curse of the Bambino” had begun and would last until 2004 when they finally won their next World Series.

Marcus Sasser Out for Season for Houston Basketball

This holiday season won’t be so cheery for fans of the Houston Cougars. News broke late Friday night that the Houston basketball leading scorer, Marcus Sasser, will miss the remainder of the season with a toe injury. There is no doubt that the loss of their leader will seriously hamper Houston’s chances of making another deep run in the NCAA tournament. The only question: by how much?

Today in sports history, New Orleans Saints running back Alvin Kamara etched his name into the record book with his six-touchdown performance on Christmas 2020. While Kamara has been known as both a rushing and receiving back, all six of his touchdowns in this game came on the ground. With his six-touchdown performance, Kamara joined Gale Sayers as two of a select group to ever score six in a game.

Packers Have 79% Chance to Get Top Seed | NFL Playoff Picture

The NFC has continued to separate themselves from the top to the bottom after a weird Week 15. Some upsets kept some teams in the hunt, while others have hurt themselves in the NFL Playoff picture with an embarrassing loss. The NFL had its first team lock up a spot in the NFL Playoffs this past week, with the Green Bay Packers clinching the NFC North.