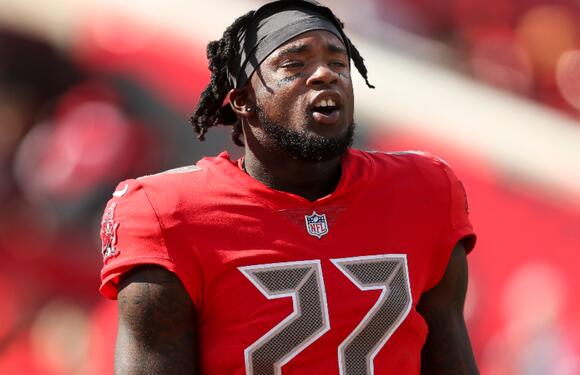 Ronald Jones fantasy owners have been taken on quite the ride this season. Question marks about his workload and snap share have been constant, until last week. Leonard Fournette was inactive and Jones saw 19 touches in the game.

Unfortunately, Jones’ fantasy Week 15 will not be as fun. The Tampa Bay Buccaneers running back underwent surgery on his pinkie finger, raising many unwanted questions for this week.

When Fournette was ruled a healthy scratch last week, Jones fantasy owners breathed a sigh of relief, then started the Tampa back. He came through, running for 80 yards and a touchdown. The game this week against the Atlanta Falcons would normally look nice too, as the Buccaneers should be able to handle business and use a healthy dose of the running game to close out the game.

However, Jones undergoing surgery throws a wrench into things. Due to the injury, Fournette almost certainly will be active this week, as Jones has a higher likelihood of further injury. So, the workload is going to be compromised. The other scenario is that they sit Jones altogether.

Following a solid fantasy performance last week, Jones may be a big reason why you’re still alive in the fantasy playoffs. Unfortunately, there is no scenario where he is a trustworthy start this week.

Since the season ended, there have been many Denver Broncos rumors about who the next head coach would be. Looking around at the NFL head coaching vacancies, there’s no doubt that Denver is among the best situations for a coach to walk into. Many believe the Broncos are a solid head coach and a quarterback away from being a playoff team that needs to be respected.

What the Miami Dolphins Must Address This Offseason

The Miami Dolphins started the 2021 NFL season off great with a win against the division-rival New England Patriots. After that, they couldn’t buy a win as they lost their next seven games. Something changed when they played against the Baltimore Ravens in front of a national audience on Thursday Night Football. Miami rattled off seven straight wins to get back into playoff contention down the stretch. Circumstances did not go their way and the Dolphins were eliminated from contention after a Week 17 loss to Tennessee. While Miami is certainly in better shape than several other teams that fell short of the postseason, there are still improvements to be made.

In the first PPV of the new year, UFC 270 lived up to the hype. The main card was filled with exciting finishes and fights that went to the later rounds. The PPV was capped off with back-to-back title fights. After winning in an impressive fashion, many have been asking how much did Francis Ngannou make? Let's take a look at the full UFC 270 payouts from Saturday's event.

It’s scary to think that both of the top seeds in the NFL Playoffs will be getting All-Pro players back in their lineup this weekend. Of course, the teams needed to see how these players responded to practice reps this week. The Green Bay Packers look to get both Za’Darius Smith and Jaire Alexander back. In the case of the Tennessee Titans, the Derrick Henry injury update has been positive.

The Green Bay Packers have their attention on a Super Bowl run, currently. However, the first Mel Kiper NFL Mock Draft of the season was released today, which leads us to look down the road a bit.

The Green Bay Packers were able to watch Wild Card Weekend from the comfort of their homes, as they rested and prepared for Divisional Round weekend in the NFL Playoffs. On top of being the top overall seed, the Packers look to be getting healthier headed into the weekend. On Tuesday, head coach Matt LaFleur gave a Jaire Alexander and Za’Darius Smith injury update that should make Packer fans quite happy.

Super Wild Card Weekend was mostly super boring. However, a San Francisco 49ers road victory against the Dallas Cowboys was one of the more exciting games on the NFL Playoff schedule. San Francisco dominated the majority of the game, and they ended up escaping with a win. However, the headlines weren’t all positive. There were many 49ers injuries in the game, including a Jimmy Garoppolo injury.

The Cincinnati Bengals have a massive NFL Playoffs matchup with the Las Vegas Raiders to kickoff Super Wild Card Weekend on Saturday. While all Bengals fans are ready to get their taste of playoff action, many have been waiting for a Tee Higgins injury update.

Black Monday in the NFL turned into a week full of firings, capped off with the Houston Texans firing David Culley today after just one year in charge. This is a controversial firing to most and should be seen as an unfair firing to all. However, the business of the NFL always wins. As I stated on the FlurrySports Podcast, this firing would only occur if they knew the person they wanted to replace him with. Almost immediately after the firing news broke, more Texans news came out that they would be targeting Brian Flores to become the new head coach.

The Green Bay Packers are one of the few teams that will be getting better from a roster standpoint as we head deeper into the NFL Playoff schedule. Last week, Green Bay welcomed back David Bakhtiari and Josh Myers on the offensive line. A couple of All-Pro players in Jaire Alexander and Za’Darius Smith have also ramped up their practicing. Now, we got a surprising Whitney Mercilus injury update that Packer fans can’t help but smile at.

For all who know and watch football, it’s obvious Davante Adams is the best wide receiver in the NFL. His release is legendary and his stats are great, but it’s his football IQ that speaks louder than his stats ever could.

Coming into Saturday’s game, the Wichita State and Memphis basketball teams couldn’t have been more different. While both still have the upside to win the AAC, they both took different routes to get to their matchup. Memphis had been struggling with consistency seemingly all season. Wichita State, on the other hand, outside of a bad loss to North Texas, has been one of the most consistent teams in the conference.

Needless to say, the Urban Meyer era did not go well in Jacksonville. As a result, there once again is a Jacksonville Jaguars head coach search. The next head coach will be walking into an organization that has devoted a massive amount of money to the team facilities. They will also inherit the 2020 first overall draft pick in Trevor Lawrence. With a top-two pick likely upcoming for this season’s draft, the team should also have a couple of young stars to build around.

Birth of the Rose Bowl | Today in Sports History

Today in sports history, one of the most famous and historic bowls of all time started in 1902. The matchup between Michigan and Stanford was the first-ever Rose Bowl played. “The Granddaddy of Them All,” the Rose Bowl, started in 1902 and has been played every season since 1916. It is the oldest current bowl game in the college football bowl season.

Today in sports history, the 2008 Detroit Lions became the first team to go winless in a 16-game season. With a 31-21 loss on the road to the Green Bay Packers, the Lions made sports history. The Lions were the first team to go winless over the course of a full NFL season since the Tampa Bay Buccaneers in 1976. For Tampa Bay, however, it was their first season as an expansion team. Unfortunately for the Lions, it was their second winless season, with the other coming back in 1942.

Today in sports history, the mighty Cleveland Browns matched up with the Baltimore Colts for the NFL championship. The game was held in Cleveland, Ohio and was the first football game to ever be broadcast by CBS.