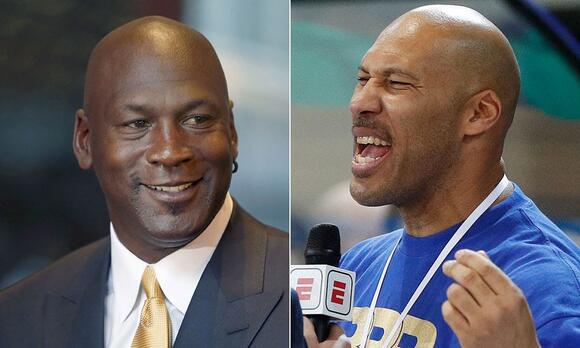 The 2020 NBA Draft occurred last week, and the Charlotte Hornets selected LaMelo Ball at third overall. As you would expect, this re-ignited the former narrative of Michael Jordan and LaVar Ball playing a game of one-on-one.

In hilarious fashion, Bovada Sportsbook has betting odds up, and Ball has better odds to win than you would think.

Back in 2017, at the height of Ball’s insanity, he went on First Take and argued that he would be Jordan in one-on-one. This was the moment where the infamous line “I’m undefeated, never lost” was born.

Jordan caught wind of this and had a hilarious line of his own. He said that Ball “couldn’t beat me if I was one-legged.” No stranger to trash talk, MJ also said this of Ball:

“You got to understand the source. I think he played college, maybe? … He averaged 2.2 points a game. Really?”

Michael Jordan is the majority owner of the Hornets and clearly has a say with their operations. This is why this story began to heat back up, following the selection of LaMelo Ball. “Tell MJ: Here we come! Tell MJ we’re coming,” said LaVar. We legitimately could see this go down at some point this season.

The USFL is five games into its 10-game inaugural season. By all accounts, everything has gone smoothly and to plan. The startup football league is using this season to show a proof of concept and prove live sports can draw an audience on streaming platforms as well, much like Thursday Night Football in the NFL will show this upcoming season. So, when uninformed critics of the USFL point to in-person attendance, it's clear they don't understand the business side of sports, as the USFL has been a success.

With his sights set on winning his 16th major, the PGA Championship 2022 on Thursday will be the next opportunity for Tiger Woods. We recently saw him make his miraculous return at the Masters, where he finished 47th.

The results of the NBA Draft Lottery are in! With the completion of the league's annual ping-pong ball extravaganza on Tuesday night, we now have a clear picture of the entire 2022 NBA Draft order. By virtue of winning the lottery, the Orlando Magic will be the first team on the clock in next month's draft. This marked the fourth time in the history of the lottery that the Magic won the rights to the No. 1 overall pick.

Injuries continue to be the worst part of sports. So, when someone is training for a big comeback from an injury, they often have a great deal of support behind them. This was the case for former Chicago Bears running back Tarik Cohen, who tore his ACL back in 2020. Now a free agent, all hoped for positive Tarik Cohen injury updates.

Phil Mickelson OUT of 2022 PGA Championship

Rams Have the Hardest NFL Strength of Schedule

They say it's harder to stay on top of that mountain than it is to get there. While nobody would say the Los Angeles Rams' Super Bowl season was an easy one, the NFL strength of schedule 2022 suggests it will indeed be tough for the Rams to repeat their success.

If you ever wondered which sport is truly king in America, today should tell you all you need to know. The NHL and NBA Playoffs are happening, with close, competitive series throughout. Yet, the NFL schedule release day is dominating headlines. Today, Cheeseheads everywhere will find out the Green Bay Packers schedule 2022.

We are a full month into the inaugural season of the USFL. There are many players around the USFL who have made a case for a promotion to the NFL. Now, former Alabama running back Bo Scarbrough is joining the league in hopes of doing the same.

The big wave of NFL Free Agency already swept across the league. We also recently completed the 2022 NFL Draft, which allowed many teams to fill obvious holes. However, there are still some wide receiver-needy teams and big-name NFL wide receiver free agents still available.

Few teams have much of a chance of making in-roads in the NBA Playoffs when forced to compete without their best player. The Philadelphia 76ers know this feeling all too well at this point. The Sixers suffered double-digit defeats in both Games 1 and 2 of their Eastern Conference Semifinals series against the Miami Heat. Notably absent from the 76ers’ lineup in both games was superstar center, Joel Embiid. Not only is he the team’s best player, but he is an NBA MVP Award finalist at that. Ahead of Friday night’s Heat vs 76ers Game 3 showdown, Philly got a very positive Joel Embiid injury update.

Usually, people in the media like to take a look back at NFL Draft classes from previous years and do a redraft. Of course, hindsight being 20/20 makes the puzzle much easier to put together. For this article, it's like we're dumping all of our Scrabble tiles into the bag and trying again, because we don't have a damn vowel. We will redraft the 2022 Green Bay Packers draft class, only picking players that were selected after where the Packers had draft picks.

With the 132nd overall pick in the 2022 NFL Draft, the Green Bay Packers draft Romeo Doubs, wide receiver out of Nevada. The Packers had an obvious need at wide receiver and a desire to get faster at the position. With their selections of Christian Watson and Doubs, they have certainly gotten faster. Let's take a closer look at the Packers' newest wide receiver.

The first two days of the 2022 NFL Draft are complete, with Rounds 4-7 taking place today. The Green Bay Packers entered the draft with obvious holes and a large collection of draft picks to fill them. The Packers draft picks have been met with mixed feelings and different Packers draft grades amongst the fanbase. On Friday, the Packers selected Christian Watson and Sean Rhyan.

Packers Draft Targets For Day 2 of the NFL Draft

The Green Bay Packers stayed put during the first round of the 2022 NFL Draft. They clearly had an agenda, drafting two quick, athletic players from the University of Georgia, Quay Walker and Devonte Wyatt. We have the Packers draft grades for those two picks here.

The first round of the 2022 NFL Draft is in the books. Surprisingly, the Green Bay Packers stayed put, making their picks at No. 22 and 28. The Packers draft picks were met with mixed feelings and different Packers draft grades amongst the fanbase. The organization has made it three first-round Georgia Bulldogs in a row, with them selecting linebacker Quay Walker at No. 22 and defensive lineman Devonte Wyatt at No. 28.

It's finally here — Christmas for football fans! The first round of the 2022 NFL Draft kicks off tonight, Thursday, April 28th. It's unique that a draft for a sport garners more headlines than sports that are actually in-season, but that's the power the NFL has. Here, we will show you how to watch the NFL Draft for free tonight, regardless if you have cable television or not.

The 2022 NFL Draft kicks off tonight, and it's like Christmas for those of us who nerd out about football, scouting and team-building. This draft in particular seems unique. Not only is the narrative that this is a weak quarterback class, but many of the early-round teams don't have a pressing need for a passer either. That is why everyone is having so much fun creating their own 2022 NFL Mock Draft.

Jimmy Butler Out With a Knee Injury For Miami Heat

The NBA Playoffs have already provided many memorable moments. Unfortunately, injuries continue to cast an ugly shadow over what is always the most exciting part of the NBA season. In an unexpected development on Tuesday afternoon, the Miami Heat ruled Jimmy Butler out for tonight with a knee injury.

Everyone is finishing up their mock drafts, with the 2022 NFL Draft kicking off on Thursday, April 28th. One of the most popular is the Matt Miller NFL Mock Draft from ESPN. He recently did a full seven-round mock draft, making his selections for every pick in the draft.