The president's visit to Surfside comes after the search and rescue operation was suspended due to safety fears. 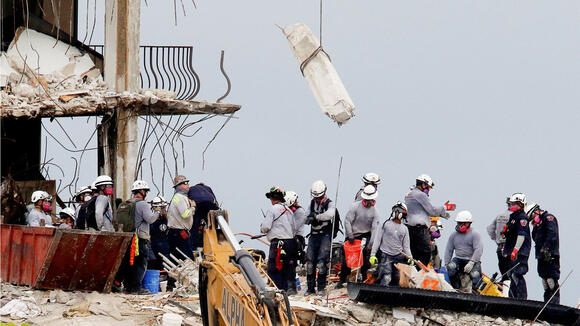 US President Joe Biden has visited the families of those affected by last week's apartment building collapse in Florida.

Mr Biden's visit came after the search and rescue effort at the 12-storey Champlain Towers South was suspended due to safety concerns. It has since resumed.

Eighteen people are confirmed dead but 145 are still missing and are feared to be trapped in the rubble.

Mr Biden said hopes of finding survivors - a week after the collapse - were dimming but a miracle was still possible.

"Hope springs eternal," he said during a news conference after comforting relatives of those dead and missing.

He added: "The whole nation is mourning with these families.

"They see it every day on television, they're going through hell."

Some relatives had asked him "heart-wrenching" questions, such as whether they would even have remains to bury or cremate at a funeral, he said.

"I sat with one woman who lost her husband and her little baby boy and didn't know what to do."

Earlier in the day, Mr Biden met officials, including Florida's governor Ron DeSantis, offering them "whatever you need", adding that he expected the federal government to pay for temporary housing for survivors.

The operation was suspended in the early hours of Thursday after movement in the debris prompted fears that part of the building still standing could collapse.

Miami-Dade County Mayor Daniella Levine Cava said the search would resume "as soon as it is safe to do so".

Nobody has been found alive in the wreckage since the early hours after the disaster in Surfside.

Miami-Dade County Fire Chief Alan Cominsky said rescuers had heard a female voice for "several hours" last week but after an extensive search for the victim "eventually, we didn't hear her voice anymore".

The cause of the building's collapse is being investigated but a 2018 report prepared by an engineering firm warned that the 136-unit complex suffered from strucural problems.