Writing and living in Kansas. Retired journalist. Writing about local things, but not much about politics. 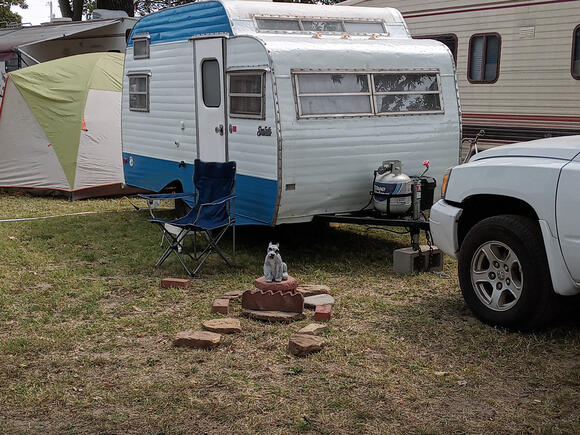 It’s the calm before the storm at the Walnut Valley Festival in Winfield, KS. It kicks into high gear tomorrow morning with four stages cranking out bluegrass and folk music from early in the morning to late at night. There are also some national and international competitions in the mix.

I survived the landrush last Thursday and have been camping since then. There have been a few thousand campers like me, who have been here almost a week. As great as the musicians are on the main stages, my favorite thing is the music around the campfires at night. These are regular people like me and some of them are really good musicians.

The landrush was less scary than I thought it might be. This is where the fabled land rush into Oklahoma happened more than 100 years ago, and it is a similar idea. They open the gates to the campgrounds and you go find your spot and park.

I was in the fourth wave that was let into the campgrounds and was a little surprised that there was a lot of open space. I decided to not be picky. I parked in the first flat spot I found and called it good enough. It turned out to be a pretty good spot.

There is some competition for the best sports. Some people have been coming for 40 years and have their favorite spots. Even so, if someone got there first, it doesn’t matter how long have camped in that spot.

What surprised me was the attitude of people. There is competition, but there is also a spirit of cooperation. I didn’t see anyone arguing about spots. I saw people helping each other, sharing extension chords, water connections, and everything else.

There are still campers arriving, and there are a lot fewer spots available.

A lot of people parked their campers at landrush and went back home to their jobs. For a couple of days, there were campers everywhere and not all that many people. People are back now and it's crowded in a cool sort of way.

Writing and living in Kansas. Retired journalist. Writing about local things, but not much about politics.

Freelancers Will Be Hurt By Labor Proposal

Contract labor is a good deal for both publishers and writers. The ruling is shocking and could change the freelance world for writers.photo by Colton Sturgeon on Unsplash. A new proposal by the Biden Administration could wreak havoc on freelance writers. The new rule would make companies consider most gig workers employees, not contract labor, as they are currently considered.

The Rocket 88 was the first muscle car, light weight with a powerful engine.Photo By James Jordan. I saw an Oldsmobile Rocket 88 at the recent Last Run Car Show in Arkansas City, KS. I thought about the song “Rocket 88” by Jackie Brenston. Many people, myself included, think this was the first true rock and roll record.

Bing Futch with his Mountain Dulcimerphoto by james jordan. No one has more fun on stage than Bing Futch. He is a joy to watch. He is a fine musician, but what makes it even more enjoyable is the energy and enthusiasm that he exudes in his performance. You might enjoy his show, but you won't enjoy it as much as he will enjoy performing it. He will be one of the featured performers at the 50th Walnut Valley Festival in Winfield the third weekend of September.

Holding Law Enforcement Accountable Is Not a New Idea

The star of law enforcement in the old west.Photo by Glen Carrie on Unsplash. Police use too much force in apprehending a criminal sometimes. What is too much is debatable, especially when the person resists arrest or flees. It is not a new issue though. 100 years ago in a small Kansas town, a sheriff was held accountable for beating up a nearly blind man over a bad check.