A Love Letter to Funky Door, a Berkeley Studio 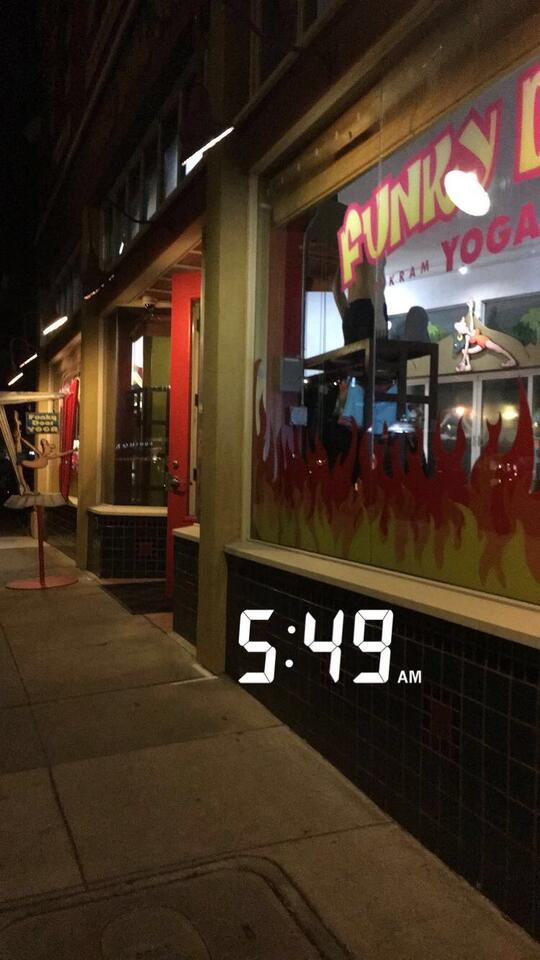 As more folks get vaccines and more studios and gyms open up, we're counting down for Funky Door, a local hot yoga/Bikram studio to re-emerge, hopefully soon.

Need more info? Read on. Bikram yoga is a 90-minute series of twenty six postures. The temperature in the studio is typically 104°F with 40% humidity. The studio I go to (pre-COVID-19) heats the room (a very brightly lit, carpeted, glass and mirror-encrusted chamber of doom) to at least 109°F. I see that thermostat at 114°F more often than I’d like to tell you. Don’t worry! Sometimes the teacher walks to the door (to which I cling, sucking cold air through the sill) and opens it for a second, and a fan recirculates the air with some cold mixed in. By cold I mean whatever normal-temperature air is in the hallway. Or they might go over to one of the large windows leading to the lobby and crack it—I kid you not—maybe half an inch.

The yoga teacher is also not your typical yoga teacher. Through Bikram* training, the teacher has memorized a 90-minute script and every teacher everywhere says the same words. I like it. It’s comforting. They say things like:

I went to my first class about a year ago. I couldn’t believe what I was hearing. These commands were insane. Toweling my sweating face, I even felt angry that they would expect anyone could touch their elbows behind their locked knees as their upper body folded completely over their legs while standing. (p.s. some people can) (p.p.s. being able to kiss your knees is an awesome feeling).

Here are the yoga moves I can’t do perfectly (other than all of them): Dandayamana Janusirsana, or Standing Head-to-Knee Pose;  Standing Separate Leg Head to Knee Pose, Dandayamana Bibhaktapada Janushirasana; Sit Up ( Pada-Hasthasana); Rabbit Pose, or Sasangasana.

Here are the yoga moves where I have a nice time! Utkatasana, or Awkaward Pose; Garudasana, or Eagle Pose; Dandayamana-Dhanurasana, or Standing Bow-Pulling Pose (I used to not be able to balance at all and now I can almost hold on for the whole time. It’s just so hard, I whine.); Toe Stand, or Padangustasana; Camel Pose, or Ustrasana; and obviously, Corpse Pose or Savasana.

Savasana is an important one, and some classes my chief focus is staying still in savasana and between poses. It keeps me focused on what’s important, which sounds cheesy but I’m talking about breathing.

I go to yoga between zero and three times per week. It’s expensive, so I castigate myself frequently for not going, as is normal. In fact, it’s 6 am right now and classes started twelve minutes ago, but I’m writing this instead! Ha!

The Secret to Bikram Yoga (and Life!)

After twenty classes or so, I found the secret to Bikram yoga. It’s in the trying and the trusting. I have to believe that if I try my absolute best in this posture, that in the next one I’ll be taken care of because different muscles will get to !!!burn!!!. So I try to do what the instructor says, but I know for some poses I can’t and I probably never will.

For example, since I had scoliosis surgery at thirteen, I have been a super-fly woman with two titanium rods and eighteen screws running along my spine and a dope scar on top. There’s nothing I haven’t been able to do! Except round my spine. It’s physically impossible for me to do that. Basically, I think I’m rounding my back as I do Separate Leg Head To Knee pose, but I look over to the mirror and realize a family could eat dinner on it with zero spillage. I talked with a teacher about this and she said to just do my best. “There are no alternative postures,” she said with a laugh that sounded exactly like Emperor Palpatine’s.

Here are some first-timer tips for Bikram yoga

*While many people associate Bikram Choudry, the founder of this type of yoga, with sexual assault (as is right), it is conscience-appeasing to know that when he and his wife divorced, she came away with the Bikram Yoga empire. So, when you go to BY, she’s getting your cash (30for30 podcast). (Please note: I’m in the process of fact-checking this more thoroughly)

I can't wait to return! What about you?