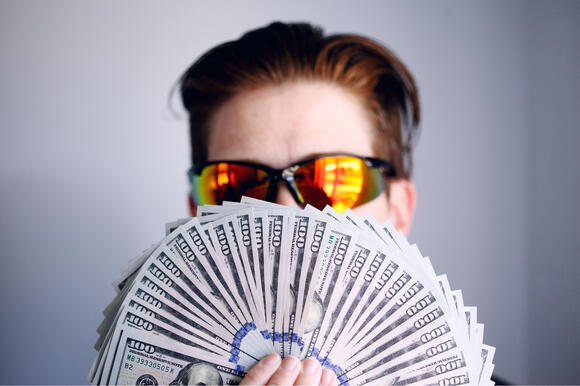 F. Scott Fitzgerald once said, "Let me tell you about the very rich. They are different from you and me." As someone who was once married to a man from a wealthy family, I can attest that this is true.

My now EX-husband is used to a way of life that seems bizarre to me. For example, his parents give him $5000 a month just for existing.

As his ex-wife, sharing custody of our two children with him, you would think that I would see some of this money.

That is not the case.

It goes into his account as a "gift." His father writes him a check every month. My child-support payment is deduced from his teacher salary at a private school.

He earns $40,000 a year as a high-school science teacher and gives me what is viewed as adequate in child support in the state of California.

It’s really not. I struggle to provide for our two children who live with me almost full-time.

I have them five days a week and my ex-husband just has them on the weekends. When he does take our kids, he stays at my place, using my electricity and eating my food.

It's not fair that my ex-husband gets a ton of money from his family but takes advantage of me, giving me very little in child support.

My ex was unemployed when we divorced.

I knew my ex-husband was from a wealthy family soon after I met him. He mentioned that his parents were giving him a "disbursement" every month.

This isn't a trust fund. The disbursement consists of the profits from his family's investments, so they don't have to pay taxes on them.

When my ex and I married, his parents continued to give him money, but it was never declared to the IRS. When we divorced, he didn’t declare any of the money that his parents were giving him in our settlement.

In fact, at that time, he wasn’t working at all. As he was unemployed, I got stuck with this tiny bit of money in child support.

Now that my ex is getting remarried and wants to buy a house, his parents have started giving him even more money: $5,000/month.

This way he can show the bank he has this kind of liquid cash in his bank account.

But it feels so unfair to me.

How I found out that my ex is getting all this money from his parents.

My ex-husband is quite absent-minded and often talks on the phone on speaker while he's at my place. I overheard him talking to his parents about the $5,000/month they're giving him as a gift.

It made me so angry that he and I had a huge argument about it. I started crying and the kids saw.

I've just had to get it in my head that I’m stronger as somebody who actually makes her own money. I’m coming back to life after my divorce. My ex isn’t growing as a person because he lives off his family.

I’ve also had to come to terms with the fact that life isn’t fair. Divorce isn’t fair. You’re never going to really feel like you’ve received what's just from your ex.

I've had to move on in life and be happy with what I do have.

I have my dignity.

Research shows that divorce hits women far harder financially than it does men. The United States Government Accountability Office’s Special Report to the Senate released a study showing that a woman’s household income plummets by an average of 41% after a divorce. A divorced man's household income only falls by half as much.

Opinion: Not Every Mom Loves Being a Mom

We're fed the lie that women are supposed to love motherhood. As women, we're told that motherhood is supposed to fulfill us. Once we have a baby, we'll feel whole. We'll feel completed. This is what we're on this planet to do: to become mothers.

My Ex-Husband Was Scammed Out of $9,000 by a Woman on a Dating Site

I just watched The Tinder Swindler on Netflix. If you haven't seen it, it's a new documentary that recounts the story of a man who scammed multiple women around the world out of hundreds of thousands of dollars.

I’m going to be honest with you: my relationship with my ex-husband is a mess. We don’t get along. This has created a lot of unwanted stress in my life. I look back on my decision to marry my ex and see it as a bad one. Actually, it's the worst decision I've ever made in my life.