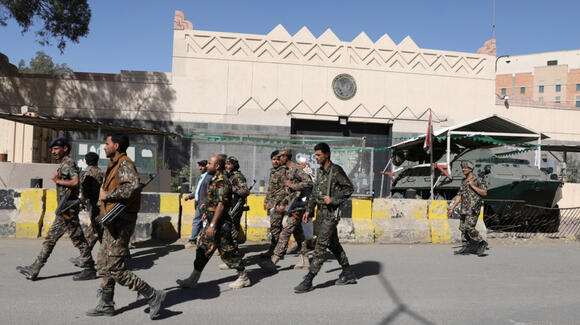 The U.S. embassy in Yemen was breached by Iran-backed Houthi rebels, kidnapping 25 Yemeni staff, the State Department confirmed on Thursday, on Veteran's Day in the U.S.

'We are concerned that Yemeni staff of the U.S. Embassy in Sana’a continue to be detained without explanation, and we call for their immediate release, as well as the equipment they took, and that they vacate the property immediately. The United States has been unceasing in its diplomatic efforts to secure their release,' a State Department spokesperson told DailyMail.com.

The official said the majority of them have already been set free but that 'the Houthis continue to detain some Yemeni employees of the Embassy.' The rebels also took equipment, documents, and supplies from the compound.

Three weeks prior, 22 people who primarily 'worked on the security staff guarding the embassy grounds' were kidnapped, driving the question of whether the U.S. was increasingly becoming a target around the world.

The United Nations Refugee Agency (UNHCR) described it best, saying, 'Yemen’s civil war began in 2015 as a result of clashes between Yemeni government forces and the Houthis - also known as Ansar Allah.'

The conflict in Yemen has lasted seven years as of this year and forced a humanitarian crisis that has cost tens of thousands of lives and millions to the brink of starvation. More than 66 percent of the population was in dire need of humanitarian assistance in 2020, but Yemen was the most vulnerable country in the Middle East even before the current crisis. Things like food, water, shelter, and basis health care were lacking and now, as the conflict continues, are even more out of reach.