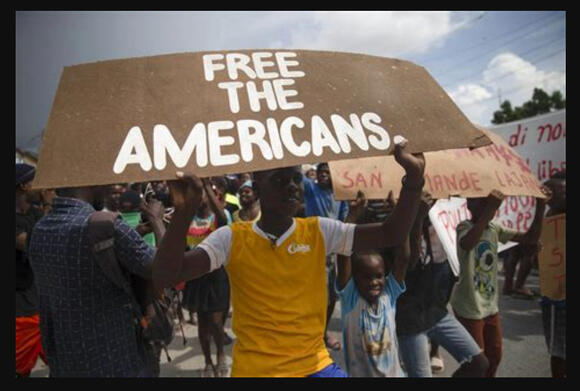 November 16th will mark 30-days in captivity for the missionaries. It seems the U.S. hasn't deployed all of its resources and continues to slowly negotiate with the 400 Mawozo gang via the Haitian government.

Information given to the general public by U.S. officials is sparse at best.

The U.S. government announced this week that they have "seen proof that at least some members of the group of American and Canadian missionaries kidnapped in Haiti last month alive," according to a senior Biden administration official. Adding, "the President is being briefed daily on law enforcement effort."

The official, who declined to be named when asked by Reuters, did not give further details.

U.S. officials have led the efforts to rescue the missionaries, who were on a trip organized by an Ohio-based Christian Aid Ministries to work at an orphanage.

Liszt Quitel, Haiti's interior minister, and Chenald Augustin, a spokesman for the office of Prime Minister Ariel Henry, did not respond to requests for comment to Reuters.

A Haitian man claiming to be the leader of the 400 Mawozo gang believed by security officials to have conducted and organized the kidnapping said in a video posted on YouTube in October that he would kill "these Americans" if his demands of 1 million per person were not met.

According to security experts, the 400 Mawozo is reported to have been a band of small-time local thieves, rising to become one of Haiti's most feared gangs, controlling all territory east of the capital Port-au-Prince.